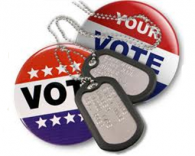 This year, overseas voters in Alabama, Arkansas, Mississippi and South Carolina will cast ranked choice voting ballots in all federal primaries that might go to a runoff, while thousands of overseas or out-of-state military voters from Louisiana this November will cast ranked choice voting (RCV) ballots in any of their November elections for the U.S. Senate and U.S. House that have more than two candidates. FairVote has helped introduce RCV (also called instant runoff voting) to elect mayors and city councilors in more than a dozen American cities.

This sensible innovation protects the voting rights of thousands of our armed forces personnel, along with other voters overseas. It also allows states to keep their runoffs closer to together – an important consideration for in-person voters, as FairVote’s review of all federal runoffs over the past two decades shows a clear correlation between lower runoff turnout and longer runoff seasons.

The process is eminently simple. Voters are sent two ballots before the election. On the first ballot, they indicate a single choice. This ballot is counted in the first round. On the second ballot, they rank candidates in order of preference. In the event of a runoff, the second ballot is examined, and each ranked choice ballot is added to the totals of the top-ranked candidate who has advanced to the runoff. South Carolina reports that in 2012, more than nine in ten overseas voters who returned their ballot for the first round had their ballot count in the second round – a far higher rate of ballot-counting than runoffs overall, where fewer than seven in ten first round voters on average come back to vote.

The latest adoptions have followed vigorous enforcement of recent changes in federal law. In 2009, Congress amended UOCAVA when it passed the Military and Overseas Voter Empowerment Act (“MOVE”). Among other provisions, MOVE mandated that states send timely requested absentee ballots to military and overseas voters at least forty-five days before federal elections. Alabama and Mississippi were among four states holding primary elections in 2014 with potential runoff elections less than forty-five days after the primary. Holding runoffs so soon after the first round helps in-person voter turnout, but creates problems for overseas voters without the use of RCV ballots.

Last month, Mississippi’s Board of Elections preempted a lawsuit by the U.S. Department of Justice (DOJ) by adopting RCV ballots for military and overseas voters. Last year Alabama was sued by the DOJ for noncompliance with the MOVE Act as it prepared for a special election to fill a U.S. House seat. A federal judge ordered Alabama to use a ranked choice ballot for overseas and military voters – the state’s requested remedy – for the primary election in fall 2013. This year, Judge Thompson expanded his order to cover the Republican primary in the 6th Congressional District in Alabama in 2014, as it was the only one of Alabama’s primaries with more than two candidates. The state is moving quickly to implement the new system.

FairVote’s outreach about Louisiana’s ranked ballot innovation was the catalyst for its adoption in both South Carolina and Arkansas. We created a basic website about the idea and helped inspire Springfield, Illinois to put it on the ballot. Springfield voters approved ranked ballots for overseas voters by a nine-to-one margin, Illinois passed a law creating this policy as a local option, and Springfield now uses the system.

Far more cities should adopt the ranked choice ballots for their overseas voters. Last year, FairVote offered testimony about the proposal to the presidential voting commission, with a particular focus on local elections that aren’t covered by UOCAVA, but often have even shorter turnarounds for their runoffs. In 2011 FairVote legal intern Cynthia Okechukwu did an excellent legal analysis that effectively addressed concerns about equal protection of voters, and in 2012 Rob Richie coauthored a Roll Call commentary with leading early voting specialist Paul Gronke on the idea of having ranked choice ballots for overseas voters built into the presidential nominating process.

The use of RCV ballots is a positive step for military and overseas voters – and one that suggests the broader value of a ranked choice ballot for all voters, given the typical low turnout and increased taxpayer burdens of two-round runoffs. We applaud Alabama, Arkansas, Louisiana, Mississippi and South Carolina for their efforts in implementing a RCV system for military and overseas voters and we urge all jurisdictions to consider ranked choice voting as a general substitute for plurality voting rules and runoff elections.