The Bottom Line: Democratic presidential candidate Barack Obama earned an average of 44% of the vote in South Carolina in 2008 and 2012, but Democrats won only one of its seven House seats. Drawing a map with maximum compactness without regard to race or partisanship might seem likely to generate a fairer outcome. Instead, Republicans would have a big edge in five districts, a clear edge in one and an even chance of winning the remaining seat. Only a fair representation voting method would guarantee fair outcomes - and at the same time uphold the Voting Rights Act better than single-member district plans.

Our representative democracy is undercut by partisan gerrymandering, with elected officials blatantly helping their friends and hurting their enemies rather than acting as umpires serving the public interest. Independent redistricting systems have been proposed as a solution to the problem of gerrymandering, but the fact is that even "fair" redistricting is still unfair to many voters. Alone, it will not deliver the vibrant representative democracy our nation needs. South Carolina provides a great example of the limitations of independent redistricting, but also illustrates its great value when combined with the adoption of fair representation voting methods.

After the 2011 redistricting process and 2012 elections, South Carolina Democrats are significantly underrepresented in their congressional delegation. FairVote's statewide partisanship data shows that in a nationally even election, 43% of the voters prefer Democrats to Republicans, with Barack Obama earning an average of 44% of the vote in 2008 and 2012. If the outcome of congressional elections were proportional, Democrats would regularly earn three of the state's seven congressional seats. 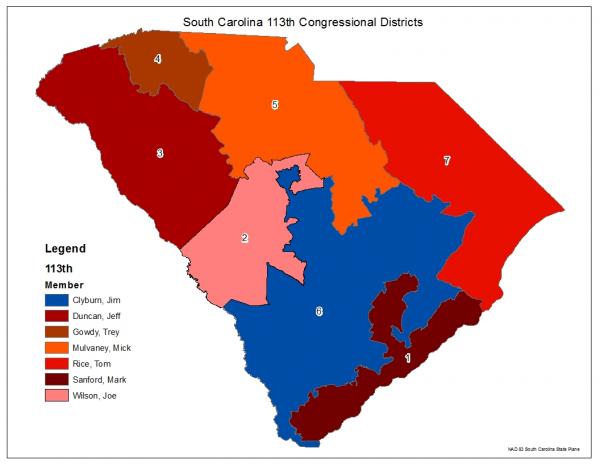 But that's not what happened in 2012. Only one seat was won by a Democrat, with every other district won by a Republican by at least ten percentage points in districts carried easily by Mitt Romney. The sixth district is the only Democratic-leaning district - and it is heavily so, a majority African-American district that regularly delivers large margins of victory to longtime incumbent Jim Clyburn.

South Carolina Republicans controlled redistricting and produced a map that strongly favors their party. One might assume that an independent redistricting commission would provide fairer outcomes. But it's not so simple, given the constraints of where people live and the expectation that a fair plan would be geographically compact.

To illustrate the challenges of creating a fair map using single-member districts, we drew a sample nonpartisan redistricting plan for South Carolina. The following criteria were used:

Racial and partisanship data were not considered when drawing the districts, to demonstrate what a nonpartisan map might look like without the Voting Rights Act. The map was analyzed in terms of partisanship and race after the lines were drawn, however. 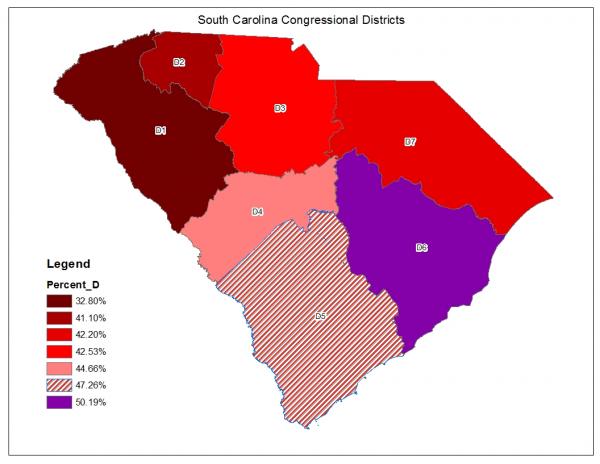 The chart below details the racial and partisan makeup of each district in this nonpartisan map. Race is measured by the overall population provided in the 2010 census. Partisanship is defined using FairVote's partisanship index that is based on the vote relative to the national average in the 2008 presidential election in each district.

It is worth noting that this map is just one of countless possible single-member district maps that would fulfill the criteria used here, some of which could theoretically be more favorable to Democrats. However, unless the map is being specifically drawn with the intention of creating more Democratic seats (which would violate the criteria of most independent redistricting processes), a map similar to the one presented here is the most likely outcome. 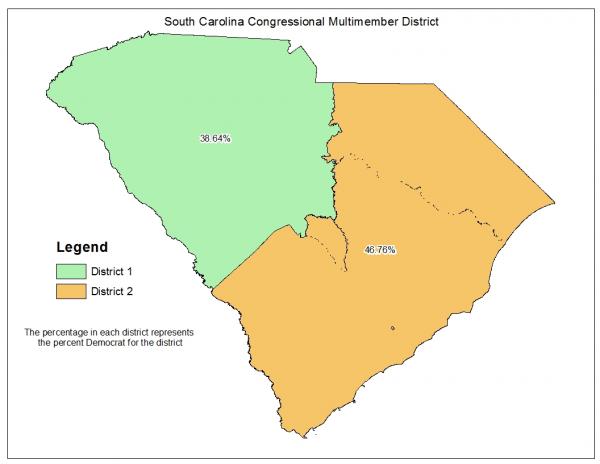 As the map and chart above show, the new fair voting plan would be a far more representative reflection of the people of South Carolina. In the 1st super district, Republicans would be sure to win two seats, Democrats would be sure to win one seat and the final seat would be a swing seat. That swing seat would most likely be won by a moderate member of either party, as their election would depend on winning the support of the 20% of voters in the district who are most moderate. African American voters in the 1st multimember district would also have the voting power to elect a preferred candidate, as the black population is over the threshold needed to win a seat.

The second super district would elect one member of each party and the third seat would be a potentially competitive seat with a lean toward Republicans. Again, the winner of that third seat would have an electoral incentive to represent the middle third of voters in the district. This super district would also be nearly certain to elect a representative preferred by black voters because their voting percentage is well over the threshold needed to win a seat.

Under this fair representation voting plan, Republicans would reliably win at least three seats, Democrats two seats, and two seats would be regularly in play. Two candidates backed by African American voters would win, more fairly reflecting their share of the electorate. All parts of the state would have representatives of both major parties.

This plan would be a far more meaningful improvement over South Carolina's current congressional map than a single-member independent redistricting plan. It would lead to a congressional delegation that better represents the state in the House of Representatives, with Members who are more responsive to their constituencies back home and more willing to work with their colleagues of the other party.