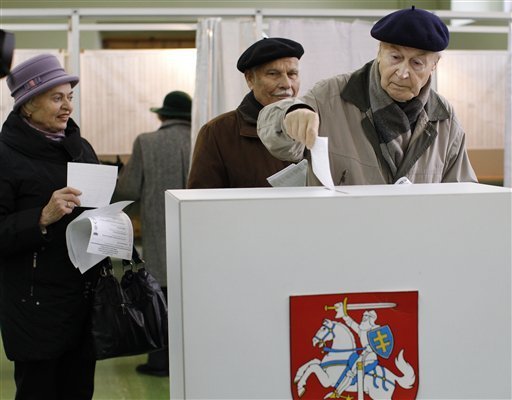 Lithuanian voters at the ballot box on Sunday / AP

In Lithuanian national elections held on October 14th, the opposition left-wing Labor and Social Democrats parties won the most votes, making the end of Prime Minister Andrius Kubilius's conservative government likely. The results have been attributed to a backlash against austerity policies and tax increases instituted by the government in the wake of the European debt crisis. Labor, the Social Democrats, and the Labor and Order party are expected to form a governing coalition once the results of the second round of the election become official.

The reason the election is not yet over is that Lithuania uses a two-round runoff system to elect roughly half of its legislature (71 of 140 members). These members are elected from single-seat constituencies, and if no candidate receives an absolute majority--over 50%--of the vote in the first round, then a runoff election between the two highest vote-getting candidates is held two weeks later. Usually, more than half of the single-member seats require a runoff. For the remaining 70 seats, an open list proportional representation system is used. Unlike in some "mixed member" systems, the proportional seats are not used to make overall representation in the legislature reflective of each party's support.

There is a lot to like about the Lithuanian electoral system. Open list proportional representation is an excellent method of ensuring that the preferences of voters for both parties and candidates are accurately represented in the composition of parliament. For the single-member districts, a two round system is preferable to a plurality system because it will always lead to winning candidates having the support of the majority of voters. Furthermore, the short two week period between the first and second rounds is helpful, as it makes a significant drop in voter turnout due to a loss of interest less likely--a phenomenon that often occurs in U.S. runoffs in which there is a gap of several months between the first and second rounds of voting.

The Lithuanian system is not perfect, however. The fact that half of the legislature is elected from single-member districts creates inherent distortion in the makeup of parliament. For instance, in the 2008 elections, the top two vote-getting parties were both politically center-right: Homeland Union -- Lithuanian Christian Democrats and the National Resurrection Party. Each received a similar percentage of the vote--20% for the former and 15% for the latter. However, Homeland Union ended up with 45 seats to National Resurrection's 16 because of a huge discrepancy in their success in the winner-take-all single-seat constituencies.

Electing Lithuania's entire legislature using open list PR, or using a mixed member PR system (in which distortions caused by geographic constituencies are compensated for so that final composition of the legislature mirrors national vote percentages), would better represent the views of its people in government and improve Lithuanian democracy.