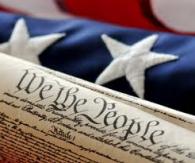 The plan for a popular vote to elect the president continues to make headlines around the country as new public opinion polls showing favor for such a plan emerge. Meanwhile, critics continue to decry the opinion of the American people and the National Popular Vote plan.

One such opponent is Hans A. von Spakovsky. On, October 26th, he wrote an article for The Washington Times, entitled "Protecting Electoral College from popular vote".

Spakovsky's broadside is of the classic tabloid variety with extravagant tales of mishap. The bulk of this article and his argument begin,

Their stealth campaign - dubbed the "National Popular Vote" (NPV) plan - proposes an interstate compact in which participating states agree to allocate their electoral votes to the winner of the national popular vote, regardless of the popular vote results in their states or whether the candidate even qualified to be on that state's ballot.

He gives a valid effort to define the National Popular Vote plan. It is, correctly, an interstate compact that states sign agreeing to allocate their electoral votes to the candidate who wins the most popular votes nationwide. Yet, he calls the plan "stealth". A plan that began with a Washington Journal appearance on CSPAN, a National Press Club news conference in 2006, and has involved very public efforts to secure the support of more than 2,000 state legislators.

Misleadingly, he also suggests that voters care more about which candidate wins the state than the presidency.  I think most would agree that voters are more likely to wake up happy on the morning after an election if their candidate has won the presidency, even while losing the state, than vice versa.

In a national popular vote system red and blue states do not exist. Every single ballot cast in every single state is counted toward the nationwide tally of votes for presidential candidates. No one is misrepresented or unrepresented. Rather, everyone and their vote counts. Everyone knows the rules, and a super-majority of voters want exactly this kind of election for picking their president.

Spakovsky goes on to say,

The NPV will go into effect as soon as "states cumulatively possessing a majority of the electoral votes" needed to win an election (270) join the compact. This would give the most populous states a controlling majority of the Electoral College, letting the voters of as few as 11 states control the outcome of presidential elections.

Spakovsky couldn't be more wrong if he added two and two together and got five. Once a total number of states comprising the equivalent of 270 electoral votes sign the compact, Americans will be electing their president through a national popular vote in all 50 states (plus DC)- not just the states that signed the compact. It is an absolute impossibility that only those states which signed the compact can control the outcome of the election with a majority of electoral votes. Americans will be voting for the candidates, not electors.

He also suggests that only 11 states can come together to pass the compact and put it into place, but a number of small population states have already passed it. The NPV plan will not be enacted with just 11 states. Rather, it will be adopted when a broad mix of states adopts it - just as proponents have said all along.

Interestingly, he neglects to mention that under the current rules, which he defends, a candidate can actually win a plurality of the vote in those 11 largest states, losing heavily everywhere else - and still become president.

It would undermine the protections of the Electoral College, elevating the importance of big urban centers like New York and Los Angeles while diminishing the influence of smaller states and rural areas. That was a major reason for establishing the Electoral College in the first place: to prevent elections from becoming contests where presidential candidates would simply campaign in big cities for votes.

Spakovsky describes our current system, which ignores smaller states, less-populated areas, and emphasizes only a minute portion of the nation, otherwise known as "swing states." Previous blog posts on analysis of rural areas and small states, as well as the influence of big cities , effectively demolish any suggestion that the current system helps small states and rural Americans. They also explain how, under the NPV plan, votes count equally in what becomes a "swing nation," and candidates seek every vote they can get.

Spakovsky goes on to claim that the Electoral College also reduces the possibility of recounts and that such recounts would become a "nightmare" under the NPV plan. In his words,

Contrary to the claims of opponents, recounts under the NPV would be both more prevalent and more problematic... Suspicions necessitating a recount in just one jurisdiction would be an incentive for a national recount since every additional vote found anywhere in the country could make the difference to the losing candidate.

Recounts occur because of small margins of win, typically a difference of 5,000 votes or less, although a legitimate contestation of the election result can be made for up to 50,000 or less. Despite what critics argue, the likelihood of recounts occurring under a National Popular Vote system are statistically, drastically decreased because of the larger population from which results are determined.

It is also wrong to say that a recount is any "easier" in one swing state than the nation as a whole. In fact, as shown by the unresolved dispute in Florida in 2000, and in other contentious recounts like the 2008 U.S. Senate race in Minnesota, a close race in one state is highly problematic for having a clear winner.

Spakovsky completes his article by associating the Electoral College system with the Founders' grander plan of representative democracy, stating that it protects minority rights, balances power, and provides orderly elections.

The NPV strikes directly at the Founders' views of federalism and a representative republic that balances popular sovereignty with structural protections for state governments and minority interests.

While the Electoral College has been in place since the time of the Founding Fathers, the winner-take-all rule has not. Winner-take-all is the element of the system that impedes the balance of power and encourages candidates to favor certain states and citizens over others.

What the Electoral College really represents is state authority over picking the president. The National Popular Vote plan is grounded in states exercising that power, reflecting what their voters want.

We live in a country dramatically different -culturally, socially and politically - than the founders. We cannot continue to ignore the modern day, negative repercussions of a winner-take-all, state-by-state system that leaves more than half of states and citizens as spectators in presidential elections. All Americans should matter.