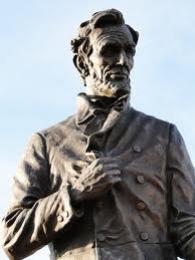 The Political Context in Illinois

A Fair Voting Alternative in Super-Districts

Time for an Honest, Proportional, and Fair System: These controversies demonstrate the way in which the current system is inadequate: it fails not only to represent accurately the people of Illinois but reduces voters to mere pawns in a grand political game designed to benefit party elites rather than the people. Especially in states affected by reapportionment, there is the impulse to engage in gerrymandering and other highly undemocratic maneuvering.
In contrast to the Illinois state legislature’s politically motivated plan, FairVote's alternative puts voters first. Rather than use a winner-take-all system, which accentuates the effects of redistricting and encourages partisan jockeying, FairVote’s plan combines these gerrymandered districts to form multi-member “super districts” in which a fair voting system can allow far more voters to elect a favored candidate. As our analysis will demonstrate, FairVote’s alternative plan generates competitive elections in every single district and allows for fuller representation of the political and demographic dynamics of geographical areas: what we call “shared representation.”
Under the current winner-take-all system, candidates must receive over 50% of the vote to be sure of winning a seat. Consequently, substantial voting blocs are often left unrepresented. For instance, one party’s candidate could get just one vote shy of the 50% threshold, and all of her voters would lose out on representation. Similarly, if a voter lives in a district that widely favors one party, that voter might feel like his vote does not matter, especially if that voter favors the less popular party.
With fair voting based in super-districts, on the other hand, nominees from more than one party are nearly certain to represent a district, which enables a more accurate representation of the broad spectrum of political opinion. These multi-seat super-districts also lower the threshold for racial minorities to select a preferred candidate.

Several candidate-based forms of fair voting, notably choice voting and cumulative voting, have been upheld by the courts and fit well with our traditions. Choice voting systems, in which voters rank candidates in order of choice in at-large elections, helped break the power of urban political machines in New York and Cincinnati. It is used currently by Minneapolis in citywide elections. From 1870 to 1980, members of the Illinois House of Representatives were elected using cumulative voting, where voters can cast as many votes as there are seats. Using this fair voting system, nearly all of the districts elected both Democrats and Republicans in every election.

Our Illinois plan upholds U.S. Supreme Court rulings on apportionment while providing fair representation and voter choice for California voters. Fair voting plans in super-districts are legal for congressional elections under the U.S. Constitution, but Congress would need to repeal a 1967 law mandating single-member districts. State and city governments often have the power to adopt fair voting systems under current law. 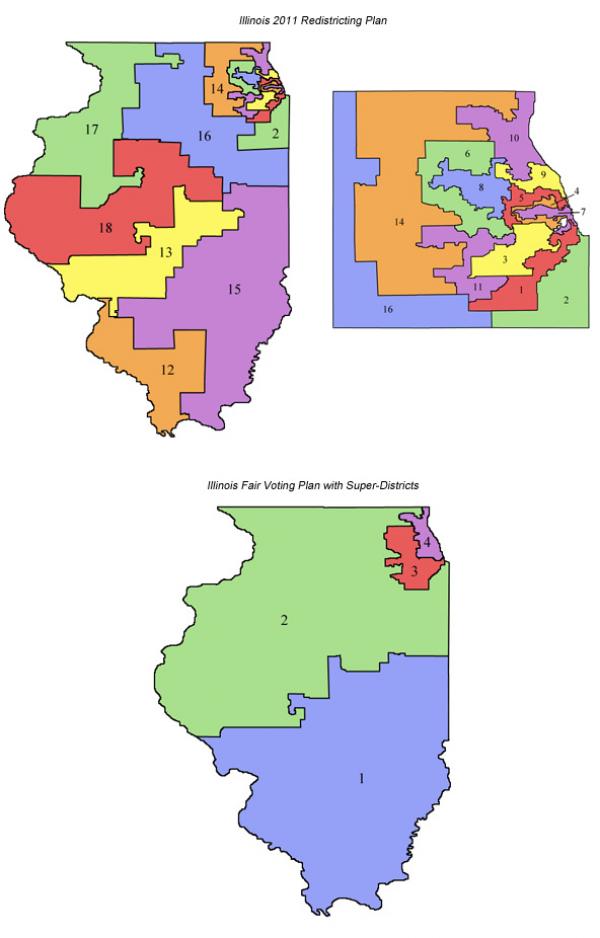 Partisanship Analysis: Based on the 2008 presidential election, Illinois has a partisanship index of 58.85% Democratic. The recent plan passed by the state legislature is likely to generation representation that will not reflect the state’s overall partisan split. Based on district partisanship, the Illinois plan would result in 11 Democratic seats (nine safe and two lean), two safe Republican seats, and five toss-ups.
For the congressional delegation to reflect accurately the Republican statewide partisanship index of 41.2%, the GOP would need to win seven seats.  However, under the gerrymandered Illinois plan, Republicans can secure safely only two seats. For the Republicans to win the seven seats, their candidates would need to succeed in all five toss-up districts. This presents a daunting challenge for the GOP every election year, regardless of the party’s national momentum.
Illinois Plan’s Partisanship Breakdown
*Partisanship percentages are based on an interpretation of the 2008 presidential election. Our source for the data is DailyKos.com. The seats were allocated according to the following ranges: toss-up districts have a partisanship between 46% and 54%, leaning seats have a partisanship between 54% and 58%, and safe seats have a partisanship greater than 58%. This does not reflect incumbent advantages.
In stark contrast, the FairVote super-district plan accurately represents the state’s partisan divide. With a fair voting system, both major parties would be well positioned to win at least one seat in every super-district. Republicans would have a clear advantage to win five seats and be well positioned to add between one or two seats based on the quality of their candidates and the national partisan swing. Democrats would have a clear advantage in nine districts and a reasonable chance to add up to three more. FairVote’s plan also increases voter interest, since almost all Republican and Democratic voters will be able to elect a candidate in their district, who represents their political views – and have a real choice within their party’s candidates as well.
Once in Congress, representatives from opposing parties would share constituents of super districts and, therefore, have new incentives to cooperate on at least some legislative initiatives. As far as competition, the current Illinois plan offers five competitive districts, but a strong incumbent can make elections in that district uncompetitive; in the super-district plan, every voter experiences a competitive election in every election.
While these partisan breakdowns are based on the current two-party duopoly, the FairVote proposal would open the door for third-party and independent candidates, unlike the single-member district winner-take-all plan. Challengers to the major parties are rarely able to acquire over 50% of the vote, so those voters are typically left unrepresented. FairVote’s super-districts lower the threshold and provide third parties and independents with a better chance to win seats. The FairVote alternative is not just fair for Democrats and Republicans; it is fair for voters of all political opinions.
FairVote Plan's Partisan Breakdown

Race and Voting Power: Under Illinois’ redistricting plan, the state’s four representatives of color are well positioned to remain in office; however, the plan does not offer opportunities for racial minority representation outside of these four majority-minority districts. The three majority black districts have elected the state’s three African American representatives, and they maintain their majority-minority status with this new plan. Although Latinos have become the largest racial minority group in the state, they have the power to select a preferred candidate in just one of the state’s 18 districts. The state’s sole Latino representative, Luis Gutierrez, keeps his Latino majority district intact, but the Latino community lacks the voting power in other districts to elect a candidate of choice.
If Illinois’ congressional delegation reflected the demographic consistency of the state (14.5% black and 15.8% Latino), then both black and Latino communities would have the voting power to elect two preferred candidates each. FairVote’s plan combines these highly concentrated minority districts with other predominantly white districts, but the super-district approach actually enhances opportunities for racial minority groups.
In the FairVote plan, Latino communities meet the threshold in two super-districts, allowing them to elect at least two preferred candidates. Black communities do not technically meet the threshold under this super-district plan, but they do have strong opportunities to elect a candidate in at least three super-districts. With three popular African American incumbents, the state has a strong chance to keep its African American representation under this alternative system. In addition, black voters are well positioned to be influential in Super-District 1, where their population is more than half of what it takes to be able to win a seat. While the current Illinois plan allows for racial minority representation in four districts, there is no real chance to gain more seats. The fair voting alternative creates many more opportunities for racial minorities to select a candidate who will address their interests in Congress.
Illinois Plan Race Breakdown

Although Illinois Democrats clearly engineered a partisan gerrymander, electoral problems do not rest solely with Democrats and Republicans. Rather, the dysfunction lies with the winner-take-all nature of single-member district elections, which allow district lines to determine most outcomes no matter how they are drawn. In this analysis, we have not touched the blatantly partisan lines that were our building block; we merely changed the rules and showed that fair voting systems in super-districts pay out immediate dividends to all voters.

If the redistricting games of winner-take-all continue, voters are likely to become even more disenchanted with our political system. Under the Illinois redistricting plan and many others like it across the country, a vast amount of voters are left unrepresented. Many of these congressional elections lack competition or offer just two candidates to the diverse array of voters. It is also clear that one candidate cannot possibly reflect the makeup of her district, as winner-take-all assumes; therefore, we need a new approach will more accurately reflect the makeup of each state. By adopting fair voting in multi-seat super-districts, we can attain a more representative democracy.