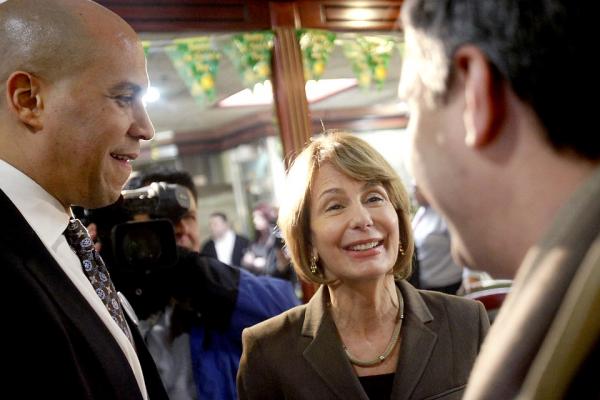 Democrats and Republicans across the nation should take a page from Newark Mayor Cory Booker's playbook by backing female gubernatorial candidates in primary races. Booker is lending state Senator Barbara Buono his support as she campaigns in Newark to be the Democratic candidate for New Jersey Governor. With only one sitting female governor, Democrats should be making every effort enhance the number of democratic women in gubernatorial races.

High profile endorsements in primaries races can improve the probability that female candidates enter general elections. All four female, Republican governors (Jan Brewer, AZ; Mary Fallin, OK; Susana Martinez, NM; Nikki Haley, SC) owe their success, in part, to Sarah Palin who endorsed them in their primaries, dubbing these candidates Mamma Grizzlies. Though women, as a group, prefer Democrats, a point illustrated by an 18% gender gap in the 2012 election, no democrat of Gov. Palin's influence has made similar primary endorsements.

Booker is relatively well known and has a real chance of being the first African American elected to the U.S. Senate since Barack Obama's Illinois win in 2004. But while Booker's endorsement may be significant in his home state of New Jersey, he doesn't seem to be making gender an issue anywhere else. The only Democratic Party figures likely able to match Palin's 2010 level of influence are former president Bill Clinton and former Secretary of State Hillary Clinton.

According to a recent poll, 57% of Americans say they would back Hillary Clinton's candidacy for president. Nevertheless, the Clintons have been slow to throw their weight behind individual, female candidates, particularly in primary races. That means Gov. Palin, who is often ridiculed by many feminists, has done more to advance women in high office than Hillary Clinton - resulting in Republicans having four times as many governors in office as Democrats.

High profile endorsements are helpful to female candidates but cannot be the overall answer to the issue of low representation. The solution doesn't rest only in endorsements of individuals, but rather in party policies that create gender-conscious rules and institutions. To achieve gender parity, major parties must identify and adhere to practices that advance female candidates on all levels of government. In Sweden, for example, party rules have led directly to women holding 45 percent of the seats in its national legislature. Most of its parties promote gender parity through measures like requiring men and women to be alternated on their party lists for legislative seats.

Before assuming that such requirements would never gain support in the United States, consider that both the Democratic National Convention (DNC) and Republican National Convention (RNC) have adopted party rules to promote gender parity in selection of their leaders. Since the 1970s, the RNC has reserved one position for a man and one for a woman from every state and territory and require women to hold several key executive positions. The DNC also mandates gender parity for all leadership positions within the party's committees and associations.

We need more high profile, elected officials to follow Gov. Palin's example by regularly recruiting and supporting female candidates in primaries - as Booker is in New Jersey. But it's time for parties to embrace more comprehensive plans for promoting gender parity. Parties need to write their own playbooks. Writing better rules is the first step.