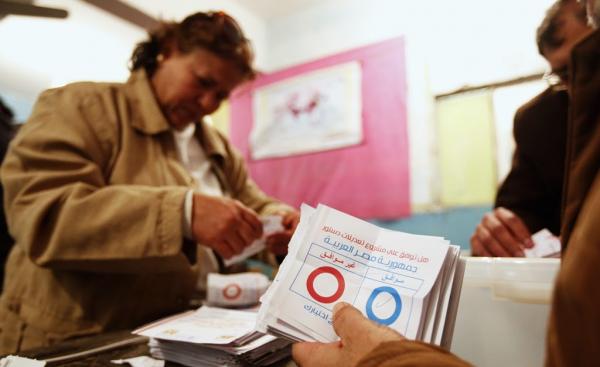 The Arab world is rife with political change this month: Egypt overwhelming voted in favor of a new constitution last week in a referendum backed by the military interim government, and Tunisia is in the process of drafting its own new constitution. Both documents hold the promise of a more democratic future, but leave some questions of electoral fairness unanswered.

In Egypt, following widespread public protests against the presidency of Muslim Brotherhood-backed Mohamed Morsi, the military ousted the president in July 2013 and suspended the constitution. The interim government subsequently appointed a committee to heavily modify the 2012 constitution.

The new constitution contains some fundamental changes to Egypt's government. A requirement for 50% of parliament to be composed of workers and famers, and the entire upper house, the Shura Council, have been eliminated. While still acknowledging a basis in sharia law, the constitution removes any specific definition of the concept, and bans explicitly religious political parties. The practical effect of that provision would be to enshrine the exclusion of the Muslim Brotherhood from Egyptian politics in the constitution. Since the Muslim Brotherhood-supported Freedom and Justice Party won a plurality of votes in the 2011 general election, that exclusion seriously calls into question the legitimacy of Egyptian democracy.

From a voting systems perspective, it is unclear what effect the new constitution will have.

After the resignation of Hosni Mubarak in 2011, Egypt adopted a parallel voting system - with a mix of winner-take-all and proportional elements - which was in place until the military interim government dissolved the legislature following the July 2013 coup. As we previously discussed,  the 2011 general election produced a parliament that was vastly more representative of the population than ever before. In the parallel system, seats in the legislature were elected in two different ways: two-thirds of seats were elected via party-list proportional representation, while the remaining one-third of seats was elected through winner-take-all, single-member districts.

The newly-approved constitution does not specifically establish an electoral system to be used; it only requires that any electoral system provide for "fair representation of population [...] and equal representation of voters." This lack of specificity leaves room for the Egyptian government to implement an improved electoral system, as compared to the parallel system used under the Morsi government. Adoption of German-style compensatory mixed-member proportional representation would lead to a parliament more reflective of the will of the voters. Such a system, which FairVote describes as "Districts Plus" when proposed for U.S. elections, avoids the distortion caused by the parallel structure by ensuring that the total number of seats each party gains in the legislature is reflective of the national party vote.

Tunisia has seen a comparatively peaceful few years since its 2011 revolution. Its Constituent Assembly, elected to develop a new constitution after the fall of President Zine El Abdine Ben Ali, has been drafting a new constitution since early 2012. While the process has been slow and characterized by gridlock and disagreement between secularist and Islamist factions, it has avoided erupting into violent conflict like Egypt.

The Constituent Assembly faces a similar situation to Egypt: its current draft constitution does not specify an electoral system for elections slated for later this year. Especially considering the recent compromise and cooperation between parties in the drafting of the constitution, a proportional representation system would seem to be optimal for Tunisia. In its 2011 Constituent Assembly election, a closed-list proportional representation system with multi-member districts was used, resulting in a high level of proportionality. The moderate Islamist party Enhanda won a clear plurality of the vote (37%), but did not win a majority of seats as the Freedom and Justice Party did in Egypt, forcing it to work with more secular parties. Maintaining and improving on that system under the new constitution could help Tunisia continue on the path toward a stable and free democracy.