On May 12, voters in the first congressional district of Mississippi went to the polls to vote for a new Member of Congress in the wake of the unfortunate death of Congressman Alan Nunnelee. Grounded in the U.S. Constitution, no person has ever served in the U.S. House without being elected, so Mississippi needed to fill the seat with a vacancy election. Mississippi has an admirable law governing special elections n its inclusiveness, but it would be all the better if combined with ranked choice voting.

Courtesy of the invaluable Ballotpedia, below are the election results. Under Mississippi law, special elections for Congress are held without primaries. As in Louisiana's elections for Congress and state offices, all candidates instead go straight to the general election ballot -- meaning every voter gets to consider every candidate. If any candidate secures more than half of the votes, we have an immediate winner. If not, all but the top two candidates are eliminated, and there is a runoff. 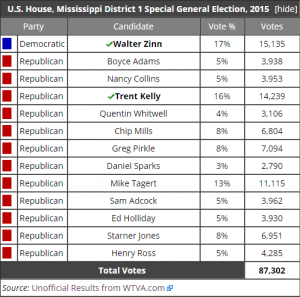 This fractured field on May 12 certainly deserved a runoff election, which will be held on June 2nd. The runoff can be so close to the general election because Mississippi allows its overseas voters to cast a ranked choice, "instant runoff" ballot before the first round, with each overseas ballot counting in the runoff for whichever finalist is ranked higher on the ballot. See Drew Spencer's explanation last year of this sensible practice that was done in five states for congressional elections in 2014.

But here's the problem with the current way Mississippi structures its system -- one that is endemic to any such "top two system." The first congressional district is heavily Republican -- one with a partisanship  index, according to our Monopoly Politics report, of 64.4% Republican. With such lopsided partisan balances, as is true of most congressional districts due primarily  to natural "sorting" that has gone on among voters in recent decades, the district is a slam dunk win for any Republican facing a Democrat.

Indeed, in the May 12th election, the only  Democrat in the contest, Walter Zinn, won just 17% of the vote. But with 11 Republicans also seeking the seat, Zinn's 17% was good enough for first place, and in a plurality, British-style "first past the post" election, it would have given him the victory. With a majority runoff requirement, however, Zinn will now face the top Republican, Trent Kelly, who won 16% of the vote. Kelly is widely predicted to win easily and then keep this safe seat in the future.

This result is far from atypical with top two runoff results. That is, it's extremely common for a candidate of the second biggest party in a district to advance to the top two runoff. Washington State has had 56 Top Two elections for congressional and statewide partisan elections, and all but two involved a Republican facing a Democrat, and only one had two candidates of the same party in the runoff.

When that happens, the underlying partisanship kicks in, and most such contests are boring, predictable affairs -- meaning that all the real action was determining which candidate associated with the majority party advanced to the runoff. In California and Washington, that truly decisive election has the added problem of occurring with a highly  unrepresentative electorate -- one that is significantly older, whiter, wealthier and  more partisan than the general election electorate that then simply rubberstamps the preordained outcome determined by what has happened in the primary.

Imagine if Mississippi  had taken its insight into the value of ranked choice voting ballots for overseas voters and extended ranked choice voting to all voters. They could have chosen a winner in a single round this week, with the winner potentially being Kelly, but also possibly another Republican if that candidate had proven better at reaching out to backers of other candidates as they were eliminated during the count (a "bottom's up" method where the last-place candidates is defeated, and that person's votes are then added to the totals of the candidate listed next on each ballot),

Alternatively, Mississippi still could have had a runoff, but advanced four candidates -- in this case Democrat Zinn and Republicans Kelly, Tagert and Perkel. Those four candidates would all have had a chance to make their case to the voters a second time, and  the ultimate winner in this safe seat would have truly had to proven themselves worthy and able to win the support of more voters. I made the case for a "top four" ranked choice voting system at our Democracy Slam last month, and was pleased to see such a good response to it from judges and the audience.