Last month, the state of Massachusetts took a huge step forward in promoting fair and equitable voting rights by passing H. 4072, an omnibus elections bill geared towards modernizing Massachusetts’ elections. Highlights from the bill include the introduction of pre-registration, early voting, and online voter registration.

Until recently, Massachusetts, was among the worst states in the country in terms of voter access. Coming into the 2012 election cycle, Massachusetts was ranked 42nd in the nation by Rock the Vote’s “Voting System Scorecard.”The Scorecard ranks states based on factors such as  voter registration, casting a ballot, and young voter preparation. 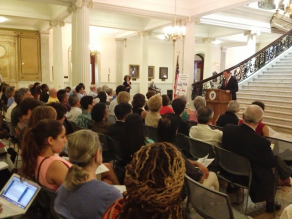 Frustration with antiquated voting practices led to the formation of the Election Modernization Coalition. Spearheaded by the ACLU of Massachusetts, 45 organizations have joined the coalition and become active in the dialogue surrounding pro-suffrage policies. For nearly a decade, these organizations have been coordinating both lobbying and grassroots efforts to alert voters and lawmakers of Massachusetts’ electoral short comings.

Regarding the passage of the bill, Senator Finegold said, “Every time anyone who might not have participated in the process is now given a chance, we are moving democracy forward, and our Founding Fathers would be proud.”

There is much to be proud of: not only did the bill enact early voting, pre-registration for 16- and 17-year olds, and online voter registration, it also established post-election audits of voting equipment and the creation of an Election Task Force to pursue improved voting rights in the Bay State. The passage of H.4072 is a big step toward rectifying the state’s record on voting rights – the reforms bumped Massachusetts from 42nd to 10th on the Rock the Vote Scorecard. As early supporters and promoters of pro-voter reforms like pre-registration, FairVote is encouraged by the state’s endorsement of this policy.

That being said, there is still work to be done. The Election Modernization Coalition has several reforms, such as same day registration, that were left out of the final draft of the bill. Ongoing efforts of the Election Modernization Coalition and the creation of an Election Task Force should pave the way for even more legislation to ensure fair and equitable voting in Massachusetts. 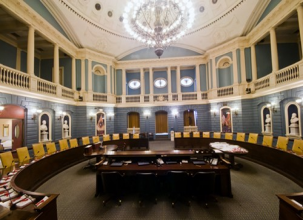 In recent history we have seen a wave of legislation that has sought to limit ballot access nationwide. The passage of H.4072 represents an inflection point in the fight for voting rights, seeking to expand access to voters rather than limit participation. Anne Borg, of the Massachusetts League of Women Voters, said “At a time when too many states are making it more difficult for citizens to register and vote, Massachusetts should be proud to be moving in the opposite direction.”

H.4072 policies reflect the values of FairVote’s Promote Our Vote project. This campaign strives to bring communities together under the belief that voting is a fundamental democratic right. It works with local organizations and elected officials to implement reforms that increase voter turnout, protect voting rights, and expand suffrage for people of all walks of life. The grassroots nature of change in Massachusetts captures what Promote Our Vote is about – local action catalyzing a more fair and representative democracy.