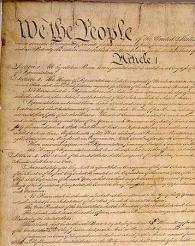 When naming important holidays, Constitution Day will not make most people’s shortlist. But maybe, it should.   We will be celebrating September 17th of this year, thanks to late Senator Byrd (D- W. VA), the self-appointed Senate’s Constitution scholar who is said to have carried around a pocket edition of the Constitution, and read it with such frequency the only document he read more often was his bible.

Constitution Day deserves more attention, because while this holiday could be seen as the whim of a quirky scholar, it addresses a real concern in American society- that more people know the inner workings of American Idol voting than of voting for an American president.  Only a third of Americans can name all three branches of government and when asked as to what they do, most school children know simply that the judicial branch “adjudicates” without any idea what “adjudicates” actually entails.

According to a provision attached to the Consolidated Appropriations of 2005 by Senator Byrd, Constitution Day requires all school districts receiving federal funding to instruct students on the U.S. Constitution on the designated day.  Outside of this mandate, schools have a great deal of freedom in deciding how to observe the holiday.  This flexibility provides an excellent opportunity for teachers to encourage and educate students about the importance of voting.

Today, some states don’t allow young people to register to vote until they turn 18. Others allow young people to register to vote if they will be 18 before the general election. There’s a new movement afoot to increase youth registration sparked largely by policy reports and outreach by FairVote. Noticing how easy it would be to register students in school or at the DMV when they get their first driver’s license, several states now allow pre-registration for teens as young as 16 (Florida, Hawaii, Maryland, North Carolina, Rhode Island, and Washington, D.C) .

However, the general lack of uniformity is confusing to young people, who are required to research their state’s laws and find a place to register on their own.  Educators and administrators in states lacking a uniform age also have trouble establishing systematic policies designed to register young people to vote and introduce them to voting mechanics. Because of the low voter registration and participation among young people, it is imperative that election registration laws allow educators to inform interested students while still in the classroom.

One way to honor our Constitution would be to make it a day to celebrate representative democracy – starting with preparing young people for their future role as the foundation of American self-government. This Constitution Day, we hope educators will take time to reach out to high school students, and explain local election registration laws and policies.  Many people want to have a voice in government; they just simply have never been informed of where to go to register to vote and when they can do so.  Programs like this are not only free and a practical way of teaching about American government and the 26th Amendment, but will have a real impact on upcoming elections.

Additionally, Constitution day is a prime opportunity to contact local representatives and to make sure your state joins others in allowing 16 and 17 year old voter pre-registration.  Voter pre-registration would require no software updates, would challenge no Constitutional amendments, boost voter turn-out, and allow systematic, nonpartisan, school based voter registration drives to target not just graduating seniors, but juniors and many sophomores as well.  This early education is particularly important for young people who will not go on to college, a demographic who is nearly twice as likely not to vote than college educated young people.  By reaching out to a vocal and tech-savy generation early, we can help create a generation of voters who more routinely participate in government with a better understanding of how policies and agencies impact their day-to-day lives.

Sen. Byrd once said, " Our Constitution is not a mere dry piece of dead parchment, but a revered and living document that has helped inspire our nation to achieve seemingly impossible goals and to keep alive irrepressible hope, even in the face of unanticipated and sometimes unbearable adversity."

As the cornerstone of all American law and policy, the Constitution needs to be understood by citizens for the living document it is, one which enumerates our most valued rights and privileges and establishes a mechanism to increase those protections. Let’s help the next generation vote. Happy Constitution Day.