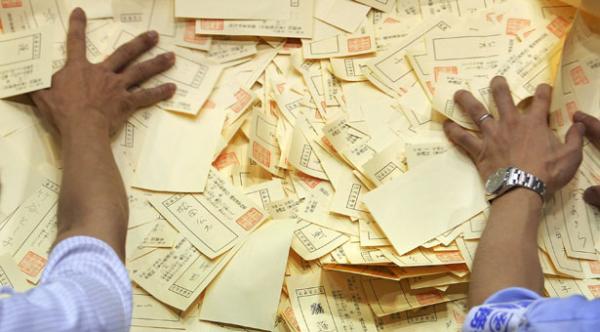 On March 26, Okoyama's High Court ruled that Japan's 2012 lower house elections were invalid. The case followed several other similar decisions by courts throughout Japan, including from the Hiroshima High Court the day before and from Tokyo's High Court on March 6. The issue of contention is the apportionment of representatives to voters - that is, the relative weight that each Japanese voter receives in terms of seats in the legislature. In the 2012 election, some voters - mostly those in rural districts - had as much as 2.34 times as much voting weight as others.

The apportionment crisis is undoubtedly damaging to the legitimacy of Japanese democracy. All votes should, indeed, carry roughly equal weight. But malapportionment is not the source of the most pernicious unfairness in the Japanese electoral system. Japan uses a parallel system for electing its lower house, analogous to the similarly problematic Egyptian system we critiqued last month. While 180 of the Japanese parliament's 480 seats are elected through closed list proportional representation, the remaining 300 representatives are elected in winner-take-all, single member districts. In a parallel system, proportional representation seats do not compensate for distortions caused by winner-take-all seats.

There was plenty of distortion left uncorrected after December 2012. The story of the election was that the Liberal Democratic Party (LDP), which had held power almost without interruption since 1955 before finally being defeated by the Democratic Party of Japan (DPJ) in 2009, bounced back to win the election in an apparent landslide. The LDP and its coalition partner, the New Komeito Party, now control a supermajority of more than two-thirds of seats in the House of Representatives, which would seem to imply broad popular support for their policy proposals. In reality, the LDP actually received about four million fewer votes in 2012 than in their 2009 defeat.

That's partly because voter turnout decreased significantly in 2012 from 2009, but the LDP still received less than 28% of the PR vote and less than 40% when combined with the vote share of New Komeito. That's a higher percentage than any other party or coalition, but far from a majority - much less a supermajority - of nationwide support. The distortion stems from the fact that the LDP won 79% of the winner-take-all seats that comprise the bulk of the House.

LDP leader and current Japanese Prime Minister Shinzo Abe has translated his party's plurality support into an aggressive policy agenda, confronting China over the Senkaku Islands and implementing a dramatic economic stimulus program. Regardless of the merits of these policies, they were not voted for by most of the Japanese electorate. Yet because the House of Representatives can override any veto by the upper House of Councillors, voters will not even have the power to affect Abe's policies in this July's upper house elections.

Malapportionment may have contributed to the distorted outcome in 2012, but significant distortions can easily occur in single-member district systems regardless of whether there are equal numbers of people in each district. Japanese electoral reformers should be most concerned with eliminating the parallel nature of Japan's voting system. One option that Japan could consider is moving to what FairVote calls a "districts plus" system, where the 180 proportional seats would be allocated to parties to compensate for any distortions caused by the single-member district elections. Similar systems are used in national elections for countries such as Germany and New Zealand, and are typically referred to as "mixed member proportional representation." Incredibly, even allocating all 180 proportional seats to non-LDP parties would not have been enough to give each party the seats they deserved based on their share of the proportional vote, but it would have at least forced the LDP to form a coalition to control a majority of the House.

Districts plus systems not only guarantee more representative governments, but they also greatly simplify the districting process. If every vote counts equally towards the composition of the legislature, the import of where district lines are drawn is significantly lessened. Cases of malapportionment in Japan and partisan gerrymandering in the U.S. would be rendered inconsequential under districts plus. The Japanese courts are right to be taking action to correct the flaws in the Japanese electoral system - but simply redrawing district lines is not enough to ensure fairness.