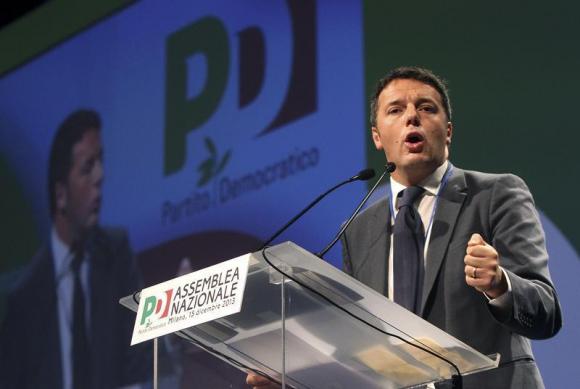 Update: FairVote has continued to study the new law closely. In light of Italy's history of coalition instability, the law could be significantly improved by increasing the threshold of support a coalition would need to avoid a runoff election. If it was closer to 50% than the current 37%, the governing coalition would more certainly reflect majority acceptance, while still preserving many values of proportional representation. Voters would able to support candidates, parties, and coalitions that more accurately reflect their views, voters in all regions would have meaningful choices and shared representation, and historically underrepresented groups like women -- now holding nearly a third of seats in Italy -- would continue to do better than their counterparts in winner-take-all systems.

Since Italy’s inconclusive general election last February, the political situation in the country has only become more chaotic. In the last year, former Prime Minister Silvio Berlusconi (now leader of the new Forza Italia party) was convicted of tax fraud, and Prime Minister Enrico Letta faced a vote of confidence in Parliament. Letta was subsequently forced to cede leadership of the Democratic Party, and the Prime Ministership, to Matteo Renzi.

Renzi, confirmed as Italy’s new Prime Minister in February, recently struck a deal with Berlusconi to reform Italy’s political system, with the ultimate goal of revitalizing the country’s stagnating economy. Beppe Grillo, the comedian-turned-leader of the newly-formed 5-Star Movement, an anti-establishment party that made major inroads last election, claims that the reforms would only serve the interests of political players in the major parties. Before evaluating the merits of Renzi’s proposals, however, it’s important to remember what makes Italy’s current political system so problematic.

Under the current electoral system, members of the Chamber of Deputies are elected proportionally, with the 617 seats divided among 26 multi-member constituencies. Before seats are proportionally distributed, however, the pre-election coalition that wins the plurality of votes is guaranteed 55% of the seats, even if the actual share of votes won was much smaller. In the 2013 general election, for instance, the center-left coalition now led by Renzi won 29.5% of the votes, as compared to the Berlusconi coalition’s 29.2%. Due to Italy’s winner-take-all law, the center-left coalition gained 55% of the seats in the Chamber, a distortion of over 25%.

The Senate, by contrast, is elected regionally—the coalition with a plurality in any given region receives 55% of that region’s seats. This resulted in less vote distortion in 2013 than the method used in the Chamber, but also prevented the Senate from having a majority government. Beyond the electoral system, the Senate has historically been an impediment to governmental stability due to its legislative power being equal to the Chamber’s, requiring any coalition to control both houses to effectively govern (much like the Senate and House in the United States).

To address the chronic instability that has characterized Italian politics for years, Renzi has pledged to reform Italy’s political system. He has two main objectives: to “boost stability, strengthen the 'two-party' mechanism, and put an end to small parties' veto power,” and to strip the Senate of its legislative power. Renzi has yet to submit a finalized proposal, but has won a vote of confidence in the Chamber.  In addition to his drive to abolish the Senate, the most-discussed aspects of his plans include doubling the threshold of votes parties need to be awarded seats, from 2% to 4% for parties in coalitions and from 4% to 8% for individual parties outside of coalitions.

These reforms would not provide an effective solution to Italy’s electoral troubles. Renzi and his allies are ignoring the biggest problem in Italy’s elections: the award of a massive number of extra seats to the coalition with a plurality of votes. The proposal stipulates that a coalition receiving this award must have at least 37% of the vote, but that threshold still allows for vote distortion in favor of the party receiving the award of up to 20%. Whether this requirement would be deemed constitutional by Italy’s top court is unclear – it struck down a similar provision in the current law in January.

The proposed reforms are far from universally supported. Grillo’s Five-Star Movement, which received more than 25% of the vote in the last election, has come out against the winner’s bonus in favor of a more conventional proportional representation system. The party has played a limited role in the Chamber despite its strong electoral showing, due to its lack of membership in a coalition and its disproportionately low representation as a result of the winner’s bonus.

Renzi’s vision of a fundamentally bipolar system is inconsistent with the nature of Italy’s highly fragmented electorate, and such a system would not necessarily guarantee stability in Italian politics. In reality, smaller parties already play a marginal role in Italian politics. In the 2013 general election, besides the Five-Star Movement, no individual party that did not belong to a coalition received more than 2.25% of the vote, far from the 4% needed for representation under the current system. Increasing this threshold to 8% would do little but further pressure fledgling parties to join coalitions to improve their chances at gaining parliamentary representation.

A better reform plan would be to actually increase the proportionality of the system, as Grillo suggests, in conjunction with institutional changes to the role of the Senate. If the 55% seat guarantee were eliminated and current threshold of election maintained, the unstable power split between the Senate and the Chamber could still be avoided in two ways. First, the power of the Senate could be diminished to the extent that a majority in both Chambers was no longer necessary to form a strong government. Alternatively, the electoral system of the Senate could be altered such that it uses a nationwide list like the Chamber, eliminating the possibility of a split outcome – though that might defeat the purpose of having an upper house at all. Either way, it is eminently possible to devise a system that is both functional and fairly represents the Italian electorate.

Italy adopted its current electoral law in 2005, which increased the prominence of large coalitions without significantly increasing stability or changing the political culture. Some critics argue that removing the plurality winner seat bonus would send Italy back into the chaos it faced in the 1990s, when small, regional parties proliferated and brought the government to a standstill. But creating a more representative system, like the Five-Star Movement proposes, could improve voter confidence in Italian elections and reduce strategic voting.

There is a limit to how much either Renzi’s or Grillo’s proposed electoral reforms can affect Italian politics. Economic instability, a fragmented electorate, and regionalism all contribute to Italy’s persistent volatility in ways that elections have little effect on. This is not to say that Italy is doomed to a future of political instability: future changes in the political system, like the elimination of the Senate, could create new opportunities for substantial reform. FairVote will continue to monitor and evaluate the situation for potential improvements of Italy's democracy.

For international observers looking to avoid Italy’s mistakes, it is important to note that proportional representation is not the problem in Italy. Instead, problematic implementation and a host of other issues unrelated to the electoral system have led to Italian instability. See our Monopoly Politics 2014 report for details on how fair representation voting could be applied to American democracy in a way that improves the functioning of our own broken government. Our proposals for Congress are based on voting directly for candidates, with a high threshold necessary to win, in a combination that we think works particularly well with the United States’ unique political system and culture.