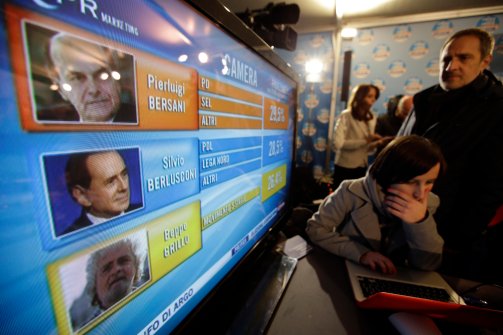 In the aftermath of Italy's general election on February 25-26, outgoing Prime Minister Mario Monti asserted that "no country has such a bad electoral law as Italy." That may be an exaggeration, but there was plenty to be dissatisfied with in the election results. When the electoral dust settles, the Italian system will have accomplished neither of its two goals: fair representation or stable and effective governance.

Even though one coalition, led by Pier Luigi Bersani, received a vastly disproportionate number of seats in the Chamber of Deputies, there is no obvious possible coalition for a majority to control both the Chamber and the Senate. In a governmental system that requires the support of both houses, that means that a government might not be formed and new elections will be necessary.

Electoral systems can't take all the blame for Italy's political dysfunction, of course. Italian politics have been fragmented since the rise of Italian city-states in the 11th century, and the nation was unable to escape that fragmentation following World War II. Italy's political troubles have persisted through a variety of electoral systems, including a fully proportional open list system, a mostly winner-take-all (with a few compensatory PR seats) system enacted in 1993, and finally the current system concocted by then-Prime Minister Silvio Berlusconi in 2005.

That said, let's give the current system some blame. First, here's how it works: in the Chamber of Deputies, whichever pre-election coalition wins the most votes nationwide will receive 55% of the seats (or a proportional number of seats in the unlikely scenario that any coalition wins more than 55% of the vote). Seats are divided proportionally among parties within the coalition, and parties outside the coalition receive proportional shares of the remaining 45% of seats. The system is identical in the Senate, except seats are apportioned by region, instead of nationwide - that is, the coalition that wins the most votes in each region will receive 55% of that region's seats.

These are the election results that the system produced:

Bersani's coalition won a very slight plurality of the vote with less than a third of all votes in both houses. But because of Italy's winner-take-all law, Bersani's center-left parties will receive a majority of seats in the Chamber. The Chamber's electoral system is effectively a plurality system for parties, with all the problems that implies: potential vote-splitting issues, which likely occurred in this election, and vote-to-seat distortion - in this case, an enormous distortion of over 20%.

All that wouldn't be so bad if it at least guaranteed that a majority government could be formed. But because the Senate gives its majority bonus by region instead of nationally, it is entirely possible that a party could win the most Senate votes nationwide but not win a majority of seats. Bersani again won a slight plurality of votes, but wound up with only a slight plurality of seats due to Berlusconi victories in several regions. With comedian Beppe Grillo's anti-establishment 5 Star Movement adamantly refusing to join a coalition with either the right or the left, forming a majority government in the Senate may be impossible.

Bersani's coalition may form a minority government, and as Grillo has stated that his party would "vote those laws that reflect its program, regardless of who presents them," it is possible that such a government could pass some legislation. The 5 Star Movement has had some success with voting on a case-by-case basis in Sicily, where it has controlled the largest share of seats since regional elections last October. Grillo's quick rise shows the value of the degree of proportionality that does exist in Italy, as voters had the ability to express their dissatisfaction with the major parties via the ballot box.

Even if a minority government is formed, though, it seems that the most likely outcome is new elections in the coming months.

Berlusconi has defended his electoral system by claiming that it would bring "bipolarity" to Italian politics. It has not been able to overcome Italy's fractured political culture, however, and the system has shown itself to be dysfunctional in a multi-party situation. It does not accurately represent the Italian people or reliably create stable governments, and it can give voters some very weird strategic voting incentives.

Nonetheless, given the challenges inherent in Italian politics, devising a superior electoral system to the current one will not be easy. The best option for Italy is likely a more purely proportional system with a relatively high threshold for parties to be seated in Parliament. Though it might seem counter-intuitive that Italy could become more governable by making it more difficult for one party to win a majority of seats, the greater flexibility of parties to create post-election coalitions could make stable governments easier to form.

One final note: it is worth stressing (as FairVote has in the past) that the failure of Italy's electoral system in this election should not be used as an argument against proportional representation in general or against the use of fair voting in the U.S. Italy's unique political culture makes it impossible to assume that a given electoral system used there would have similar effects used anywhere else. More importantly, as Professor Matthew Shugart has argued, Italy's electoral system cannot actually be classified as a form of proportional representation due to the huge bonus given to the party with the most votes.

Italy, like Israel, has long been used as a punching bag by opponents of proportional representation. But proportional representation comes in many varieties, and what works and what does not cannot be taken out of the context of the nation holding the elections. This week's messy election exposes the many problems with Italy's current voting system, but there is no basis for claims that the United States would experience similar problems if it were to use superior forms of fair voting, such as the moderate, candidate-based alternatives presented in FairVote's Fair Voting 2012 report.