Is “No” the Status Quo? The Scottish Vote on Independence

700 years after the Battle of Bannockburn, in which the Scots landed a major victory against the larger and better equipped English army, the Scottish people may once again send a blow to the English. This battle will be fought with nary a mace or sword in sight. Rather, the fight will occur in the privacy of voting booths as residents of Scotland decide on whether or not to break away from the United Kingdom this Thursday (18 September). Voters will include English and European Union nationals as well as 16 and 17 year olds, a group that is shaping up to be pivotal to the outcome. 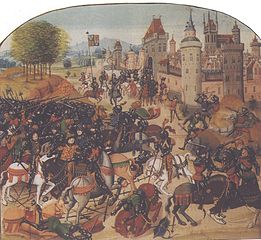 I want to start with the words that I have always wanted either to say or to hear someone else say - The Scottish Parliament, which adjourned on March 25, 1707, is hereby reconvened.

-- Winnie Ewing, opening the first session of the Scottish Parliament, 12 May 1999.

While much of the “Yes” campaign has been emotionally driven, the appeal of independence in not merely wrought from a love for William Wallace’s rebellion or visceral nationalism. Instead, the Scottish Nationalist Party (SNP) draws on simmering resentment over British taxation policies, which stem back at least as far as Margaret Thatcher’s unpopular Poll Tax in 1988, by claiming economic injustice. The SNP website asserts that Scotland contributes more to the British coffers than it receives in government services and that Scotland is more financially solvent.

The main arguments for a “No” vote on independence relate to the uncertainty and potential economic downturn that independence might cause. While the SNP wishes to keep the British sterling as its currency, the Governor of the Bank of England has discouraged such an arrangement. As an independent state, Scotland needs its own membership with the European Union, which has not yet been processed, to conduct normal trade and diplomatic relations with its neighbors. Lastly, while Her Majesty the Queen has professed neutrality over the issue as a whole, much doubt exists about what the military relationship will be between Westminster – the executive government – and its brethren to the north.

The SNP has been quite successful in encouraging Scottish voters to disregard these sizeable qualms in the last few weeks of the campaign. A YouGov.co.uk survey had the “No” campaign leading by 22 points on August 7th. This lead has progressively dwindled. In early September, YouGov’s survey showed the “Yes” camp gained a 2% lead – within the margin of error – over the “no” campaign. Similar, a survey by Panelbase.net find the “Yes” and “No” camps statistically tied at 51% to 49%.

Polls are neck and neck; but the momentum is clearly all on the side of Scottish independence, and the English know it. Prime Minister David Cameron has vigorously campaigned in Scotland, urging Scottish voters to vote “No” on independence. The Prime Minister has offered further devolution of power, including systematic tax power reform. His proposals are supported by the Labour Party and the Liberal Democratic Party. The current Leader of the Opposition, Ed Miliband, went as far as to ask Labour Party councils to fly the Scottish flag in a symbol of solidarity. Celebrities have weighed in. Paul McCartney was one of many prominent figures to sign a letter urging Scotland to remain part of Britain. The original James Bond, Sean Connery, sided with independence.

The Importance of Youth

Whether or not Scottish voters endorse independence, the referendum demonstrates the potential advantages of lowering the voting age to 16 years. To date, only four countries in the world have expanded the franchise to this age. For the Scottish Referendum, the age requirement for voting was reduced from eighteen to sixteen years. Sixteen and seventeen year-olds have taken up this new opportunity to participate in electoral politics, with 81% of those newly enfranchised 16 and 17 year-olds registering to vote. The views of these 124,000 young people may be decisive too, with younger voters more likely to support independence than older voters.

FairVote contacted the Scottish Elections and Constitution Division and were informed that, if the “Yes” vote triumphs, the Scottish Government intends to lower the voting age to 16 for elections of the newly independent Scottish Parliament.

FairVote currently supports measures to expand suffrage to younger voters in American municipal elections. Sixteen is an important age in American society: 16 years olds can drive, work and pay taxes. They are also taking civics classes in school and have close ties to the communities in which they live. Evidence indicates that a minimum voting age of 16 would foster political mobilization in young people and that voting is habit forming: citizens are more likely to vote over the course of their lives if they are brought in to the political arena earlier. In Takoma Park, MD, where FairVote is located, the voting age for local elections has been lowered to 16. In 2013, voter turnout of 16 and 17 year-olds in Takoma Park was double that of older voters. Similarly, a Danish study showed that 18 year-olds in Denmark are much more likely to cast their first vote than 19 year-olds, showing that a later start in politics may stifle political engagement.

While FairVote has no position on the referendum, we are avidly watching the campaign and the role of sixteen and seventeen year-old voters in it.