IRV and Choice Voting on Election Day 2009: Wins, Losses and the Long-Term Trajectory 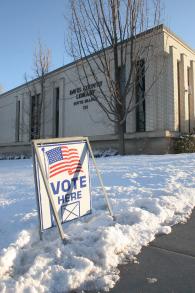 November 3rd highlighted controversies about multi-candidate races and non-majority winners in key races for governor in New Jersey and U.S. House in New York, drawing high-profile attention to instant runoff voting (IRV) as a solution, including in a widely-published oped by FairVote board member John B. Anderson and my comments on The Hill's "Big Question". The elections also brought direct advances for IRV, although with disappointments as well.

On the upside, St. Paul (MN) became the latest city to adopt instant runoff voting (IRV) in an effort backed by a remarkable coalition of former city mayors, U.S. Senators, state legislators and good government leaders. The breadth and depth of support for ranked voting in Minnesota is truly impressive - hats off in particular to FairVote Minnesota, which has been the catalyst for this progress and led the St. Paul ballot drive. Statewide success in Minnesota is within reach, as the state is experiencing an emerging multi-party reality that is a poor fit with a plurality voting system built for only two choices. While some respond to new parties with a fearful approach founded on exclusion and efforts to suppress voter choice, others embrace inclusion and focus on ways to accommodate that increased choice. The inclusion side is winning in Minnesota.

State reformers' efforts are sure to be strengthened by the great reviews coming in for Minneapolis' first election with IRV, also held on Tuesday. IRV was used to elect the mayor, 13 city council seats and a handful of additional seats. Choice voting, the proportional voting form of ranked voting, was used to elect three citywide seats on the park board - marking the first new choice voting election in the United States in decades. Although strong candidates won most IRV races on the first round, big candidate fields gave voters far more choice than ever before in general elections in the city, taxpayers saved money and voter response to the new system was overwhelming positive, as indicated here, here and here.

Cambridge (MA) used choice voting once again for its city council and school board elections, resulting in its most diverse elected officials ever, including the first-ever Asian American to serve on council. IRV also was used in largely non-eventful elections for citywide office in San Francisco (CA), Hendersonville (NC) and my hometown of Takoma Park (MD).

The trajectory of reform is rarely linear, however, and local conditions can change from boosting reform to undercutting it. In Pierce County (WA), voters adopted IRV in 2006 after its recommendation by a charter commission. They voted to keep it on schedule in 2007 and then used it in 2008, with Pat McCarthy becoming Washington State's first-ever woman county executive despite being outspent more than three to one by her strongest opponent in in a highly competitive four-candidate race. Although the Pierce County League of Women Voters and both daily newspapers backed IRV's retention this fall, voters repealed it. IRV advocates' news release explains the situation well. As FairVote's board chair Krist Novoselic commented, the repeal was likely "inevitable once the Supreme Court ruling in 2008 restored Washington's top-two system for our state and federal races. From that moment, Pierce County voters were paying extra for two different partisan systems designed to uphold the same goals of majority rule and voter choice. Something had to give."

Ironically, Pierce County's IRV election for auditor this year was a clear example of its value. As pointed out by Citizens for a Better Ballot campaign manager Erik Connell, "Rather than pay for a countywide election in August to eliminate one minor candidate and give the two frontrunners a chance to double their contributions from big donors, we were able to hold a single RCV race in November with three candidates. 99.9% of voters in the race cast valid ballots, and far fewer voters skipped the race than the port commissioner races. RCV was needed, with winner Julie Anderson earning a majority of the vote in the second round of counting. Once RCV can be implemented simply and inexpensively and gains that much more traction elsewhere, I suspect county voters will take another look."

IRV also may face a binding repeal vote next year in Aspen (CO) after what for now is a narrow loss by six votes in an advisory referendum -- more votes are still to be counted. The result was tied to several factors. The city's highly competitive IRV election in May brought more voters to the polls than ever before, but the novel "two-seat IRV" system for council was very close and frustrated some backers of losing candidates. In addition, a losing mayoral candidate who had raised the most money in Aspen city history prefers a traditional runoff and has worked hard against IRV. While The Aspen Times supported IRV's retention, its editorial appeared after many people had voted in an all-mail election. Still, IRV will only be repealed if defeated in a separate vote in the future.

Ranked voting also suffered a loss in Lowell (MA), where an inspiring grassroots campaign had placed the choice voting form of proportional voting on the ballot by petition. A completely unknown idea to most city voters just a few weeks ago, choice voting earned 43% of the vote despite opposition from the local media. Choice voting gained key allies, some of whom earned seats on the city council, and I suspect it will continue to be considered in Lowell and other cities in the state in the coming years.

FairVote and its partner organization FairVote Action did what we could to help these efforts, both by mobilizing resources and providing staff support - Amy Ngai worked with local leaders to boost the Lowell measure this past month, and former FairVote democracy fellow Erik Connell managed the IRV retention campaign in Pierce County. Thanks for their hard work and for the literally hundreds of volunteers in these reform efforts.

Onward! The arc of the universe bends toward justice -- and toward a more flourishing, participatory, choice-filled representative democracy.