Iowa quite justifiably has earned much praise for its redistricting process, a largely independent one driven by criteria that doesn’t include protection of incumbents or partisan gain. Nevertheless, a review of its elections and this year’s debate about redistricting still highlight the value of forms of proportional voting in a “super district” that puts voters in control of their representation rather than those drawing winner-take-all election lines, however independently those lines may be drawn.

This year the non-partisan Legislative Services Agency (LSA) of the state of Iowa proposed new draft state legislative and congressional district maps on March 31. Without using any political data, but instead relying on clear criteria such as keeping county lines intact, the LSA draws both congressional and state legislative plans. The legislature may then accept or reject the plan once it is presented, without amendment.

As has typically been true in Iowa since this new proposal was first implemented three decades ago, the legislature approved the proposals and they were signed into law on April 19. The proposed congressional map puts two Republican incumbents in the same districts and two Democrats in another district, leaving one district without an incumbent. Iowa is going from five congressional districts to four, given the state’s relatively slow population growth in the past decade. Here’s how the new district map would look, compared to the previous one. 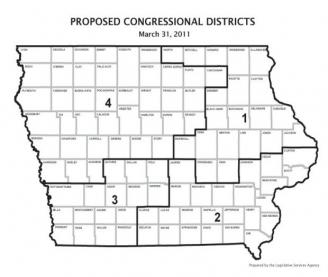 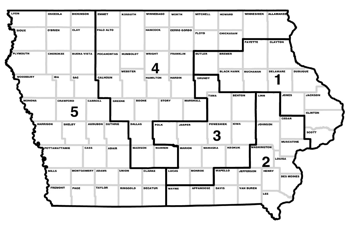 Underscoring the value of Iowa’s nonpartisan process, public officials have largely hailed the plan despite its impact on four incumbents. Senate President Jack Kibbie called it an “amazing plan”, because it carves up Iowa into four congressional districts with a population variance of only 84 people per district while still keeping most county lines intact in one congressional district. House State Government Committee Chairman Peter Cownie, R-Des Moines, also praised the plan, saying “there is no better system.”

Iowa’s congressional incumbents of course were less pleased. Shrinking the number of districts puts Republican representatives Steve King and Tom Latham into the same district – one where King is seen to have an advantage. It also tosses Democratic representatives Bruce Braley and Dave Loebsack in the same northeastern Iowa district.

Democratic member Christie Vilsack has an open district to run in, and if elected, Vilsack would be the first woman to represent Iowa in Congress – unprecedented since Iowa in fact is the largest of three states that have never elected a women or racial minority to the US House.

For all the fairness in the Iowa process, however, there are bound to be winners and losers on both sides and voters deprived of a chance to elect a candidate of choice – inevitable considering the flaws of winner-take-all elections. As a result of the new maps, Democratic incumbent for Iowa’s third congressional district Leonard Boswell and Republican incumbent Thomas Latham in the fourth district start off at a disadvantage against incumbents of their party who are better known amongst most of their new district’s voters. Some suggest Latham may in fact move to another part of the state to run against Steve King.

Statewide, Iowa is closely divided between the major parties in its partisanship, with a 51.1% to 48.9% federal partisan division leaning toward Democrats based on FairVote’s analysis of the 2008 presidential elections. Regionally, Iowa has a general partisan bias toward Democrats in the east and Republicans in the west, with a closer balance in the center of the state. That means voters of the minority party in their area are not well-positioned to win. Here is the partisan voting index of the state’s current districts, as reported by political analyst Charlie Cook:

Here is the projected partisanship of the new districts, based on data from the Swing State Project:

In other words, the proposed plan has two Democratic-leaning districts and two slightly Republican-leaning districts. All are within range of the other party, but, particularly with incumbents of the same party, are ones that may well maintain Iowa’s 2-2 split. And once they settle into their new districts, they may be very hard to dislodge.

Even though Iowa is quite balanced in its partisan division across much of the state, Iowa’s incumbency rate in fact has been more than 97% since the first use of independent redistricting three decades ago. Even if independent commissions are a laudable reform to draw up redistricting plans, they are not the panacea to our country’s democratic deficit – as evidenced through competitiveness, racial fairness, and geographical coherence.

The overarching factor in this problem is the winner-take-all, single-member district configuration in place. As a result, most incumbents are elected by default because their party is the preferred one in any given district. While Iowa’s redistricting plan is not without value, it still does not address the root causes of incumbency advantage and competitiveness, which is our nation’s electoral system.

That’s why FairVote suggests that we move to modest systems of proportional voting in “super districts.” If Iowa were to be transformed into a single four-seat super district elected with a fair voting system, the effects of redistricting would be eliminated because scattered support can elect a representative if votes are concentrated into a single candidate. The state as a whole would simply elect four representatives. Also, population shifts wouldn't distort representation because all votes would be equal no matter where the voter lives within the state. For example, a voter who lives in the southeast portion of the state could vote for a candidate in the northwest  portion of the state.

Every vote should matter, however, and with a system like choice voting, votes for minor parties aren't automatically thrown out. This is because a four-seat super district system would enable any group with just over 20% support (passing the threshold of exclusion) to elect a like-minded representative (as compared to 50%+1 in a single-member system) -- and have their ballot count for ther second choice if their candidate trails too far behind to reach that winning threshold.

Under such a system, both major parties would likely each elect two representatives, but minor parties, independents and the other major party could hold them accountable in every election. This would encourage every voter to turnout and exercise their right to suffrage. As Iowa’s population continues to evolve, groups of voters wouldn't lose power relative to other parts of the state, unlike with the current one-seat district system. And women candidates would have a better chance to break into representation.

With a four-seat super district, election outcomes would be more representative of real grassroots opinion, every vote would matter, representatives would have more incentives to work together across party lines, and most voters would have a representative between election with whom they agree on most issues. It's much more democratic.