Independent Commissions Win in Court - But What's Next? 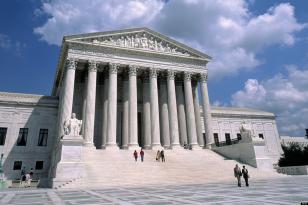 This morning the U.S. Supreme Court rejected an assault on the power of the people to institute an independent redistricting commission to draw congressional districts. The decision is plainly right, and these commissions serve an important role. As Michael Li of the Brennan Center said, the decision reaffirms "the principle that voters have the freedom under the Constitution to experiment with ways to make their democracy work better."

However, rather than getting too caught up in celebrating, we must continue to take action to make congressional elections competitive and fair. We need Congress to replace its requirement that states must elect its Members of Congress from winner-take-all districts with a requirement that the people choose their own representatives - more than one at a time, with ranked choice voting.

In the first paragraph, the Court reaffirms its position that partisan gerrymandering is "incompatible with democratic principles." Using the voices of leaders from the founding era, the Court raised the importance of legislation being controlled by the people. “The genius of republican liberty,” wrote James Madison, “seems to demand… not only that all power should be derived from the people, but that those intrusted with it should be kept in dependence on the people.” The Court also referenced the critical passage from the Declaration of Independence reading, "governments are instituted among Men, deriving their just powers from the consent of the governed."

Gerrymandering undeniably severs that critical link between the people and their government, by deciding in advance who will be elected and then drawing districts around the voters those pre-ordained winners would prefer. What the Court did not directly acknowledge, however, is the simple fact that districting itself is gerrymandering. Whoever it is that draws district lines decides who will win election well in advance of any votes being cast. It is a top-down system for electing a legislature.

In April, I made this point when talking to a group of journalists, scholars, and reformers at FairVote's Democracy Slam 2015. I also presented the solution in the form of a paper: ranked choice voting in multi-winner districts. With multi-winner ranked choice voting, voters truly choose their representatives, rather than the other way around. That is because when the election will select three, four or five Members, rather than just one, the election is not zero-sum. Instead of one group winning and all others losing, every significant group of voters can elect a representative that will reflect their voices. That solution was the highest rated by the group of judges in terms of impact, while independent redistricting came in third.

This is undoubtedly positive, but note that with ranked choice voting, the number of seats won is likely to be fairly proportional to the statewide vote total: if 60% of voters favor Democrats, Democrats should win about 60% of seats, not just the same safe seats they always win plus a few competitive seats. Add to that the fact that RCV creates space for independent and third party candidates to hold the major parties accountable, and you can see that the difference is quite dramatic. In order to get a better sense of just how much impact various reforms would have on important democratic values, FairVote has been engaging in a deeper process of analysis with political scientists and law professors, and so far it is confirming the significantly greater impact of multi-winner RCV compared to independent redistrict alone.

Even though there is no more doubt that independent redistricting commissions are legal, reformers should still demand a solution from Congress. First, the states most in need of democratic reform are also the least likely to adopt it. For example, in states like Louisiana, Mississippi, Alabama, Georgia, and both Carolinas, district maps systematically undercut fair representation and voting rights, yet none of those states has an initiative process, and so election rules remain in the hands of those benefiting. Second, independent redistricting alone does not actually undo that systemic bias. In February, 2014, FairVote asked a consultant to draw district maps for states in the Deep South based on no partisan considerations whatever, and none of them performed as well as ranked choice voting in multi-winner districts; some were worse than the current maps in terms of fair representation.

Problems with representation in states like these have tremendous national significance. Only two days after the 2014 congressional elections, FairVote released its final projections for the 2016 congressional elections in 373 seats (85% of contests). In other words, we already know that 212 seats can be called for Republicans and 160 seats can be called for Democrats, without needing to know anything about the candidate campaigns (assuming the absence of something like a severe scandal). We have projected such results in prior election years with 99.7% accuracy.

In other words, in the rush to celebrate this ruling, there has been an unfortunate overstatement of its impact. The blunt reality is that partisan gerrymandering is not the reason that most districts are not competitive and not the reason that Congress has such a poor connection between voter preference and who is actually elected. Voices loudly proclaiming that "The Supreme Court Gave Democrats a Fighting Chance to Win Back the House" are misguided: this case simply will not result in a significant change in election results, neither in 2016 nor in 2022.

Today's opinion confirms that Congress has the power to require fair representation. It describes that power as “the dominant purpose of the Elections Clause," quoting voices from the founding era calling the Elections Clause "a way to ensure to the people their rights of election."

In 1967, Congress passed a law requiring every state to divide into districts. As we approach the next round of redistricting in 2021, we will be building support in an outside of Congress for a new law. Under our proposal, Congress would take away the power to gerrymander once and for all and ensure that voters in all states can choose their own representatives, rather than the other way around. With ranked choice voting in multi-winner elections, we will live up to our ideal that government must be by the consent of the governed.