Student leaders decided to take action after a runoff election last May brought only 7 percent of voters to the polls. “Run-off elections have always been an issue,” said Elections Commissioner Elijah Poppers. In addition to reducing turnout and reportedly confusing voters, many candidates claimed that the two-round runoff also placed a heavy burden on campaigning. 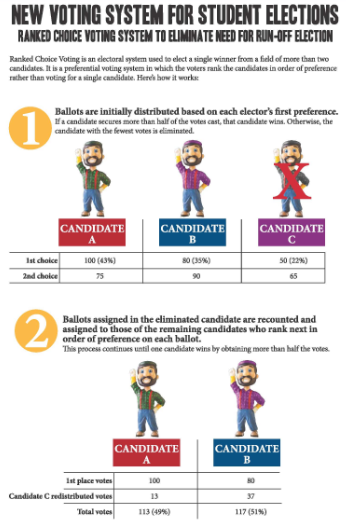 According to Jennie Rose Saunders, who ran as a vice-presidential candidate, “Most would agree the runoff was kind of a waste of time.”

Last week’s elections were the first test of the new system for Humboldt. In an effort to prepare students, the Associated Students created a voter guide (right) and Humboldt NOW published a blog explaining ranked choice voting to the student body.

Thanks to effective outreach and an engaged student body, “the elections went really smoothly,” said Poppers.

Humboldt is the newest addition to a growing list of schools that are turning to ranked choice voting. From MIT to Oregon State, students all over the country are ranking candidates to eliminate costly runoffs, boost turnout, and ensure their campus leaders are elected with broad bases of support. Ranked choice voting is used at over 50 universities and college in the US, accounting for over 700,000 students.

Many schools have adopted ranked choice voting to boost voter turnout, and are seeing encouraging results. In the same week that Humboldt held its elections, Oregon State University saw voter turnout rates skyrocket in its first election since adopting ranked choice voting last fall. Macalester University also implemented it for the first time last year, reaching historic turnout rates of over 55% in its most recent election.

By adopting ranked choice voting, Humboldt builds on a proud tradition of civic engagement and thinking ahead of the curve. With universities of all sizes and specialties doing the same throughout the country, it’s clear that ranked choice voting is a smart and practical solution for a new generation of voters.