This post was update on January 5, 2013 using the final 2012 popular vote numbers provided by states in their certificates of ascertainment.

One commonly cited benefit of the Electoral College is that, even when the national popular vote for president is close, it creates a decisive victory for one candidate or the other, giving the winner more legitimacy. However, these "decisive" victories are often more tenuous than they seem. There are plenty of elections in which slight vote shifts in key states would have changed the winner of the Electoral College vote, despite the original winners' significantly larger leads in the nationwide vote.

Our most recent example is the election of 2012. Based on states' final vote tallies on their Certificates of Ascertainment, it seems that Mitt Romney's "magic number", or the number of votes that he would have needed to shift from Barack Obama to him in order to change the outcome of the election, was 214,735 votes, despite Barack Obama's lead of almost 5 million votes nationwide. A shift of 37,155 votes in Florida, 83,108 in Ohio, 74,650 in Virginia, and 19,822 in New Hampshire would have tipped the Electoral College to Romney, making him our second "wrong winner" president in twelve years.

However, the number of votes needed to shift the outcome of the 2012 election is large compared to the shifts needed in several other elections over the past century. Some of the more prominent ones are discussed below. 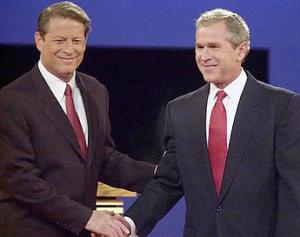 In this notoriously close and controversial election, Florida's official final vote margin was 537 votes in favor of George W. Bush. That means a shift of only 269 votes in Florida from Bush to Al Gore would have given Gore Florida's 25 electoral votes, leaving him with a total of 291, which was more than enough to win the Electoral College and the presidency. Comparatively, a shift of a little more than a quarter of a million votes would have been needed to make Bush the winner of the national popular vote. This election was the closest electoral vote count since the election of 1876, in which national popular vote winner Samuel Tilden lost the presidency to Rutherford B. Hayes by one electoral vote. 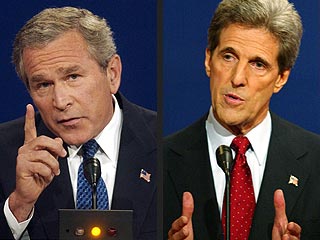 Although George W. Bush's second election was quite close by Electoral College standards (286 to 251), his margin in the nationwide vote was actually quite large (3,012,171). However, a shift of only 59,301 votes from Bush to John Kerry in Ohio, the most competitive state in the 2004 election, would have given Kerry the presidency, despite the fact that in that case, Bush would have still led Kerry nationally by about 3 million votes.

In a second scenario, a shift of a mere 21,822 votes in the swing states of Iowa, New Mexico, and Nevada would have sent the vote for the presidency to the House of Representatives, in which each state would have had one vote in deciding who would become the next president. However, Republicans controlled a majority of states' delegations in the 107th Congress, meaning that Bush, the winner of the national popular vote, probably would have still become president. 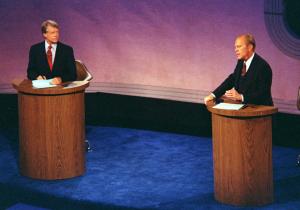 Despite Jimmy Carter's nationwide lead of 1,682,970 votes over Gerald Ford, a small shift of a total of  9,246 votes in Hawaii and Ohio would have given Ford the 29 electoral votes he needed to win a second term. In this scenario, Ford, who is the only person to have become both Vice President and President without being elected for either position by the Electoral College, would have been the first president in 100 years to win the Electoral College but lose the national popular vote. 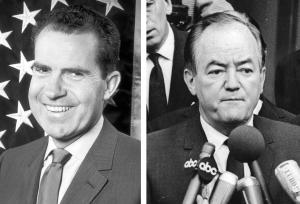 In the 1968 election, Richard Nixon defeated Hubert Humphrey 301-191 in the Electoral College, a large margin considering that Nixon attracted only half a million more votes than Humphrey of the 73 million cast nationwide. Despite Nixon's large margin of victory in the Electoral College, a shift of 32 electoral votes from Nixon to Humphrey would have prevented any of the candidates from receiving an Electoral College majority, sending the decision of who would become the next president to the House of Representatives, where Democrats controlled the majority of states' delegations.

The states controlling the 32 votes needed to prevent this wrong winner scenario were Missouri and Illinois, where a shift of 77,724 votes combined could have denied Nixon his victory. The reason that this vote shift would have prevented either candidate from collecting a majority of Electoral College votes without resulting in a tie is that George Wallace of Alabama had won 46 votes in the South. For either candidate to win the presidency, he needed to win more electoral votes than both of his opponents combined.

If Wallace had held the balance of power, there was speculation that he would have sought to negotiate with Nixon and Humphrey, convincing his electors to vote for the candidate who succumbed to his demands. Just as Ruther Ford B. Hayes' deal with the Democrats after the 1876 election hastened the end of Reconstruction, Wallace could have sought to maintain Jim Crow laws in the South in exchange for the White House. 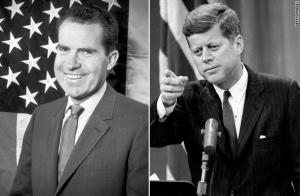 The 1960 election boasts one of the closest national popular votes in American history, with John F. Kennedy narrowly beating Richard Nixon by 114,673. However, a shift of 9,216 votes in Illinois and South Carolina would have denied either candidate a majority in the Electoral College (the 15 electors from Mississippi and Alabama were unpledged), thereby sending the election to the House of Representatives. 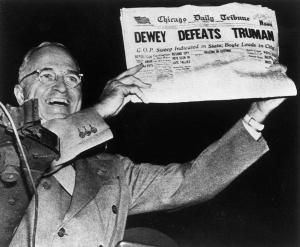 An iconic photograph from the 1948 shows a victorious Truman holding up a copy of the November 3rd Chicago Tribune whose headline read "Dewey Defeats Truman". With a shift of only 12,487 votes in Ohio and California from Truman to Dewey, that headline could have been correct. With those shifts, despite Truman's 2,135,570 lead in the nationwide vote, he would have fallen short of a majority in the Electoral College, sending the election of the president to the House of Representatives.

This would have led to political turmoil, as control of the House had shifted during the 1948 election from the hands to the Republicans to the Democrats, as did control of the majority of state delegations. In addition to this struggle between the old and new House delegation, Strom Thurmond, a regional candidate like George Wallace, might have sought to broker a deal in favor of the Southern segregationist policies he favored in exchange for his 39 electoral votes. 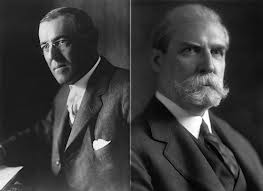 In 1916, Charles Evans Hughes lost the popular votes to Woodrow Wilson by over half a million votes (at the time representing 3% of the national popular vote), but could have defeated him in the Electoral College with a shift of 1,888 votes in California. However, in this scenario, a flip of a mere 185 votes in Minnesota from Hughes to Wilson would have given the presidency right back to Wilson.

As we can see, while Electoral College margins may seem significant in elections with close national popular votes, with shifts of a few thousand votes from one candidate to another, America may have been left with "wrong way winners" like President Hughes, President Kerry, or President Humphrey. Wrong winner elections undermine our democratic ideal that the person who receives the most votes for an office should ascend to that office. Surely, it would be preferable to let a margin of half a million voters nationwide decide the outcome of our elections, rather than a few thousand voters in a select few states - especially when that means voters in all states would participate in electing their president on an equal basis. Under the National Popular Vote interstate compact, threats of wrong winner elections would cease to exist, and the candidate preferred by voters nationwide would always become president.