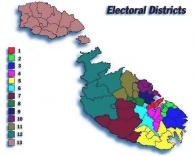 As I detailed on this blog last week, Malta recently held a general election using choice voting, a fair voting system with a long history of use in the United States. The election had an exceptionally high turnout, as is typical for Malta, and produced a decisive winner.

But the history of choice voting's use in Malta has not been entirely seamless. In December of 1981, Malta faced an electoral crisis after its national elections gave the majority of seats in Parliament to the Labour Party, who had led the previous government, even though the challenger Nationalist Party received the most first choice rankings. Labour successfully formed a government, but the Nationalists walked out of Parliament. Despite the use of choice voting, Malta's electoral system had produced an unaccountable government: one that was not removed from office by a majority voting for change.

Since choice voting is a proportional system, how did this disproportionate outcome happen? In any election in which seats are allocated within geographic districts (single-seat or multi-seat), wrong-winner elections can occur. Seat-to-vote distortions are most common and severe in winner-take-all elections, such as the election for Michigan's House of Representatives last November in which Republicans retained control of the legislature even though Democrats won 54% of the vote.

But wrong-winners can occasionally occur under fair voting systems as well, particularly when districts have a relatively high threshold for election - the 16.7% threshold in Malta, for instance. Furthermore, because of Malta's small legislature size and evenly divided partisanship, even a small amount of distortion can be enough to produce a wrong-winner legislature.

While this issue does not diminish the many other benefits that choice voting has given to Malta's elections, it does merit being addressed. Malta has tried to do so, modifying its choice voting system after 1981 with a series of amendments that add seats to the legislature to ensure that the party with the most first choice rankings receives the most seats. The seat addition system Malta most recently settled on is complex, but this gist of it is that any party that wins seats at a seat-to-vote ratio lower than that of the party with the highest seat-to-vote ratio will be awarded additional seats until that distortion is corrected.

These changes came at a cost, however. Because they evaluate distortions only based on first choice rankings, they removed one of the biggest advantages of choice voting: namely, the elimination of strategic voting by allowing voters to rank their choices sincerely without any worry that their votes will hurt their desired election outcome. In Malta's current system, votes for minor parties that are unlikely to win any district seats do not affect the allocation of compensatory seats, thus diminishing the voting power of voters who choose to break from the two-party structure.

Fortunately, this tradeoff is not necessary. It is possible to implement a choice voting system that guarantees an accountable government without forcing voters to choose between ranking a minor party first and helping their preferred major party get the most seats in the legislature. FairVote calls such a method a "Districts Plus" system.

Here's how it could work in Malta. There are currently 65 district seats in Malta's legislature, with five representatives from each of the island's 13 districts. Districts Plus would add "accountability seats," which would compensate all parties for any distortions caused by the district system. Based on Malta's recent electoral history, it is unlikely that it would be necessary to add more than five seats after any given election.

There would be a moderate minimum threshold for parties to win accountability seats - let's say 4%. Ballots with first choice rankings for candidates of parties that did not surpass that threshold would have their accountability vote count toward the party of the next different-party candidate ranked on the ballot. After all ballots for parties below the threshold had been distributed, distortions between a party's candidates' share of the vote and the party's share of seats would be determined. The accountability seats would then be filled by the losing candidates from the disadvantaged party that had the most votes when they were eliminated from the original count.

In this way, voters would feel free to rank minor parties first but still have their ballot help their preferred major party be elected. The major party with the most first choice rankings would be guaranteed to win the most seats in Parliament. It is a simple fix and a clear improvement over the false choice between accountability and voter choice that Malta has operated under for the past 30 years.

Malta's most significant third party, the Green Party, has already proposed a similar modification to the one described here, in which any party could win nationwide seats if they surpass a low threshold of votes.

Again, it should be stressed that the addition of accountability seats is not necessary for a choice voting system to have a very high degree of proportionality. If the goal is to guarantee accountability, however, Districts Plus is the best way to ensure that voter choice and third parties are not harmed in the process.