How New Mexico Lost Its Swing

One can imagine that is what political operatives, politicians, and voters in New Mexico are thinking this election cycle. During the 2000, 2004, and 2008 presidential elections the state was considered one of the nation's most important presidential battleground states and therefore it received quite a bit of candidate attention. In fact, in 2008, New Mexico was ranked 6th on a per capita basis for the most ad spending (about $3.5 million) and candidate visits (about 8), beating out Iowa and Florida.

Just as we projected in a 2009 analysis, however, the candidates are barely paying any attention to the one-time swing state this time around. Barack Obama has only held one public event in New Mexico this year, a visit to an oil field in late March, and Mitt Romney has held a single rally in the state. Neither campaign has aired an ad there, although some SuperPACs like American Crossroads and Americans for Prosperity did earlier in the year.

So what happened? And what does it tell us about the immense role of the winner-take-all voting rule in determining which states matter to presidential candidates?

From 1984 to 2004, New Mexico had a remarkably consistent, balanced partisanship, meaning that its vote outcome did not deviate much from the national average. A state's partisanship measure projects what the results in a state would be if the national vote were exactly even. For example, if a Democrat won the national popular vote by 55% to 45% over the Republican, a state with that same margin would have a 50% Democratic partisanship. If the Democrat won a state by 51% to 49% that year, the state would have Democratic partisanship of 46%, meaning that it leaned farther Republican than the nation as a whole. States with partisanship scores between 47% and 53%  in one election are usually considered swing states in the next election.

In 2008, however, New Mexico shifted sharply toward the Democrats. Even though Republican candidate John McCain invested heavily in the state - by some measures the third most spending per capita - Democratic candidate Barack Obama won the state by nearly 4% more than his national average, giving it a Democratic partisanship of 53.9%. Without a sharp shift back toward the Republicans, a Republican candidate in 2012 wouldn't win the state without winning the national vote by at least 8%. This makes it highly unlikely that New Mexico will be a 'tipping point' state, or a state that a candidate would need to win in order to become president. Therefore, New Mexico is no longer on the swing state map.

Here's how we explained it in 2009. Our assumption then was that if the Republican nominee - now known to be Mitt Romney - improved the party's national vote share, it would be reflected in changing state outcomes generally in order of partisanship. There were 12 states that McCain lost in 2008 by a smaller margin than he lost in New Mexico. In other words, by the time New Mexico voted Republican, its five electoral votes would give the GOP far more than the magic 270 mark necessary to win the presidency. To build on McCain's electoral vote base, we projected that the Republicans would first target the following states:

As it has turned out in the 2012 campaign, Indiana's partisan shift in 2008 towards the Democrats seems to have been an anomoly, and no one is treating it as a swing state anymore. North Carolina is seen as the swing state that Romney has the best chance to win. Most analysts see the states in third through seventh on our list as the key ones that will determine whether Romney wins. Nevada, New Hampshire and Wisconsin may be in play, but most polls show them to be long shots for Romney. And New Mexico? No one seems to care, relegating it to spectator status along with nearly 80% of states.

New Mexico's experience closely mirrors that of another jilted state: Oregon. In the 2004 election, Oregon, which had been a swing state since 1992, voted heavily for Democrat John Kerry, thereby losing  for the 2008  election all of the attention that its swing status had brought it. While in 2004 Oregon ranked 13th on the list of states to receive the most campaign attention per capita, in 2008, it did not receive a single visit, and only $2,664 in ad money from the candidates' campaigns. 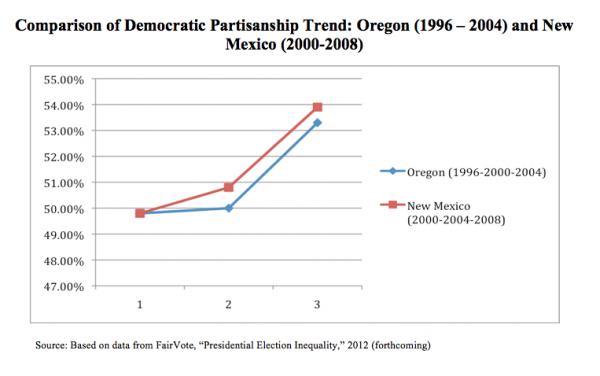 New Mexico isn't alone in dropping from the of swing states in 2008. While some analysts thought that Obama had widened the number of battlegrounds, our post-election analysis was in fact more accurate: the swing state field has decreased. On the other side of the political spectrum, Missouri is now thought to be too far right to be competitive. Even though its vote was the closest in the nation in 2008  (49.36% for McCain and 49.23% for Obama), because Obama is unlikely to do as well nationally in 2012 as he did in 2008, we saw this as evidence that it would not be viewed as a swing state in 2012 - and that has proven true.

As we look toward 2016, we'll have to wait for the final 2012 numbers to know which states, if any, have moved into swing state status. Looking at polls and the percentage predictions of analyst Nate Silver, it's hard to see any state moving into a swing state role for 2016 that wasn't there in 2012. It's also not clear yet which states may become the next to follow New Mexico and Oregon into spectator status. We suspect that Wisconsin, Nevada, Pennsylvania, Michigan, Missouri, Indiana and Minnesota are nearing the edge of the cliff where potential swing states tumble into that political oblivion.

If so, that could mean the same swing states will be the targets for 2016: North Carolina, Florida, Ohio, Virginia, Colorado, Iowa, and New Hampshire. We won't be certain until the 2012 votes are counted, but state officials in prospective spectator states may want to call their counterparts in New Mexico and Oregon to learn just how lonely it can be when the presidential candidates stop calling - and then sign onto the National Popular Vote plan that would put every state in play in 2016.