Hanging by a Thread: Egyptian Democracy After the June 18 Coup 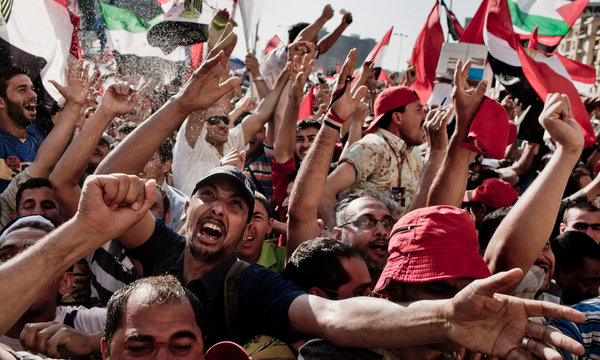 Last week, Muslim Brotherhood candidate Mohammed Morsi became the first democratically elected president of Egypt's post-Mubarak era, defeating his major competitor--Mubarak loyalist Ahmed Shafiq--by a narrow margin of 51.7% to 48.3%, although both sides have challenged the fairness of the tally.

Morsi's hands will be tied despite his holding the presidential title.  On June 18, in the midst of the presidential election, the Supreme Council of the Arab Forces (SCAF) dissolved the democratically elected parliament.  Not coincidentally, Morsi's Muslim Brotherhood allies controlled nearly half the seats in the People's Assembly.

That day, SCAF also assigned itself broader constitutional powers at the expense of the president. For example, the Council can now veto articles drafted for the new constitution.  It can also dissolve elected legislative assemblies and create new ones.

SCAF's string of constitutional addendums--a move that has been labeled a "military coup"--could have dire consequences for Egypt's democratic transition going forward.  Given that SCAF's new legislative powers are supposed to disappear when a new parliament is elected, SCAF has incentives to prevent future parliamentary elections.  In such an event, the president would be a weak check on SCAF's undemocratic inclinations.  Only time will tell, but safeguarding democratic procedures could be an uphill battle in the aftermath of last week's events.

A FairVote blog series has covered the trajectory of the Arab Spring movement from its beginning, with a special focus on the impact of choices about voting rules and their impact in the parliamentary and presidential vote.  At this point, however, the question is whether Egypt will have even a pretense of democratic elections, not how best to hold to them.

FairVote's Rob Richie commented today, "Egypt possibly could have avoided this crisis by adopting a fairer parliamentary election system with all seats elected by proportional representation, along with a fairer presidential election.  It could have established a basic code of human rights that no elected government could have challenged without changing the constitution.  As it is, the democratic movement in Egypt hangs by a thread."