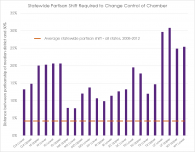 FairVote today released Government of the Few in the “Decided Dozen" -- Frozen Representation and the Distorted Demographics of Decisive Primary Elections. Report authors Andrew Douglas and Zack Avre zero in on the “Decided Dozen”—12 states where control over the state legislature and the outcome of the great majority of general election races is never in doubt, leaving the only meaningful choices and power to voters in low turnout, unrepresentative primary contests.

This “Decided Dozen” consists of Georgia, Idaho, Hawaii, Massachusetts, Missouri, New York (State Assembly only], Rhode Island, South Carolina, Tennessee, Texas, Utah, and Wyoming. Legislative elections in these states share three common elements: a change in majority party control would require enormous and unlikely shifts in voters’ partisan preferences; few individual districts are likely to be competitive; and candidates rarely find ways to win on their opponents’ turf. Furthermore, voters in the dominant parties’ primaries in these states – the only group to which majority legislators owe their power – are highly unrepresentative of their states’ voters more broadly. This is true not only of their partisan ideological views, but also for demographic measures like age and ethnicity.

Government of the Few is the first in a series of reports that are based on two important analytic tools developed by FairVote and to be released in full later this summer:

Together, these tools tell powerful stories about American elections. We begin our series of reports with this analysis because of particularly compelling data that underscores the serious flaws the United States’ current electoral rules – more specifically, winner-take-all, plurality elections that render voters in most state legislative general election contests irrelevant, with little ability to impact the control and composition of state chambers. Those decisions instead are decided in primary elections dominated by participants who are on average far older, whiter and more partisan than the electorate overall.

Here are a few key points from the report, which is chock-full of graphs and visuals.

FairVote’s electoral reform agenda has key components that we believe are essential for addressing these problems:

Modify the “top two" system with ranked choice voting: We see great value in modifying the “top two" system as used in California and Louisiana. The California system allows all voters to choose among candidates of all parties in the primary, with the top two facing off in November. Such rules still give the primary electorate dominant power, as the great majority of races are effectively decided there. But advancing four candidates and handling this increased number of ballot choices with ranked choice voting would open up far more general elections to real competition while creating new incentives for winners to reach out to more voters and be more representative of their district. The Louisiana system eliminates the primary altogether, with a runoff when no candidate wins a majority of the vote; we would modify it with ranked choice voting in the November election to reduce the number of low-turnout December runoffs.

Replace gerrymandered single-winner districts with fair representation: Although the high partisanship of most state legislative districts is primarily a result of the natural distribution of voters, pervasive gerrymandering exaggerates these trends and is indefensible. But to truly address the widespread lack of competition, we need to accept that the real problem is not redistricting, but districting itself. In order to allow more voters to participate in meaningful elections and be represented, we support moving to multi-winner districts with ranked choice voting and other forms of fair representation voting that are already used in many local elections in the United States. Our simulations of such a plan for congressional elections (see fairvoting.us) indicate that nearly every such district would elect representatives of more than one party, and reflect greater diversity within the major parties as well.

The first step to change is admitting the problem. Although we focus on the “Decided Dozen”n this report as emblematic of what is wrong with elections in the United States, these problems extend across all 50 states. Future reports in this series will clarify the sweeping nature of our dysfunctional status quo and make it clear that the “Decided Dozen” might just as easily be summarized as “the Failing Fifty.”