Mitt Romney won 39% of the vote in New Hampshire in the nation's first 2012 primary and received seven of the state's twelve delegates, or a 58% share. An in-depth look into New Hampshire's voting method allows us to see how a disproportionate delegate distribution arises from the proportional system utilized by the New Hampshire Republican Party.

The Rules of the Republican Party Rule 15(b)(2) dictates that contests prior to April 1 must be conducted according to proportional allocation but does not specify by what means. This allows states to differ wildly in their interpretation of "proportional." As written about in FairVote's blog on January 10, New Hampshire's Republican Party chose to allocate its delegates proportionally based on a 10% threshold.

In New Hampshire, presidential primaries must be conducted according to Elections Procedure Section 659:93, requiring a minimum of a 10% threshold. Of the remaining candidates who meet this threshold, the secretary of state proportionally allocates delegates according to a version of the "highest remainder" method, one of several proportional representation formulae.

Under this method, delegates are divided according to the remaining candidates' redistributed vote percentages, with each proportion rounded down to the nearest whole number. Often there are extra delegates remaining due to this rounding procedure. While the classic version of this method allows for unassigned delegates to go to the candidates with the highest remainders, New Hampshire's version awards all remaining delegates to the candidate with the highest number of votes. 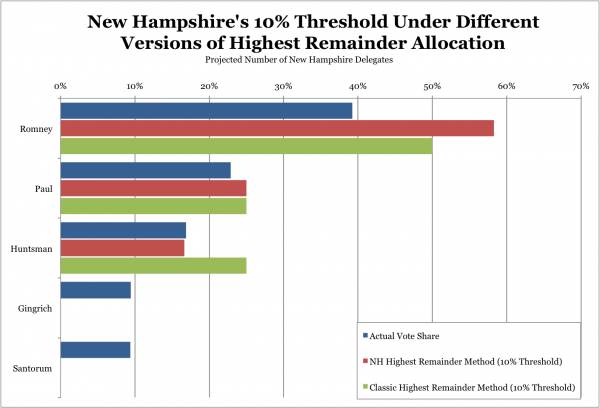 Another unique feature of New Hampshire's allocation is its employment of a 10% threshold - a threshold that both Newt Gingrich and Rick Santorum barely missed achieving, even though their voters consisted of nearly 20% of the total vote. Most nations that use proportional allocation systems for their legislatures use lower thresholds (commonly a 5% threshold). With many competitive candidates in the New Hampshire primary, it should be noted that a slight change in this threshold significantly impacts the distribution of delegates. A 5% threshold, for instance, brings Gingrich and Santorum into the distribution of delegates.

Here's how the primary would have played out using a 5% threshold, compared with New Hampshire's 10% threshold - using the New Hampshire method of awarding all remaining delegates to the candidate with the highest remainder. 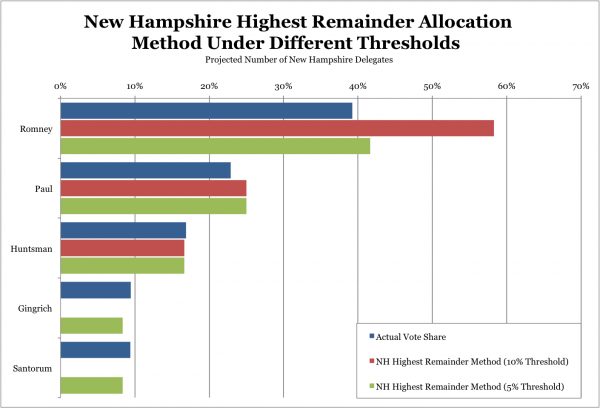 Other notable news from New Hampshire: