Gerrymandering in Michigan and the Super District Remedy

This year's controversies over redistricting in Michigan provide the latest evidence of the failure of winner-take-all, single member district rules. Winner-take-all elections inevitably represent many voters poorly and tempt partisans to gerrymander outcomes. The 1967 law mandating that states use them should be repealed so that states like Michigan can explore “super district” form of proportional voting to increase voter choice and fair outcomes.

Used for many national elections and in a growing number of American cities, proportional voting (sometimes called “proportional representation”) allows like-minded voters to come together to elect representatives in numbers mirroring their level of public support – and thereby puts voters in charge of their representation in every election rather than redistricting mapmakers once a decade.

Here’s the story from Michigan this year. The state is closely divided between Republicans and Democrats, but after a near-sweep of the 2010 elections, Republicans have complete control of redistricting. Last month Republican legislators released their proposed redistricting plan for the next decade of congressional elections and have already passed it for Gov. Snyder’s expected signature.

As inevitable in a state that does not require independent redistricting and rewards winner-take-all calculations, the Republican plan is seen as a partisan gerrymander, although limited by the overall Democratic leanings of the state in federal elections. Democrats hold both of Michigan’s U.S. Senate seats and Barack Obama won the state by 16.5% in 2008. Republicans picked up two House seats in 2010 for an overall 9 -6 edge and now seek to protect their nine incumbent, with an apparent goal of reducing Democrats to five seats as the state loses a seat due to reapportionment.

In the 2010 plan, Democrats had a partisanship advantage (as measured by whether Barack Obama ran ahead of his national average in the 2008 presidential race) in nine of 15 districts, including five by large margins – not surprising in a state where President Obama ran some 9% ahead of his national average, although limited by the concentrated nature of the Democratic vote in the Detroit area.

In the proposed plan, Democrats would have a partisan advantage in only five seats, with Republicans having an edge in seven seats and two seats evenly balanced. The map represents a risk for Republican in seeking to preserve their nine incumbents. In cutting its advantage closely, no district was drawn where the underlying Republican advantage was greater than 55% to 45% even as four districts have Democratic advantages of at least 60% to 40%. By seeking to keep incumbents safe, it also establishes a winner-take-all ceiling for women challengers in a state where women hold only one U.S. House seat.

A Better Way: Putting Voters in Charge with Proportional Voting

So what should Michigan do? Independent redistricting along the lines of the Iowa model would reduce particularly egregious gerrymandering, but inevitably would still determine representation for most voters, as many districts would end up being noncompetitive due to current concentrations of Republicans and Democrats. It also might continue to “overpack” the Democratic vote in its areas of concentration, leading to statewide outcomes not reflecting statewide voter preference.

To make independent redistricting work, we need to replace winner-take-all elections that disadvantage those in the minority with geographically compact “super districts.” In each super district, several representatives would be elected with a proportional voting system like choice voting. Under our proposed plan, Michigan would be divided into four super districts with five seats in Super District 1 (SD1) and three each in SD2, SD3 and SD4. Each district would have the same number of seats per person. (The United States has a long history of multi-seat district elections based on this apportionment principle -- e.g., a Maryland House of Delegates district with three seats has three times the number of people as a House of Delegates district with one seat.)

To create and evaluate our super districts, we were limited to using districts from the 14 congressional districts as approved by the Republican legislature. We used partisan data about  these super districts provided on the Daily Kos blog, using presidential election results from 2008 (We using our variation of the Cook Partisan Voting Index, which was developed in 1997 based on our model that we released earlier that year. We measure the relative performance of the presidential candidates in the district compared to their national average. If Barack Obama ran 5% ahead of his 2008 national average in the super district and John McCain ran 5% below his national average, then the district would have a Democratic partisanship of 55% and a Republican partisanhip of 45%.)

Here is our proposed super district map as compared to the new 14 seat congressional redistricting map passed by the legislature: 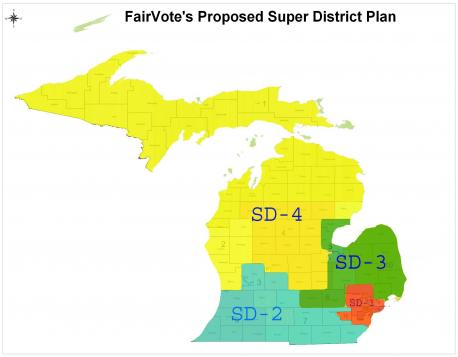 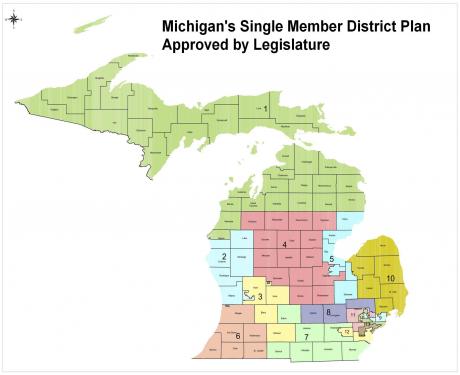 Analysis of Our Super District Plan

Partisan Analysis of Super District Plan: Backers of both major parties would have the power to elect at least one candidate in each our four super districts. Democrats would be favored to earn a 3-2 edge in SD-1, with a chance to earn four seats in a strong Democrat year in which their candidates won two-thirds of the vote in the district. Republicans would be favored to earn a 2-1 edge in SD-4, but would not be guaranteed winning two seats. Absent popular incumbents, the third seat in the remaining districts (SD-2 and SD-3) would also be a toss-up for either party. Minor parties and independents would have a greater chance to win a seat in every district, especially SD-1

Voting Rights Analysis: We don’t have racial data for our proposed plan, but we know that African American voters are relatively concentrated in the Detroit area. African Americans and other racial minorities would not be near the victory threshold in SD-2, SD-3 and SD-4, but their vote still could be influential for influencing who wins In SD-11, African American voters likely are about 25% of the vote, making it easy for those voters to elect one candidate of their choice, and creating a reasonable chance of helping to elect two candidates. Finally, Michigan might well boost its representation of women; today only one of its U.S. House Members is a woman.

Overall, in every district backers of both major parties would almost certainly end up with a representative of their preferred party and have a reason to vote in a competitive election every two years. Using this proportional voting system would ensure Michigan’s electoral outcomes reflect the reality that Democrats have a slight advantage in the state overall, but Republicans can make the state highly competitive. It would mitigate the pernicious effects of gerrymandering that plague our democracy.