Gender Parity: A Case for Fair Voting and Party Rules

Fair voting systems rely on multi-seat districts, which create more incentives for parties to nominate women and for individual women to choose to run. Of the top twenty counties for women's representation, nineteen  use a fair voting system; the exception being Cuba, which does not have multi-party elections. A major reason for this trend is that fair voting systems employ multi-seat districts. Meaning, a given voter will have more than one person representing them and their district. Multi-seat elections encourage efforts to recruit female candidates, as demonstrated by the fact that 6 of the top 10 state legislatures for women's representation have multi-seat legislative districts.

Fair voting describes a wide range of approaches that translate votes into representation. In general, like-minded groups of voters can elect their preferred candidates in proportion to their support in their district. Meaning, twenty percent of the vote would win one of five seats; and earning a majority of the vote would earn three of five seats. Fair voting can take two forms: closed-list systems and open-list systems. Scholars debate which approach is better for women.

Twelve of the top twenty countries for women's representation use closed-list systems. Closed-list describes systems where a voter selects a party, and that party fills its share of seats with candidates in the order presented to the voters on their list. The case for closed-list systems being better for women is that voters tend to be attracted to parties with descriptive (or balanced) lists, incentivizing parties to run more women; and parties can choose to ensure the election of more women simply by putting them higher on the list.

Seven of the top 20 nations for women's representation use open-list systems. An open list system is one that still has a party definition (that is, the vote for a party determines its share of seats), but voters can vote for candidates directly in a way that affects the order of candidates who fill the seats. Advocates of open-list systems being better for women believe voters, rather than party officials, are more likely to choose female leadership. Advocates of each position may be right, as much depends on the context and how open the major parties are to nominating women high up in their list.

The most certain way to get women into office is through national gender quotas. Many countries have set national gender quotas; some states have used gender quotas as a temporary measure, while others have made gender quotas enduring policy. Of the top twenty counties for women's representation, two use gender quotas: Rwanda, ranking first, and Timor-Leste, ranking sixteenth. Rwanda, a country best known as the site of an ethnic genocide in which approximately 800,000 people were murdered, mostly ethnic Tutsis, is now leading the way in women's representation. After the conflict, a new constitution was established, mandating a gender quota that reserved thirty percent of the seats in all decision-making bodies of government for women. Drafters of the new constitution believed women are less prone to violence, which gave credence to the quota after a bloody civil war. In 2008, Rwandans elected twenty-six percent women to their national legislature. And thirty percent of the seats were reserved for women, bringing the total percentage of women in Rwanda's national legislature to fifty-six percent . 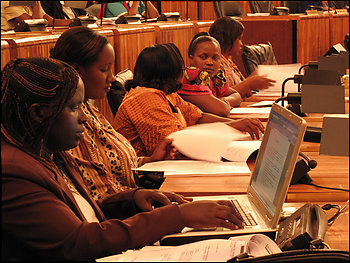 Constitutional gender quotas are certainly an effective way to reach gender parity in politics but there are less severe policy alternatives. Sweden has an open-list system and has not adopted national gender quotas but is ranked fourth for women's representation with women filling forty-five percent of the seats in its nation legislature. Three of Sweden's major political parties, the Social Democratic Party, the Moderate Party and the Green Party, along with a minor political party, the Left Party, have established party rules that promote gender parity in politics. The Social Democratic Party has instituted a zipper system, in which one sex alternates the other on the party list. The Green Party and the Left Party have adopted fifty percent gender quotas. Meanwhile, the moderate party places two men and two women at the top of their list, creating a balance in leadership.

In 1971, women's representation in Sweden was at 14 percent ; it has since more than tripled. The turning point occurred in 1972 when the leaders from two major parties, the Social Democrats and the Liberals, began competing for the female vote. In 1972, the Social Democrats, being in power at the time, instituted a central gender policy unit in government. The same year, the Liberals formally recommended that women should make up forty percent of internal leadership positions. Decades later, several Swedish parties voluntarily wrote gender regulations into the statues of their parties. The Green Party established its own gender quotas from the beginning, when it was set up in 1981. The Social Democratic and Left Parties adopted gender quotas in 1993. Following these gender quotas, "Every second seat for a woman" became a popular slogan in Swedish politics. Sixteen years later, in 2009, the Moderate Party adopted its party rule to promote gender parity in party leadership.

With only eighteen percent of Congressional seats filled by women, the United States should have a more serious debate about concrete measures to ensure women gain equal representation in government. Gender quotas may be politically unthinkable in this political culture, but we believe the major parties will adopt party rules to promote women candidates. Both Democrats and Republicans have already taken a step in the right direction by instituting party rules for gender parity in leadership positions within the parties. The Republican National Committee reserves one position for a man and one position for a woman from every state and territory. Building on that foundation, Democrats and Republicans could develop party rules for gender parity in elective races. Further, we should consider adopting fair voting systems, as they would expand multi-seat district elections, which advance female candidacies with or without quotas.

Our democracy and public life are weaker because we do not utilize the skills, experiences and talents of over half of the population. In a strong democracy, the government should look like its citizens. To that end, it's time to become consensus builders seeking long-term solutions to the underrepresentation of women. Instituting new party rules and fair voting is a good place to start.