Fighting Misconceptions about a National Popular Vote for President

This August 23 tweet by Stephen Fleming, which found significant traction on Twitter, serves as a good example of the mistakes that can cloud an accurate understanding of our current presidential electoral system—and of the National Popular Vote interstate compact (NPV), which would guarantee the presidency to the candidate who receives the most votes in all 50 states and the District of Columbia:

If we abolish the Electoral College, just 146 counties (out of 3000+) could elect a President. Bad idea. @fairvote pic.twitter.com/Nq7DCeAnXV

The tweet attempts to raise fears about NPV by noting that in theory, it would allow voters in just 146 of the United States' 3,143 counties to elect a president, assuming all votes in each of those counties were cast for the same candidate. This framing is flawed in several ways, each of which in fact reinforces the case against our existing process and in favor of electing the president by a national popular vote.

First, while the effect is to imply that a small minority would have outsized power under NPV, the 146-county scenario actually proves the opposite point. Yes, voters in 146 counties could theoretically elect a president under NPV—but only because those 146 counties would, of course, collectively account for a majority of US voters (50.1%), as 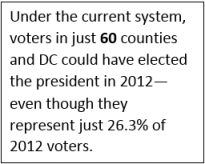 Fleming himself clarifies. In other words, Fleming’s statement could be accurately rephrased as “If we abolish the Electoral College, just 50.1% of voters could elect a President. Bad idea.”

Using counties as a unit of measurement is a clever approach to critiquing NPV, but one designed to mislead: counties are of arbitrary population, so counting them up doesn’t show anything useful about an election that’s measured in votes. Saying it's not fair that 146 counties could outvote the rest is like saying it's not fair that someone with one twenty-dollar bill has more money than someone with one thousand pennies.

Second, our current presidential election process could result—and has resulted—in outcomes that are far more undemocratic than the 146-county scenario, even under the misleading county-by-county framing. Under the current system, voters in just 60 counties in 17 states, plus the District of Columbia, could have come together to elect Barack Obama or Mitt Romney in 2012, as the voting population in those regions would have been sufficient to win bare majorities in enough states to reach 270 electoral votes¹. Crucially, these regions would have included just 26.3% of the 2012 voting population as a whole, meaning this outcome would be radically less representative of voters’ preferences than even the narrowest possible election decided under NPV.

Of course, these scenarios are impossible in practical terms, as no real-world presidential candidate could achieve enough support to win 100% of the vote in even a handful of counties. (In 2012, Texas’s tiny King County came closest, with 139 votes for Romney out of 145 cast—still “only” 95.8%.) And again, counties aren’t a useful way to break down presidential election results. But there’s no need to appeal to exotic hypotheticals to show the failures of the current process: the 2000 presidential election famously saw a winner assume the presidency despite more voters’ preferring a different candidate, as did (less famously) the elections of 1824, 1876, and 1888.

Critiques such as Fleming’s are aided by the intuitive appeal of maps which show a tiny proportion of the country’s geographic area forming a majority of the popular vote. But such maps create the impression of a small geographic minority which can unfairly dominate vast swathes of the country. Besides being unwise in its political assumptions, this is a false perception stemming from the huge size of the United States’ landmass combined with the uneven distribution of the country’s population, much of which is concentrated in geographically small but dense urban areas. This striking 3-D map by Princeton’s Robert Vanderbei is a useful illustration of this point. Fleming’s 146 counties would roughly equate to the map’s 146 tallest peaks, which are scaled in the third dimension based on the number of votes cast in 2012: 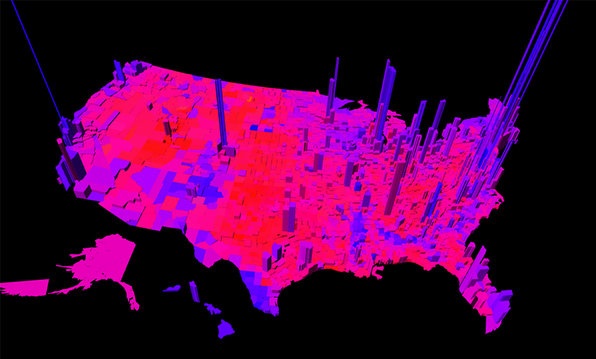 This map by the University of Michigan’s Mark Newman makes the same point in a different way, by scaling the counties in two dimensions instead: 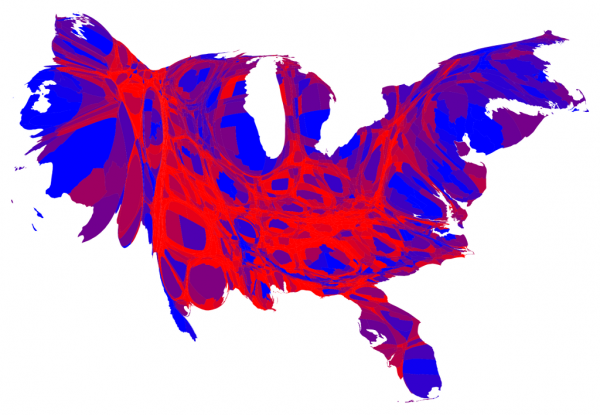 If a presidential candidate could somehow win the votes of all voters in Fleming’s 146 counties, the resulting popular majority would by definition be the result of appealing to voters in the places where most Americans live and vote, despite what a quick glance at a standard map would imply. This extreme outcome, while geographically polarized, would at least be democratic under most common understandings—which can't be said for the bizarre results the current process creates. Take a look at this map showing our 2012 “worst case scenario" under the current electoral system, in which the highlighted areas account for just 26.3% of 2012 voters while still being enough to win the presidency: 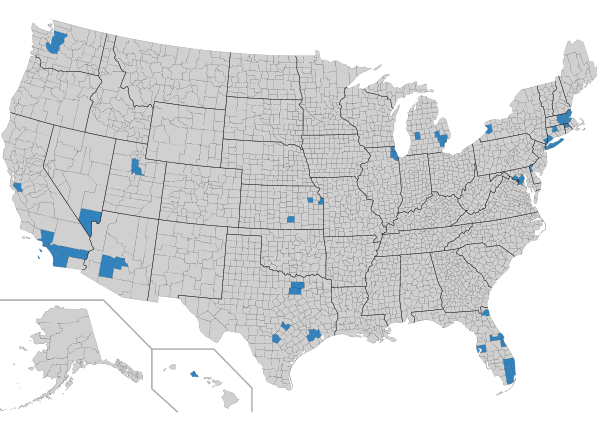 All that said, the 146-county scenario does hint at another common concern among critics of NPV: that presidential campaigns under NPV would be dominated by the country’s largest cities, to the exclusion of rural areas and to the likely partisan advantage of Democrats. While this argument has some intuitive appeal, it is strongly rebutted by FairVote’s recent report on current popular-vote elections and by analyses of the partisan composition of urban, suburban, and rural voters.

For one, if it were the case that presidential candidates would ignore underpopulated areas under NPV and that Democrats would be systematically advantaged, we should expect to observe these effects at the level of statewide popular vote elections, both for president and for state offices such as the governorship. But the heavily contested swing-state campaigns of 2012, for example, showed the opposite—as visualized in this FairVote post, candidates visited a wide range of areas within those states—and Republicans regularly win gubernatorial races in nearly every state, even those characterized by large Democratic cities, such as Pennsylvania and Michigan.

As well, the Democratic advantage in cities is overstated: voters living within metropolitan statistical areas (MSAs) gave John Kerry just 50.6% of their votes in 2004, for example, compared to Kerry’s 48.8% of the nationwide popular vote. Furthermore, current presidential campaigns already famously center on a small subset of the country—those “swing” states which happen to fall within a narrow band of partisan competitiveness. The outsized weight placed on swing states is dramatic and well-documented, and would be removed entirely by NPV in favor of campaigns designed to convince and turn out voters across the country.

A final point: the phrase “abolish the Electoral College,” while common, is both a misdiagnosis of our problem and a false description of NPV as a cure. The problems with our presidential election system are not caused by the Electoral College per se, and NPV would not abolish the Electoral College. The Electoral College refers only to the mechanism by which states are granted the power to elect the president under the Constitution—by allotting each state a number of presidential electors based on the size of its congressional delegation. As often used casually today, the term “Electoral College” refers to the specific means by which most states currently choose to wield that power: by giving all of their electoral votes to the candidate who wins the popular vote within that state. But this particular implementation is neither a constitutional requirement nor a timeless tradition, and in fact results in distortions and perverse incentives which aren’t at all derived from the instincts of the founders.

NPV, far from abolishing the Electoral College, is an alternative method by which states could use the College to exercise their constitutional power to elect the president. Rather than choosing their electors based only on the outcome of the election within single states, states under NPV would acknowledge the national importance of the presidency by assigning all their electoral votes to the winner of the popular vote in all 50 states and the District of Columbia. It’s a solution that deeply respects the states’ exclusive powers while allowing voters across the country, not just those in the arbitrary handful of contested swing states, to participate meaningfully in electing their chief executive—whether in 146 counties or all 3,143.