Felon Disenfranchisement: A Relic of the Past Only Virginia and Kentucky Permanently Bar Former Felons from Voting 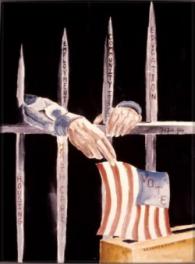 In 48 states, after paying your debt to society for a felony conviction, you get back your right to vote. In Virgina and Kentucky, you don't. Several articles ran this morning about this issue--including a powerful editorial in the Washington Post. The Post editorial tells the story of a woman named  Jennifer McDaniel of Alexandria, VA. For 27 years her life was ruined by a heroin addiction. She was eventually arrested and convicted of grand larceny for shoplifting and served time in prison. Since her release, she has started a new life. She learned how to read and write, got a job at a pet store and graduated from grooming school, where she excelled in her studies. She is now the manager of a pet store. Last month, a judge was so impressed with her progress that he ended her supervised probation. Yet, Ms. McDaniel is still not allowed to fully integrate herself back into society because she is denied the right to vote.

Ms. McDaniel's story is not unique. Voting rights advocates estimate 300,000 Virginians are denied the right to vote because of a past felony conviction. While many states have relaxed their re-enfranchisement policies over time--Maine and Vermont even allow incarcerated felons to vote--Virgina and Kentucky have remained deeply set in the past. According to the Post editorial, while only a fifth of Virginia's population is African American, that population makes up over half of those denied the right to vote because of a previous felony conviction. In The Right to Vote by Harvard professor Alexander Keyssar, he writes about the "shaky" arguments "inherited from the nineteenth century--that felon disenfranchisement was necessary to safeguard the political system." While other states, like Florida in recent years, have moved their felon disenfranchisement policies into the 21st century, Virgina and Kentucky seem unwilling to embrace modernity.

Some civil rights advocates contend that Virginia governor Tim Kaine should act through executive order to reverse this discriminatory policy without waiting for the state legislature to act, but he has given reasons why it is not legally or logistically possible. Even though "prominent universities, civil rights groups and law firms, including Washington and Lee, the NAACP and Hogan & Hartson" believe the governor would be on "solid legal footing," it's possible that politics--not the law--is what is keeping the Democrat from moving forward on this issue. I hope that Ms. McDaniel's testimonial in today's Post, the Brennan Center's Erika Wood's op-ed in the Richmond Times Dispatch and a piece by the Virginia ACLU in the Roanoke Times will convince Gov. Kaine to do the right thing before his term expires this weekend.

FairVote's Board of Directors voted in December to back a resolution calling on Gov. Kaine to issue an executive order restoring voting rights to people with felony convictions. You can take action by clicking here. To read more about this issue, visit our page about Felon Disenfranchisement. For a national standard guaranteeing the right to vote, read about the Right to Vote Amendment. Watch Ms. McDaniel tell her story here.