For State Legislators, Reese’s May Be the Sweetest Thing: Ranked Choice Voting in Action at the NCSL Legislative Summit

After an extremely close, hard-fought two day campaign at FairVote’s booth at the annual legislative summit of the National Conference of State Legislatures (NCSL), Reese’s Peanut Butter Cups emerged as the victor in FairVote’s Rank Your Candy election. Throughout the conference, FairVote’s booth was election central, hosting all 5 candydates for the duration of voting and educating voters on the ranked choice voting process that would ultimately determine the winner. Legislators, staff, representatives from numerous organizations and many others came by the booth to sample their choices and answer a pressing question: which candy did the summit’s attendees prefer?

As you can see in the table above, Reese’s was a strong winner, defeating Starburst 47 to 35 in the final round (57% to 43%). Still, with a crowded field of five delicious candidates, the race was no cakewalk. Among first choices, voters were relatively split between the five candidates. Reese’s led narrowly after the first round with 24 first choices (29%), with Starburst a close second at 21 first choices (25%).

In a ranked choice voting election, every voter has only one vote, but they can rank backup choices in the event their first choice is eliminated. If no candidate has a majority (at least 50%+1) of votes after adding up first choices an “instant runoff” begins. In an instant runoff, the candidate with the fewest votes loses, and the voters who ranked that defeated candidate first have their vote added to the totals of the candidate they listed second. This process is repeated until one candidate wins a majority of all remaining votes. There were three runoff rounds in our election, as Andes Mints, Swedish Fish and Twix were eliminated after the first, second and third rounds, respectively.

As candidates were eliminated and voters’ next choices were added to the totals of remaining candies, Reese’s expanded its lead. Unsurprisingly, much of Reese’s lead came from backup support of the other chocolate candies, as supporters of Twix and Andes mints were more likely to rank Reese’s higher than either of the fruity candies. In the last round, when Reese’s final chocolate ally, Twix, was eliminated, it picked up 15 votes from Twix supporters who preferred Reese’s over Starburst, putting the candydate well over 50% and nearly doubling its vote total from the first round. Reese’s won with broad support; 27 of the final 36 Starburst voters also ranked Reese’s as a lower choice, with nearly 79% of all ballots ranking Reese’s ahead of other choices – a clear example of how RCV winners often reflect a broad consensus.

While supporters of Swedish Fish and Starburst can agree that fruity candies are the best, they weren’t forced to decide which candidate was more likely to win or worry about their vote helping to elect a candidate they did not support. As we can see in the second round of counting, half of the loyal Swedish Fish supporters’ second choices went to Starburst. The same thing happened when Twix was eliminated and 15 votes from chocolate lovers moved on to Reese’s. While we may have spoiled a few appetites sampling the candydates, there was no “spoiler” effect in the election. 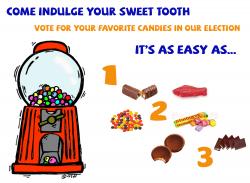 In a vote-for-one-only plurality election with a single winner, candidates typically do not reach out to other candidates’ supporters once they have clearly made up their mind. There would be little incentive for Starburst or their supporters to reach out to backers of Twix, as those voters have already chosen their preferred candidate.

Under ranked choice voting, victory largely depends on how well you do in earning first choice support, but because second and third choices often play a critical role in deciding the outcome of the election, no voter is a lost cause; candidates do better when they seek common ground with backers of other candidates. Even if voters fall into clear groups of voters (like those who prefer chocolate and those who prefer fruity flavors), they rarely move in lockstep. With ranked choice voting, Starburst would still reach out to Twix supporters, seeking second or third choice support. The fact that someone loves Twix bars the most doesn’t mean they don’t also like a Starburst every now and then!

With ranked choice voting candidates have clear incentives to reach out to all voters, not just those who support them as a first choice and not just backers of the candidates who are most obviously similar to them. In a close race, second and third choices can make all the difference between sweet victory and bitter defeat.

In ranked choice voting elections, candidates need to reach out to the supporters of other candidates by asking for second or third choice support. With that in mind, candidates in RCV elections tend to steer clear of divisive or negative campaign tactics that would alienate other candidate’s supporters. For instance, if Starburst had campaigned on an anti-chocolate platform, they would have been less likely to win second choice support from Andes or Twix supporters, which ultimately added nine votes to their final round total of 35. In a close election, this can make all the difference. In a nutshell, candidates in RCV elections should keep it sweet and focus on what makes them a great first choice as well as reasonable second or third choice for supporters of their rivals.

Given the way ranked choice voting changes the incentives for candidates, it’s no surprise that preliminary results from a major two-year study of ranked choice voting elections in Minneapolis, San Francisco, and other American cities using RCV indicate that both voters and candidates observe a decline in negative campaigning in RCV elections.

As is always the case once a jurisdiction has a good ballot design and clear instructions, voters in our candy election handled the RCV ballot easily. They nearly always cast their ballot without any special instructions – that included a few children tagging along with their parents and conference guests from non-English-speaking nations.

Voters were able to capitalize on the opportunity provided by ranked choice voting to express their preferences between the entire field of candidates. Most voters had no trouble ranking choices, and the average number of ranked candies was more than 3. Not everyone could have their first choice win, but among the 39 voters whose first choice lost, all but two had their choices counted in every single round, and a clear majority actually elected their favorite between the two frontrunners.