FairVote's Unique Methodology Shows That 52% of Voters Wanted a Democratic House Mirrors 2010 Republicans Margin of Victory, but with Much Less Impact 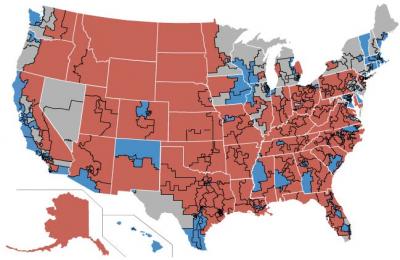 "We just had an election, and the House of Representatives was elected, committed to keeping taxes low."

In Brief: Using its unique methods for analyzing the underlying preferences of voters, FairVote has determined that the Republican Party has a significant structural advantage in U.S. House elections. That advantage was the most important reason why the GOP kept a comfortable majority of 54% of seats in the House despite Democratic candidates having an overall 4% advantage in voter preference over their Republican opponents.

We conclude that there was a general preference for Democrats in 2012 House races of 52% to 48%. The Democratic wave this year had much less impact than the Republican one in 2010 primarily because despite the large Republican majority in Congress, very few Republicans actually represented Democratic-leaning districts--in sharp contrast to the number of Democrats representing Republican districts in 2010.

Overall, Democrats cannot win a majority of House seats without winning dozens of seats in Republican-leaning districts. Republicans, meanwhile, can win a healthy majority of House seats without winning any seats in Democratic-leaning districts. This disparity is tied to the Democrats' inefficient distribution of their votes--primarily resulting from the Democratic vote being naturally more concentrated, and in some cases (such as in North Carolina, where Democrats won four of 13 seats while winning the statewide popular vote in House races) due to gerrymandered maps.

In the aftermath of President Barack Obama's victory over Mitt Romney in the presidential election last week, conservative lobbyist Grover Norquist tried to dispel the notion that Obama's victory gave the Democrats some kind of national mandate. "We just had an election, and the House of Representatives was elected, committed to keeping taxes low," Norquist said in an interview.

But did the Republican victory in the House really represent the will of the American people as a whole? FairVote's analysis of the 2012 House elections says no. To the contrary, the election demonstrated an underlying voter preference of about 52% of the country for a Congress led by Democrats. That doesn't change the fact that Republicans will hold nearly 55% of House seats and the power to act based on that majority, but it does suggest that the popular mandate for Republican policies is at best muddy.

In 1997, FairVote revolutionized the study of American congressional elections by developing and promoting the concept of "district partisanship." FairVote's definition of partisanship was based in the assumptions that the underlying partisan landscape in the United States was 50% Republican and 50% Democratic, even if it might vary in any given year, and that elections were becoming increasingly partisan and increasingly nationalized. We determined a district's partisanship by using the percentage of the district that voted for the Democratic and Republican presidential candidates in the last presidential election relative to the national averages for those candidates.

Partisanship proved to be a powerful predictor of the outcomes of congressional races and, using statewide partisanship, presidential races. It quickly became a popular tool among political analysts. Soon after FairVote developed the concept, Charlie Cook modified our approach (looking at two presidential election cycles rather that one) and came out with what he calls the "Partisan Voting Index," or "PVI." Cook's PVI is frequently cited in analyses of congressional races--though FairVote continues to rely on only one election as an effective predictor of outcomes.

Our assumptions underlying partisanship continue to hold today. The country still seems to be divided almost evenly on party lines, and split-ticket voting has declined even further since the 1990's. In July of this year, using only partisanship data, the length of an incumbent's tenure, and the margin of the incumbent's last victory, FairVote correctly predicted winners in 333 congressional races in its Monopoly Politics 2012 report. All 333 candidates won.

Partisanship is not only a good predictive tool-it also helps to illuminate the underlying partisan bias inherent in the winner-take-all House of Representatives resulting from the fact that the Democratic vote is naturally "packed" into concentrated, urban areas. Today, the median congressional district has a Republican partisanship of 52.2%. If that doesn't seem like a significant advantage, consider this: there are currently 241 districts with a Republican-favoring partisanship, compared to only 194 districts favoring Democrats. In the presidential election, that means that in a dead-even popular vote, the Republican candidate would likely carry nearly 50 more congressional districts than the Democrat.

Looking at the last two congressional elections through a partisanship lens further reveals this heavy structural advantage for Republicans in the current congressional map. It's difficult to determine true overall voter preference in congressional elections just from looking at the number of votes cast for each party nationwide - both because many congressional seats are uncontested and because incumbents nearly always get an advantage in votes regardless of party for reasons such as having been good at constituent service or getting federal contracts steered toward their district.

One way around this problem is to study just open seat races-specifically, how each party performed in open seats relative to the partisanship of those districts. In 2010, for example, Republican candidates outperformed their districts' partisanship in open seat races by 2.2%, en route to a sweeping House victory. This year, nearly the exact inverse was true-Democrats outperformed open seat partisanship by 2.1%. That 2.1% figure suggests that voters tended to favor Democrats this election by a margin of 52-48. But they didn't come close to achieving the Republicans' dramatic victory in 2010.

Another measure of how the parties performed relative to each other in House races is what FairVote has termed the "incumbency bump" - an analytic tool we first used in 2005 to study House elections from 1998 to 2004. The idea of the incumbency bump is grounded in incumbent candidates having many inherent advantages over challengers, including greater resources and name recognition in their districts. The "incumbency bump" has tended to give incumbents an average advantage of 4% to 9% in recent election cycles, depending on overall voter views of incumbents.

Using this measure, the parties' roles were reversed again in 2012. This year, the incumbency bump for Democrats was 6.2% and the incumbency bump for Republicans was just 2.5%, with an overall incumbent average of 4.1%. The difference between the two parties' respective bumps was 3.7%, indicating a national advantage for Democrats of close to 52% to 48%.

But although the shift toward Democrats in 2012 was a less extreme mirror of the 2010 Republican-favored shift, it obviously had a very different impact on Capitol Hill. The Republicans won a decisive majority in the House in 2010 despite facing a large Democratic incumbent advantage, while Democrats made only incremental gains on Republicans this year.

In fact, for the Democrats to have retaken the House in 2012, they would have had to win by historically large margins. The 218th highest vote percentage for a Democrat (only considering votes for the two major parties) was 47%. In order to win 218 seats-the number required for a House majority-Democrats would have needed to win close to an additional 3% of the vote from Republicans. Added on to the 52% margin that they actually did achieve, that would mean as much as a 55% to 45% overall preference for Democrats would have been necessary for them to retake the House by even a few seats.

Many analysts use partisanship to help predict house races, but no one other than FairVote is using the tool to reveal the inherent Republican advantage produced by today's congressional map. This advantage was accentuated by the 2011-2012 Republican-controlled redistricting process, but the natural demographic factors that produced it existed long before and were obscured by Democrats' ability to win many seats in strongly Republican districts - an ability that has become increasingly rare.

The fundamental cause of the Republican advantage is, of course, winner-take-all elections-a reality demonstrated with particular power by FairVote's partisanship-based analytical tools. FairVote has detailed statutory changes that would create a level playing field by moving to modest, American forms of proportional representation that we call "fair voting": see how this solution would work in practice at www.fairvotingus.com. For more information on the effects of partisanship on House races and the 2011-2012 redistricting process, see FairVote's Monopoly Politics 2012 report and especially its national analysis of the post-redistricting congressional map.