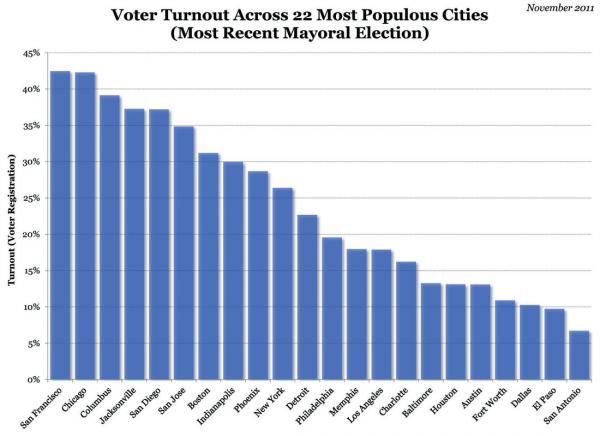 Voter turnout in the most recent elections in America's 22 largest cities ranges from low to minuscule. In mayoral elections taking place from 2008 through 2011, no city had a turnout of more than 43% of registered voters -- which translates into an even lower figure among eligible voters. Of those 22 elections, 15 cities had mayoral voter turnout under 30%, and 11 experienced a turnout under 20%. Two cities, El Paso and San Antonio, had turnout under 10%.

To underscore that fact: in half of America's largest cities, the mayors were elected in elections in which fewer than one in five registered voters voted -- and in two, more than nine out of ten registered voters stayed home.

In the six cities that held primary elections for mayor, none had a primary turnout of greater than 24%. In the second most recent mayoral election of the 22 cities, no city other than San Diego had a turnout above 36%.

The city with the highest turnout in its most recent election was San Francisco, with a relatively strong 42.5%. San Francisco is also the only city of the 22 to use the instant runoff voting (IRV) form of ranked choice voting in its mayoral elections. Even when it doesn't bring new voters to the polls, IRV typically means one single, decisive election takes place when the most voters are likely to participate. For example, by going to IRV, the city of Oakland had a November 2010 election for mayor with the highest turnout in a mayoral election in a generation.

We're about to have a new leader in turnout, as San Diego is holding an election for mayor this November. Riding on the coattails of the presidential election in California, San Diego will soar to the top of the charts. But as we look to a new round of mayoral elections next year in more cities, it's clear that we should have a national conversation about participation in non-presidential elections -- as FairVote is doing with its new Promote Our Vote project, with specific ideas for how cities can take action to spark higher turnout.

Click here for a spreadsheet containing turnout data for these 22 cities for their last three elections, including primaries, first rounds, and special elections.