FairVote in the Supreme Court 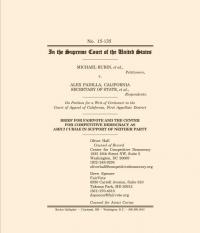 FairVote provides its innovative analysis and pro-voter perspective to activists, local and state policymakers, and to all three branches of the federal government. This month, FairVote submitted amicus curiae (“friend of the court”) briefs along with the Center for Competitive Democracy in the Supreme Court for two cases, each seeking a full hearing before the highest court in the land. Both briefs highlight practical statutory solutions, such as forms of ranked choice voting, to the problem of no-choice elections.

Both cases question the constitutionality of an approach to primary elections, an area where FairVote has considerable expertise. The most common method used in the various states has each officially recognized political party participate in a government-run primary election to decide its nominee; then, each nominee competes in the general election, alongside any independent candidates who petitioned directly onto the general election ballot without competing in a primary.

Few people today appreciate how strange this approach to nominations is, both historically and internationally. Elections in colonial America and into the 20th century included neither a primary election nor even an official ballot listing party nominees. Early elections in the United States were public events - complete with free-flowing liquor - at which people voted by voice or by show of hands. The move to paper ballots at first just consisted of voters bringing their own ballots to a public place and dropping them in a glass box.

Around the 1880’s, general elections started taking on the character they have today. To avoid fraud, states adopted the “Australian ballot,” meaning that voters were given a ballot pre-printed with party nominees. They would then mark the ballot in private; it could not leave the polling place.  This move from voter-prepared ballots to secret ballots helped prevent fraud and abuse, but it also meant that voters no longer filled out their own ballots; instead, a pre-printed list of nominees was presented to them.

Printing party nominees on ballots gave the parties considerable power over who could be elected. To ensure that power could not be concentrated in a few party bosses, soon after the turn of the century began requiring political parties to choose their nominees in publicly held primary elections. Some states then limited participation in these primaries to party members, some also required the parties to include unaffiliated voters, and others allowed anyone to vote in any party’s primary. A multitude of variations sprang up across, and outside of, these broad categories as well.

The United States remains nearly alone in this practice around the world. FairVote’s page on open and closed primaries (and their alternatives) explains various approaches to primary elections taken by various states, demonstrating the variety of methods states employ.

In New Jersey, 47% of voters have chosen not to affiliate with any political party, even though New Jersey has closed primaries. the Independent Voter Project and others sued arguing that primary elections are an integral stage of the election process in New Jersey and that the state therefore cannot condition participation in them on joining a political party. FairVote participated as amicus curiae in this case when it was before the Third Circuit Court of Appeal.

Those suing on behalf of independent voters lost in the district court and in the Third Circuit, with the courts describing their lawsuit as an attempt to “pry open” New Jersey’s closed primary system. Working with the law firm Hogan Lovells at the lower court level, FairVote joined the case to clarify that open primaries are not the only alternative to closed primaries. Its brief highlights the possibility of “top four” primaries, eliminating primaries altogether, adding a separate “public primary,” or any number of other options.

In California, voters approved a legislative initiative in 2010 to abolish nominating primaries and replace them with the “top two primary.” Under top two, all candidates appear on one primary ballot in June and voters can vote for one. Then, the November ballot features only the two candidates who received the most votes in June, with no opportunity for independent candidates to petition directly to the general election ballot nor for voters to write in a different candidate. FairVote has written about the California system and recommended changes to expand voter choice and party association rights. A similar system is used by the state of Washington.

Those suing for greater voter choice in November also lost in California state court, with the courts concluding that limiting the general election to only two is acceptable because “the role played by the general election under the former partisan system is fulfilled by the primary election in the top-two system.” The courts essentially held that the limitation to two in the general election is justified by how open the primary election has become, so FairVote again highlighted alternatives that would be just as open for voters but allow greater choice in November, including many of the same options we highlighted in Balsam.

The Future of These Cases

Both Balsam and Rubin represent cases brought by principled opponents of their respective states’ systems. However, both lost in their respective states, in part because the lower courts misunderstood the role that primary elections play and have played in state elections. FairVote is not taking a side on the legal issues, but by highlighting facts about primary elections and constitutional options available to states, FairVote is helping the Supreme Court reach a more informed conclusion.

Both cases are currently seeking “certiorari” from the Supreme Court: they are asking the Court to agree to consider the cases. Such petitions are more often granted when a party participates as amicus curiae. We hope that our briefs will make a difference.