Fair Representation at the Oscars 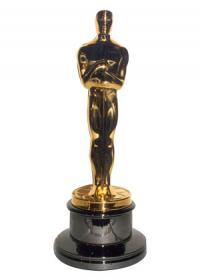 The following post is cross-posted from our Oscars blog, Oscar Votes 123.

In what is perhaps the most well-known use of multi-seat ranked choice voting in the United States, the Academy of Motion Picture Arts and Sciences announced its Oscar nominations Thursday morning. Although just about everyone is aware of the Oscar nominations, fewer people know that ranked choice voting is used to pick them, or what effect that has on the movies that get selected.

Ranked choice voting is a fair representation voting system, which means that a much wider variety of movies get nominated than if the voting were done by a winner-take-all method. For instance, if every academy voter just voted for their ten favorite movies and the ten movies with the most votes got nominated for Best Picture, it would be possible for the tenth favorite movie of 51% of the voters to make it in and the favorite movie of 49% of voters to get left out. The ranked choice voting system guarantees that as long as a movie is the top choice of about 10% of voters, it will be nominated.

It's worth noting that the Best Picture nominations process actually uses a modified version of ranked choice voting, which we previously explained here. Basically, the modification gives extra importance to voters' first choice rankings by eliminating all movies that don't receive at least 1% of first choices and only transferring votes to voters' second choices when a movie exceeds the threshold of election by at least 10%. There is also a variable number of nomination "seats," as anywhere between 5 and 10 movies could be nominated depending on how many end up with more than 5% of the total vote after the two rounds of transfers. All categories other than Best Picture use a more traditional ranked choice voting system.

The Academy's actual ballots are not publically released, but that doesn't mean we can't make some educated guesses about how the voting broke down.

The Best Picture award increasingly looks as if it will be a three movie race between Gravity, American Hustle, and 12 Years a Slave. All three were locks to be nominated, and likely received enough first choice rankings for a fraction of those ballots to be transferred to their voters' second choices.

That left the following movies in contention, according to the experts at award-prediction site Gold Derby, who gave them odds above 0% to win Best Picture:

Captain Phillips was popular enough that it likely would have gotten in regardless of the voting system used, so we can leave that out of the analysis.

It's not as easy to identify blocs of Oscars voters as it is to identify blocs of political voters. Oscar voters are not easily placed on a left-right spectrum. But there are some ways in which voters group themselves that likely translate into Oscar nominations. I'll discuss some of them below, in terms of this year's contenders:

Certain notable directors have, over the course of their illustrious careers, cultivated groups of followers that will be more likely to vote for their movies - in effect, partisans for a specific director. The 2013 movie that most benefited from this was The Wolf of Wall Street, which was divisive among critics but earned a nomination on the strength of director Martin Scorsese's name. To a lesser extent, Her's Best Picture nomination can be credited in part to the loyal following of director Spike Jonze.

A brand-name director is not always enough to secure a nomination, however. Blue Jasmine, Woody Allen's latest production, failed to secure a Best Picture nomination, perhaps due to being released too early in the year to generate much Oscar buzz.

Some Hollywood guilds have a considerable degree of overlap with the Academy. When a guild is in support of a certain movie, it could single-handedly push that movie over the threshold of election. The Screen Actors Guild, for instance, has shown support for Dallas Buyers Club actors Matthew McConaughey and Jared Leto in its own awards. The SAG winners will not be announced until this Saturday, but McConaughey and Leto were nominated for Best Actor and Supporting Actor, respectively, and Dallas Buyers Club was one of five Best Picture nominees. It is plausible that the SAG's support pushed Dallas Buyers Club, which seemed to be on the bubble for a nomination, over the edge.

Some voters of the Academy seem to have preferences for specific types of movies. In particular, the nominations from the last few years suggest that there is a contingent of voters supporting smaller independent "art-house" films and foreign films. Under ranked choice voting, the art-house bloc won nominations for Winter's Bone in 2010, The Tree of Life in 2011, Beasts of the Southern Wild in 2012, and Nebraska this year.

The foreign film-loving voting bloc has had less consistent success, and likely makes up a percentage of the Academy somewhat below the threshold of election. They voted in The Artist in 2011 (which would go on to win Best Picture) and Amour in 2012, but failed to get a nomination for another French movie, the 2013 Cannes Palm d'Or winner Blue is the Warmest Color, for this year's Oscars.

There is really only one national voting bloc of large enough to matter in Oscar nominations: the British. Though they only make up about 4.5% of the Academy with 250 members, that alone is almost all the votes necessary to get a movie past minimum 5% threshold for nomination.

Those voters helped push The King's Speech to Best Picture glory in 2010, and this year they managed secure a nomination for the British film Philomena.

After Britain, the nationality with the next most Academy members is Canada, with just 57 according to the L.A. Times - not enough to have a significant effect on the nominations election.

There are three movies among the contenders that were generally likeable and might commonly be considered "Oscar-bait," but were never able to inspire much passion: Saving Mr. Banks, August: Osage County, and The Butler. These movies might have been ranked in the bottom half of a significant number of voters' ballots, but because of the proportional ranked choice voting system that was not enough for any of them to secure a nomination.

This is by design. The Academy would rather have a slate of Best Picture nominees such that everyone cares passionately about at least one of them, rather than two or three front-runners and then a handful of movies that no one thinks are the best.

Now, let's revisit the list of contenders and categorize them by their "party" in the Academy. This is obviously an inexact science, as the groupings are largely speculative and there is presumably a great deal of overlap among these parties, but it gives some idea of how multi-member ranked choice voting works in practice for the Oscars.

The "legislature" of Best Picture Nominees now resembles what one would expect a body elected under a fair representation voting system without a strong party structure to look like. As a result of the use of ranked choice voting, a broad array of preferences and constituencies will be represented when the nominees are read at the closing of the Academy Awards.

A similar diversity can also be seen in other categories such as Best Director, where Nebraska director Alexander Payne (Art-House Party) and Martin Scorsese (Scorsese Party) beat out Captain Phillips Director Paul Greengrass for the final two nomination spots. Captain Phillips was popular enough to exceed the 5% minimum of votes to qualify for Best Picture, but did not produce enough first choice support to exceed the more challenging 16.7% threshold to win nominations for Greengrass or Tom Hanks for Best Actor.

This year's Oscar nominations are an excellent case study for how fair representation voting systems, and ranked choice voting in particular, elect more representative candidates than winner-take-all systems and empower all voters to help elect a candidate of their choice.