Egypt and the Winner-Take-All Distortion

With 80 million inhabitants, Egypt is the largest country in the Arab world and is of great importance strategically and geopolitically. Although the Arab Spring movement started in neighboring Tunisia, its spread to Egypt greatly increased attention to this unpredented popular movement. The subsequent 2011 revolution that resulted in the ouster of strongman Hosni Mubarak after decades of rule, is a major event in modern history.

There is still much work to be done and great sacrifice still lies ahead, but Egyptians have a historic opportunity to finally realize their democratic aspirations and to cast off the authoritarian tradition that has squandered a nation’s collective potential for decades. Transitions to democracy can be complicated, however, and Egypt’s transition is particularly fragile. The role of its electoral system is particularly important.

In a previous post, we explored the hybrid election system by which Egyptians recently selected deputies to the new People’s Assembly, noting the way in which some deputies were elected using a proportional representation system and others by winner-take-all. In this new post, we analyze the consequences of this framework and examine how these voting rules affected representation within the legislature.

The key lesson is clear: use of proportional representation for half of the parliamentary seats was essential for ensuring a representative outcome. If only American-style, winner-take-all elections had been used, one party would have won almost two-thirds of seats despite earning barely a third of the vote, an outcome that would have been highly destabilizing for a fragile democracy in which political groups fear and mistrust one another. Furthermore, without proportional representation, it is possible that both women and secular parties would have been completely shut out of representation.

The Winner Take All Distortion for Political Parties

The table above dramatically shows the distortion in the winner-take-all seats. It lists the major electoral alliances and parties that contested the parliamentary election, showing the share of seats each group earned under proportionality and winner-take-all.

For instance, the FJP-anchored Democratic Alliance, which won 235 of the legislature’s 498 seats, secured 38.3% of the 332 seats apportioned using party list (PR) and 65.1% of the 166 seats distributed via winner-take-all. In the second column, we report each group’s approximate vote shares for the party list (PR) elections, which is a reliable indicator of the general preferences of the electorate.

A truly democratic system should provide reflective representation in the national legislature that adheres as closely as possible to the expressed wishes of voters. It is therefore informative to compare each political alliance or party’s share of the PR vote to its share of seats obtained under each electoral configuration, by subtracting the former from the latter (as seen in the final two columns). Positive numbers, then, indicate inflation in a party’s representation, while negative numbers show the opposite. The closer this differential is to zero, the more reflective the representation.

As a system of seat distribution, the party list (PR) framework adhered closely to the electorate’s preferences. Returning to the Democratic Alliance, we see that its share of PR seats was just 0.8 above its share of the PR vote, a differential very close to zero that indicates rather reflective representation. Other prominent groups, such as the Al-Nour-led Islamist Bloc, also sported positive differentials close to zero. Rules establishing a 0.5% vote threshold for representation and the highest remainder method of allotting unallocated seats, which naturally disadvantage small parties, account for the small distortion we see. 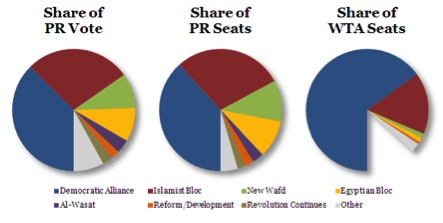 In a multi-candidate field under winner-take-all, voters who select a losing candidate receive no representation. In Egypt, each winner-take-all district election featured two seats, at least one of which had to go to a candidate classified as a farmer or worker. To win a seat, a candidate needed to win 50% + 1 vote in the first round. Unallocated seats were then decided in a runoff between top candidates. If a voter’s two preferred candidates lost in the first round, failed to be promoted to the second round (either because of low vote totals or occupational status), or lost in the runoff, he or she received no representation. Thus, winner-take-all seat distributions can be very different from shares of the vote.

One value some see in the winner-take-all seats is that they opened the Assembly’s doors for independent candidates  who were not able to run for proportional representation seats reserved for candidates belonging to a party. But it was a potentially destabilizing tradeoff – one that could be avoided in the future by exploring such candidate-based alternatives to winner-take-all elections as cumulative voting, single nontransferable vote, and choice voting. Another alternative could be a German-style mixed member seat where the districts outcomes are factored into how many proportional representation seats are elected, with overall party representation ultimately reflecting the party vote. 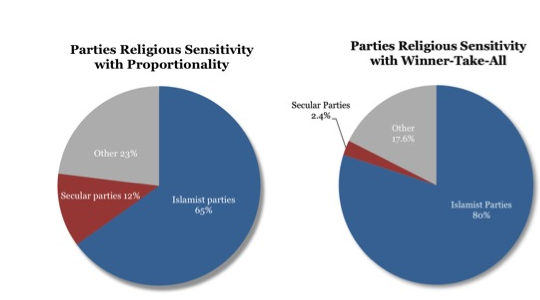 As to the representation of women, out of a total of 508 Members of Parliament, there are only twelve women (2.3%): three who were appointed by the military (the SCAF) and nine who were elected under their party leadership thanks to the proportional representation voting system. (the Egyptian Constitution required the parties to have at least one female candidate on their lists, but their position within was not specified). Not a single woman was elected under winner-take-all.

This contrasts sharply with women’s electoral success in Tunisia, which held elections for representatives to the Constituent Assembly in October 2011. There, women make up 23% of elected legislators.  In Ennahdha, Tunisia’s most prominent Islamist party, 44% of its representatives are women. Tunisian electoral law, which requires parties to alternate between male and female candidates, partly explains this phenomenon. In contrast, Egypt’s election law did not specify where women must appear on a party list, not to mention its use of winner-take-all for some seats.

Distortions between voter preferences and seats have potentially major consequences for policy, as representation translates roughly into political power. In that it fails to adhere to voter preferences, winner-take-all rules lead to power concentrations among alliances or parties in ways that fly in the face of core democratic principles. The Democracy Alliance holds 47.2% of all seats despite only 37.5% of voters expressing a preference for the bloc—all due to winner-take-all. International observers wary of the Muslim Brotherhood and its near majority influence in the People’s Assembly, then, should look with concern upon reforms designed to increase—rather than diminish—the proportion of seats obtained via this method.

For a nation long accustomed to authoritarianism, Egypt’s parliamentary elections were an historic democratic enterprise. Relative to the days of Mubarak, representation has become both more nuanced and reflective of the population’s general preferences. However, as we have shown in this piece, the winner-take-all component of Egypt’s hybrid electoral framework creates severe distortions in legislative representation and commensurate political power. Egyptians still have yet to achieve a People’s Assembly that reflects their interests – and the direction of future elections (toward more proportionality or less) will likely indicate how truly democratic the nation has become.