Does the Candidate Determine the Battleground States in Presidential Elections?

In a Real Clear Politics article last week, Michael Barone outlined a Republican strategy for breaking Democrats’ “blue wall” in the 2016 presidential election.[i] He argued that they should, first, target states where Romney lost by a relatively small margin, and second, target states based on the potential to mobilize voters through a candidate’s characteristics.

We generally agree that the first step is important. But how much does the second step, using candidate-specific qualities as a basis for targeting states, really matter? 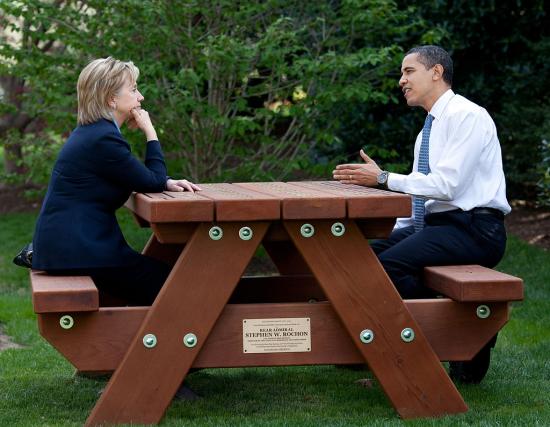 Let’s tease out Barone’s example of Democrats’ strategy in 2008. Barone says in 2008, Democrats first targeted states based on their close margins in 2004, so Iowa, New Mexico, Ohio, Nevada, and Florida. Then, Barone suggests that the next group of targeted states depended on the candidate’s characteristics. Obama may have targeted Colorado, Virginia, North Carolina, and Missouri because of their large minority populations and large blocs of “upscale whites.” Conversely, he argues, Hillary Clinton would have targeted Missouri, Arkansas, Arizona, Tennessee, and West Virginia because of Bill Clinton’s success there in previous elections.

How much did it actually matter that Obama won the 2008 Democratic primary, and not Clinton, in terms of targeted states? We suspect not much. Underlying partisanship, or a state’s preference for Democrats or Republicans relative to the national average, ultimately has a stronger influence than candidate characteristics. [ii]

Furthermore, candidates must recognize that it is very difficult to change a state’s underlying partisanship by more than a few percentage points. In the 2004, 2008, and 2012 elections, an average of only three states experienced a partisanship change of more than 5% (and the large majority of those states did not become swing states as a result). At one point, Barone may have been realistic in imagining larger swings in underlying partisanship, but that is no longer the case.

Several of the states Barone mentions were far out-of-reach for any Democratic candidate in 2008. For example, in 2004, West Virginia and Tennessee had partisanships of 44.8% and 44.1% Democratic, respectively. Why assume that Clinton would have taken her chances vying for unlikely 5-6% increases in their partisanships if she had been the Democratic nominee in 2008, when states like Colorado and Virginia required far fewer Democratic votes to win statewide?

Next, let’s look at Barone’s predictions for 2016. Barone says that candidates will first target the states with the closest margins in 2012, so Florida, Ohio, Virginia, and Pennsylvania. Then he says candidates will pick which states to target depending on their characteristics and who they might appeal to, such as Midwestern, Latino, or wealthy white voting blocs.

But Barone’s list of potential target states is still very short. He only lists eight additional states that candidates could choose between, including Democratic and Republican leaning states. Among these states, they all have partisanships close to 50%.

The important takeaway is that states’ underlying partisanships matter more to candidates than any other factor. An underlying partisanship close to 50% is a necessary pre-requisite to even make the list of possible battleground states. That list is extremely short, even by Barone’s standards only 12 states. The other 38 states and D.C., many of whom make up the “blue wall,” can expect to be ignored by both the Democratic and Republican campaigns, year after year.

All voters should matter in presidential elections, no matter how Democratic or Republican their states are, and no matter how many times their states’ electoral votes have gone to a certain party. All voices should be heard. The best way to ensure this happens is the National Popular Vote plan. Read more here.

[i] The “blue wall” commonly refers to the 18 states and the District of Columbia that have gone for Democratic candidates for the past six elections. They collectively hold 242 electoral votes, meaning a Democrat need only win 28 more electoral votes to win the election.

[ii] A state’s underlying partisanship represents the degree to which a state’s percentages of the vote for the two major party president nominees deviates from the national vote shares for those candidates.

Claire Daviss is a FairVote Democracy Fellow. Follow her @ClaireDaviss_FV.