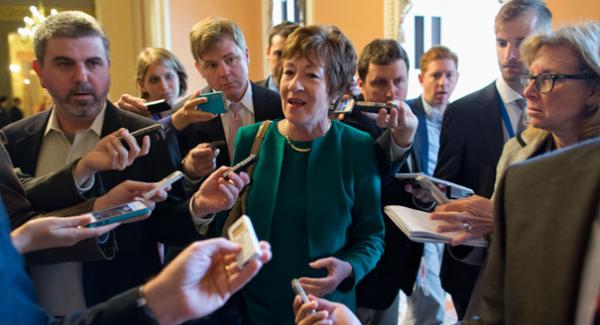 Amid the shutdown-inspired talk of polarization and dysfunction in Congress, it is encouraging to see examples of real bipartisan cooperation. A group of twelve senators – six Republicans and six senators who caucus with Democrats – played a critical role in the last week, working to find a compromise to reopen the government and avert a default on the national debt. As the dust of the shutdown settles, it is worth asking why, even in today’s contentious political climate, moderates are able to drive the debate and be a force for compromise in the Senate, while the House remains mired in polarized dysfunction.

The explanation becomes apparent when looking at the states that the members of the group of twelve represent. Seven of the twelve, including the group’s leaders, Senators Susan Collins (R-ME) and Joe Manchin (D-WV), represent states that were won by the opposing party’s candidate in the 2012 presidential election. “Crossover legislators” like these have electoral incentives to work across party lines and engage in crossover voting, as their reelection is dependent on gaining the support of voters of both parties. It is no wonder that many of the 22 Senators who fall into this category are among the most consistently moderate voices in the chamber.

Crossover representatives are much rarer in the House. Just 26 (6%) of current representatives come from a district where the opposing party’s presidential candidate performed better than he did nationwide in 2012, down from 116 (27%) in 1992.

Not only are crossover representatives disappearing, but the number of districts that are at all competitive has also drastically declined. In over 80% of congressional districts there is essentially no chance of victory for a candidate from the party in the minority in 2014. This lack of competition not only prevents the election of crossover legislators, but ensures that the candidates who are elected need only be concerned with the views of their partisan primary voters, who become the de facto electorate.

Though declining competition in U.S. House races is often blamed on redistricting and partisan gerrymandering, it has more to do with demographic forces and the self-sorting of Americans into pockets of likeminded voters than with partisan attempts to manipulate the electoral landscape. More than ever before, Democratic voters are concentrated in urban areas, while conservatives are in the majority outside of cities. This divide means that no matter how district lines are drawn, winner-take-all House elections will remain uncompetitive and generate an artificially polarized chamber. That is why half-measures like independent redistricting are insufficient for addressing the underlying forces that have broken Congress and led to the shutdown.

If the bipartisan cooperation exemplified by the Senate’s group of twelve is ever to return to the House, the flawed system of winner-take-all elections must be abandoned. The best alternative is fair representation voting, an American form of proportional representation that calls for the creation of multi-member districts with up to five seats. Fair representation voting would be likely to lead to the election of more than 60 moderate representatives in the current political climate, and would give every representative in every district the same incentives that crossover legislators have to listen to the views of voters across the ideological spectrum.

Of course, the Senate is elected using winner-take-all as well, but because Senate elections are higher-profile and voters are more likely to know about the individual candidates running, voters tend to split their tickets more often – voting against their preferred party for a stronger candidate. Senate elections also include all areas of a state, both rural and urban, forcing candidates to appeal a wider variety of voters.

The success of the gang of 12 in helping to end the shutdown does not mean that the Senate is a perfectly functioning body either. It, too, has often been plagued with gridlock and dysfunction over the past year and has grown more polarized in recent decades, if not to the same extent as the House. While fair representation voting is not constitutionally possible for the Senate, other reforms could make compromises like the one forged by the gang of 12 more likely. Ranked choice voting could also be used for single-seat Senate elections, which would further incentivize Senators to appeal to voters across the political spectrum so as to win the second and third choices of their opponents. It may also be no coincidence that five of the 12 members of the gang were women – a disproportionately high number given that there are only 20 Senators in total. If parties focused on recruiting more women for to run for open Senate seats, it would be even easier for female Senators to help broker deals.

The entire shutdown saga is just the latest manifestation of the dysfunction that has gripped Congress.  In both chambers, the feedback loop between a polarizing populace and outdated electoral systems that exaggerate and reinforce this polarization has caused the quality of representation to deteriorate. The senators that helped to find a way out of the crisis represent an estimated 19% of Americans with moderate views, but are among the last of a dying bread in the Senate, and one which has all but disappeared from the House. Reforms that provide fair representation of centrists like these are essential if America is to break free of the gridlock brought on by exaggerated polarization.