Did Lincoln Deliver the Gettysburg Address Because Pennsylvania Was a Swing State? 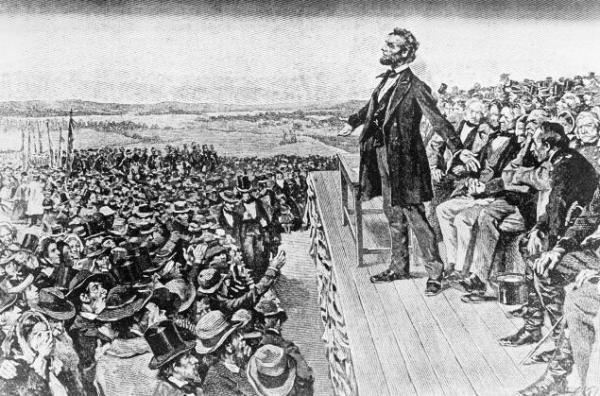 This past November 19th marked the 150th anniversary of the Gettysburg Address. President Barack Obama snubbed his invitation to speak at the commemoration ceremony at Gettysburg. Perhaps Obama missed an opportunity to echo Abraham Lincoln's oratorical masterpiece with one of his own, but the fact is that Obama had no electoral reason to travel to Gettysburg. Had the ceremony been held in October 2012, it's hard to imagine Obama neglecting it, but the President will not be running for re-election in Pennsylvania again.

Not so Lincoln, in November 1863. When Lincoln delivered the most famous speech in American history, he was just gearing up for his 1864 re-election campaign. His victory was far from a certainty; in fact, as late as August of 1864, Lincoln wrote that "it seems exceedingly probable that this administration will not be re-elected." General George McClellan was a very real threat to take the presidency away from Lincoln and change the course of the Civil War.

Lincoln's decision to attend the ceremony at Gettysburg was not a straightforward one. He was loathe to leave Washington, having never done so for the specific purpose of a public event or speech before. But the potential political benefits of appearing at Gettysburg were too great to pass up.

Lincoln knew that Pennsylvania was going to be a swing state in the 1864 presidential election. While more states were potentially competitive in 1864 than today, Pennsylvania was undoubtedly one of the most electorally crucial. Its 26 electoral votes made up nearly a quarter of the 117 votes Lincoln needed to secure victory.

Ultimately, Lincoln ended up winning the state by the slim margin of 51.6% - 48.4%, a difference of less than 20,000 votes. While Lincoln's electoral vote margin in 1864 was a lopsided 212 to 12, after McClellan's campaign faltered and the tide of the war shifted toward the Union with the fall of Atlanta, his national popular vote margin was still only 55% - 45%.

The Gettysburg address did not make the difference in the 1864 election, especially since it did not gain popular recognition as the greatest of Lincoln's speeches until decades later. The speech was even panned by several critics at the time as a political stunt in poor taste: "more for the benefit of his party than for the glory of the Nation and the honor of the dead."

Lincoln's decision to deliver the address in Gettysburg does indicate that the behavior of presidents has long been driven by swing state politics, however. After all, the 1862 Battle of Antietam - the other major Civil War battle fought on Union soil along with Gettysburg, and the bloodiest single-day battle in American history - did not get a commemorative address from Lincoln. Maryland was a much safer state than Pennsylvania for the President (Lincoln won it in 1864 by over 10 points), and had just seven electoral votes.

Of course, the existence of the Gettysburg Address is one effect of winner-take-all Electoral College rules that no one will lament. But presidential favoritism of swing states persists today, with more pernicious effects. During the 2012 presidential campaign, Barack Obama and Mitt Romney held public campaign events in just 12 states after their party conventions. It's safe to say that few of those events produced any great additions to the canon of American political oratory. Furthermore, political scientist Brendan Doherty found that Obama and most other recent U.S. presidents spent a disproportionate amount of time in swing states throughout their first terms in office.

The political motivations behind Lincoln's trip to Gettysburg do not detract from the brilliance and timelessness of his address. But it's time to finally remove the political incentive for presidents and presidential candidates to favor certain states over others, and adopt a national popular vote for president: an electoral system that would better fulfill Lincoln's ideal of "a government of the people, by the people, for the people."