Curing Our Democracy Part II: The Redistricting Connection and the Pitfalls of the District-Based Electoral Vote System Part II

For the prior entry and introduction to this post, see Part I.

Even without reforming electoral vote allocation, Nebraska Republicans attempted to achieve their goal of reducing the competitiveness of the 2nd Congressional District through the partisan redistricting system. These politicians realized that they did not need to discard the district-based electoral vote allocation when attempting to solve their problem of a Democratic presidential candidate competing within the state; they simply could try to redraw the boundaries in a way favorable to Republicans.

By shifting the urban part of Sarpy County into the mostly rural 1st District, redistricting will decrease the Democrat's advantage in the 2nd District while dispersing Democratic voters into an already overwhelmingly Republican district. Republicans have been successful in tilting the districts toward their side, if only marginally so due to the prior overpopulation of the 2nd District. 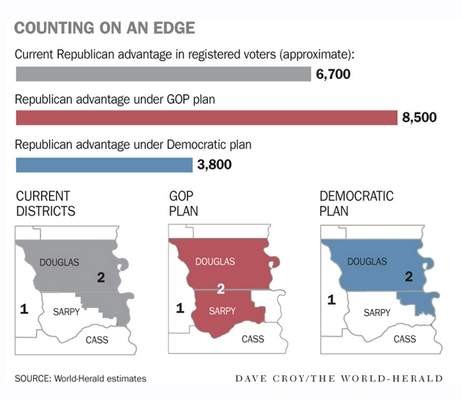 Admirably, however, state legislators in Nebraska did not go as far as they could have; by, for example, dividing urban Omaha voters amongst all three congressional districts. Their Republican counterparts in Texas have shown less restraint by slicing up liberal-leaning Austin into four different districts to disburse Democratic voters and make reelection more difficult for disliked Democratic incumbent Rep. Lloyd Doggett.

And this is where the flawed systems of electoral vote allocation and redistricting collide: even where the goal is not met, the intent and the incentive for partisan gerrymandering remains. In Nebraska, legislators clearly intended for their redistricting plan to serve three interrelated purposes: (1) reducing the prospect of President Obama competing for an electoral vote in Nebraska during the 2012 race, (2) decreasing Democratic voter turnout in 2012 to hurt the reelection chances of Senator Nelson or other Democratic candidates, and (3) securing a more safely-Republican seat for current 2nd District Representative Terry Lee.

Partisan redistricting thus allows state-level politicians to not only choose their own voters, but also attempt to stack the deck against certain candidates running for President, Senate and the House of Representatives. To address these problems, states like California have replaced the legislator-led redistricting process with independent, non-partisan commissions. Such reforms can minimize the ability of partisan politicians to punish their enemies and reward their friends, but for competitive elections and legislative diversity, multimember districts with proportional voting are needed to maximize the effectiveness of these improvements.

Multimember districts with proportional voting would also reduce the ability of politicians to play games with minority populations. Interestingly, Latino residents of Nebraska increased 77 percent over the last decade, and now represent approximately 10 percent of the total population. While Sarpy County as a whole is only 15 percent minority, the city of Bellevue and Offutt Air Base, both of which are being shifted out of the 2nd Congressional District into the highly Republican and white 1st District, are much more diverse at 25 and 30 percent, respectively.

It has been astutely pointed out that such redistricting may raise Voting Rights Act and Equal Protection concerns by diminishing opportunities for minority populations in Nebraska to elect preferred candidates. Multimember districts with proportional voting would alleviate these issues by allowing sufficiently large minority populations to vote together and elect at least one of their candidates of choice. However, as long as partisan redistricting of single-member districts remains the standard, minority votes will continue to be diluted in states like Nebraska.

Maine also offers evidence that the interaction between two poor election practices, district-based electoral vote allocation and redistricting, can lead to consequential partisan manipulation of the system. Early in the 2008 presidential election there were indications that Senator John McCain might be competitive in Maine's 2nd Congressional District. Although McCain eventually lost that district 55% to 43%, the prospect of Republicans picking up an electoral vote in routinely-Democratic Maine has not been lost on state legislators.

Following a court order mandating that Maine redistrict before the 2012 elections in a case that took on partisan overtones, some legislators have reportedly considered splitting the state's two congressional districts in a way that would pit the Democratic incumbents against each other, and affect the presidential race. Indeed, during the last decade's redistricting cycle, state Republicans proposed changing the district line to a north-south configuration that would have forced two Democrats to run against each other in the 2004 election. Redistricting can also be used to influence the presidential race in a state with electoral vote-splitting. The 2nd district already is mostly rural, less affluent, and more conservative than the 1st district, and the Republican-controlled legislature may be able increase such characteristics through partisan gerrymandering. That result might entice the 2012 Republican presidential nominee to campaign in Maine, making a play for one of its electoral votes much like the Obama campaign did in Nebraska in 2008.

Allocating electoral votes by congressional district thus increases the stakes for redistricting and creates incentives for politicians to ratchet up partisan considerations in an already contentious process. Along the way, the interests of voters and communities take a backseat to those of legislators and politicians. Unsurprisingly, the parties to the case have proposed different processes by which redistricting should proceed under the court order. The plaintiffs, who are Maine voters, want to remove politics by allowing a panel of federal judges to redraw the boundaries; Republicans and state officials favor leaving the details to the legislature; and Democrats are emphasizing the need to maintain the state's use of a bipartisan advisory commission. Although the process is now seemingly moving along in a cooperative fashion, the incentive for gaming the presidential race through redistricting remains.

The lesson gleaned from the experience of Nebraska and Maine is simple: electoral vote splitting by congressional district and partisan redistricting has the potential to be a toxic concoction to a properly functioning democracy. Without independent redistricting, the current system allows state legislators the opportunity to poison the political chances of their opponents, and even infect the race for the presidency. In addition, some proposed drugs, such as winner-take-all rules, are worse than the illness, leading presidential candidates to completely ignore large segments of voters and entire states.

There are remedies though. The National Popular Vote plan would make every vote worth campaigning for in a presidential race, and multimember districts with proportional voting would help foster fair elections and fair representation. It's time for the country to get serious about taking its medicine.