California: A Simulated Attempt at Super-Districts 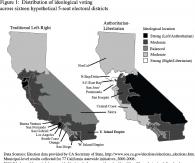 Michael S. Latner and Kyle Roach from California Polytechnic State University, San Luis Obispo have written a thoughtful article on adopting proportional representation in California, based on a simulation-type analysis. Their simulation deals with use of a proportional voting system to elect California’s 80seat Assembly , echoing many of the points we have been making in our series of analyses of the value of the potential use of proportional voting in congressional elections in states such as Michigan and Louisiana.

Latner and Roach conducted a series of simulations using sixteen hypothetical California Assembly districts, each containing five seats. They attempted to estimate how the allocation of Democratic and Republican seat shares in the Assembly would change under a proportional voting system. Then, they proceeded to evaluate how multi-member districts would play out with strategic incentives for political parties and their supporters.

They concluded that California’s political geography is perfectly compatible with a proportional system, and that “wasted votes” effectively get translated into shares of seats. Furthermore, they found that under alternatives to winner-take-all, each party wins at least one seat in each of the hypothetical districts. Republicans capture some seats in all of the Democratic strongholds, gaining a total of 10 additional seats in constituencies where they are currently underrepresented. Democrats also win two seats two districts where they hold none.

They state: “holding voting patterns constant, the Democratic Party would retain a strong majority in the Assembly under proportional representation. However, Republicans would gain four or five seats on average by eliminating the advantage that Democrats receive due to the current electoral system.”

A few words must be said about their findings.

In the last few years, California has been tinkering with incremental reforms to the current, and democratically deficient, winner-take-all system. Yet these piecemeal approaches have done not done nearly enough to repair the ills and constraints of single-member districts, because the fundamental structural problem at play here is not competitiveness, but representation – a problem the winner-take-all system is inherently designed to generate.

By adopting a proportional voting system, that uses multi-member districts, the authors find, using a plethora of statistical data, elections will be more competitive, will improve representative accountability, and reduce the partisan polarization that seems to be such a pervasive feature of the California Legislature.  Proportional voting also would do a fairer job of translating votes into seats.

It thus appears that an alternative system to the current winner-take-all configuration, such as proportional voting using multi-member districts, will most likely create opportunities for new players. In five-seat districts, where there is enough ideological support, some minor parties will also have a chance to win seats if they can secure more than a sixth of the vote.

Although a thorough discussion on race was lacking, there is much to suggest that African-American and Hispanic voters will be more fairly represented under proportional voting. They maintain that ideological or racial divides will be attenuated “by diversifying the composition of both of the major party caucuses.”

What is most important about their finding is that there is an alternative to winner-take-all, and it is likely to work even in a populated, partisan-polarized, state like California. It’s exactly what we need to achieve fair representation for all.