"Battleground Texas" Still Many Years Away

Those seeking to make Texas a battleground state in presidential elections are failing to confront the realities of our winner-take-all voting rules for allocating electoral votes, as well as the increasing rigidity of partisan voting patterns in America. Over the next twenty years, the only way for Texas to ensure that it becomes relevant in presidential elections is to help activate the National Popular Vote plan for president.

Jeremy Bird, who served as National Field Director of Obama for America in 2012, recently appeared on the Colbert Report to discuss his new organization “Battleground Texas.” Founded with fellow Obama campaign veterans, the group seeks to transform Texas from a Republican bastion into a swing state, using “the data-driven, people-focused approach that has helped win grassroots campaigns around the country.” During his Colbert appearance, Bird explained, “Anyone who wants to be our commander-in-chief, they will have to fight for Texas.”

Due to Texas’ growing Latino population, Bird’s efforts seem plausible to some. After all, Latinos nationwide voted overwhelmingly for Barack Obama in 2012. We don’t know how Latinos in Texas specifically voted, as Texas was one of many spectator states where, for the first time in years, no exit polls were conducted in 2012, but there has been speculation that in a few elections, Texan Latinos could could be shifting Texas rom red to purple.

Politicians and public figures have taken note of Texas’ changing demographic makeup and the potential effect it could have on Texan elections. In October 2012, Jeb Bush told New York Magazine’s Joe Hagan that he was worried that “Four years from now, Texas is going to be a so-called blue state. Imagine Texas as a blue state, how hard it would be to carry the presidency or gain control of the Senate.”

On the Democratic side, San Antonio mayor Julian Castro has said, "Within the next six to eight years, I believe Texas will be at least be a purple state, if not a blue state." Actress Eva Longoria, a Texas-native, agrees. In a Politico article co-authored with Gilberto Hinojosa, Chair of the Texas Democratic Party, she wrote, “This might be the last presidential election during which Texas is not considered a swing state. We know that the Latino vote matters in this year’s election. And the sleeping giant of the Texas Latino vote is poised to awaken and alter the fate of every future election.”

But for all the hype, the numbers today tell a different story, making it crystal clear that if Texas becomes competitive for Democrats in 2016 or 2020, then Republicans will be getting crushed in the national popular vote. In other words, if Texas is a close state, then the national vote won’t be – and Texas voters still won’t have a chance to help determine who wins the White House.

Even as Texas’ Latino population has rapidly grown, the state has remained strongly Republican. Democrats last won a presidential race in Texas in 1976. For the four elections from 2000 to 2012, the state’s Republican partisanship - our reliable measure of swing state status, based on how a state votes for president compared to how the nation votes - has consistently hovered at 60%. In order to be considered a swing state, a state must hold a Republican partisanship between 47 and 53%, the closer to 50% the better. This heavy Republican partisanship means that in a nationally close election in any of those years, the Republican nominee would have won Texas by a landslide of 20% (as George W. Bush did in 2000). You can see the state’s steady trajectory from swing state status in 1976 to moribund spectator status in the chart below. The area between the dotted lines in the partisanship range a state would need to be considered a swing state. 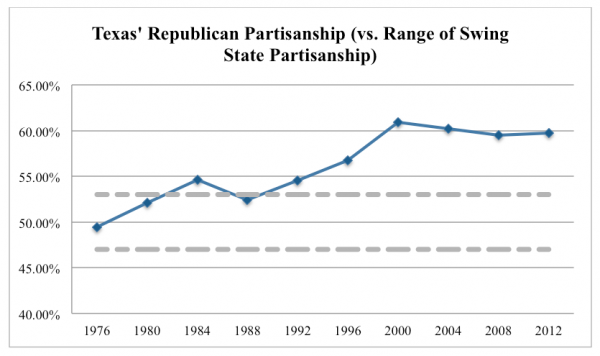 Having such lopsided partisanship rating is especially telling in today’s political climate, in which states rarely shift in partisanship by even two percentage points between presidential elections. Barring a landslide election for Democrats (think Reagan in 1984), in order for a Democrat to win Texas in 2016 or 2020, Texas would need to shift its partisanship by a total of at least ten percentage points.

Between the 2008 and 2012 elections, for example, only three states shifted in partisanship by more than 3.9 percentage points – all small states where their shift toward Republicans made no difference. Alaska reverted back to a more Democratic partisanship (though still very Republican) without Sarah Palin on the ballot. The already rock-solid Republican state of Utah – last won by less than six percentages points a century ago – voted even more heavily for state hero Mitt Romney, a Mormon (like 62% of Utahans) who helped make the 2002 winter Olympics a success. West Virginia continued its ongoing Republican trend.

The New Republic’s Nate Cohn agrees that Texas is a long way off from being a purple state, estimating that Democrats won’t have a realistic chance of winning Texas until 2028. One reason is that while Texas’ Latino population is growing, white Texans may be becoming more conservative. For example, Cohn estimates that Obama’s share of Texas’ white vote decreased by 6% between 2008 and 2012.

The growth in the Latino vote-share can be overstated as well. In 2012, Latinos made up 38% of Texas’ total population, but only 26% of its voting-eligible population. Because much of the increase in Texas’ Hispanic population will come from non-citizens, the actual increase in the percentage of Texas’ voters who are Hispanic will likely only be about four percentage points by 2024, according to an analysis by Yale University’s David Broockman. Even if Democrats were able to register all of Texas’ adult Latino citizens to vote and turned them out to the polls, they will not be able to turn the state blue in the near future unless they make significant gains among other demographic groups (mainly whites) as well.

And of course Republicans are working hard to reverse their slide among Latino voters. By 2024 or 2028, they may have succeeded.

Regardless, it is understandable that Texans would want to “bring the fight to Texas”. Texas’ voter turnout has been consistently low over the last four elections, an average of 6.9 percentage points below the national turnout rate. In addition, the gap between the turnout rates of Texas and the nation has been growing at a rate of about one percentage point each election. 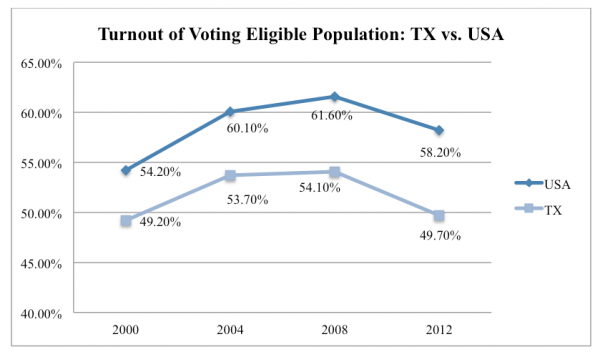 Considering how presidential candidates have ignored Texas over the last decade, this low turnout rate is hardly surprising. In 2012, despite containing a full 7.4% of the nation’s voting eligible population and some of the wealthiest political donors in America, Texas received a grand total of only $2,570 in television ad money after April 11, when Mitt Romney became the presumptive Republican nominee for president. Based on the size of its voting eligible population, Texas would have received at least $62 million in ad spending during that time if the candidates had based their campaigning on where the most voters lived, rather than which states were swing states. Likewise, in 2008, it received only about $64,897 during the fall presidential campaign (mid-September to Election Day), and in 2004, it received $127 during the same period.

Texans, especially politically involved ones, believe this is an injustice. During his appearance, Bird explained to Colbert, “Volunteers want to be relevant, and they want to focus on Texas”, instead of just calling potential voters in Florida and Ohio or traveling to New Mexico to canvass there. They want to campaign within their communities and to see that those seeking our nation’s highest office value their votes and opinions.

Fortunately for Bird and supporters of Battleground Texas, there is another way to make Texas relevant in presidential elections, one that may be more attainable over the next few years than is turning a solidly Republican state into a swing state. If Bird truly wants to make Texas relevant to presidential elections, he should join with the state’s Republicans to organize for the National Popular Vote Interstate Compact – a reform that truly could be in place by 2016 or 2020. The National Popular Vote would make every vote for president relevant in every race, expanding the presidential campaign to every state, including Texas. In a national popular vote, Texas would draw a much larger percentage of campaign attention than it currently does - the attention that it deserves.

Bird is right. Texas voters should matter in presidential elections.  And so should all Americans. With National Popular Vote, that goal will become a reality.