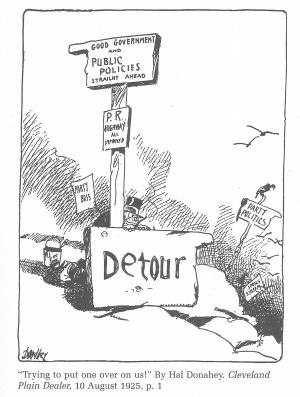 Lawrence Lessig is trying to raise $1 million through crowdsourcing to run for president on a democratic reform platform. As of today, his effort is halfway towards the goal. One leg of his proposal is proportional representation for the US House based on FairVote’s latest plan. I have written in the previous post about how this system would work. This article is about the history of Ranked Choice Voting.

Ranked Choice Voting is not a new idea. It is constitutionally protected and has a long history in our nation. It has been more of a forgotten idea. But this is changing. The reform is reemerging as an alternative to the two round voting used in non-partisan municipal elections. It can also work with partisan elections where the results can mirror the primary / general election dynamic. Here is a very brief account of the history of Ranked Choice Voting. Most of the historical information in the article was taken from Kathleen L. Barber’s books - Proportional Representation & Electoral Reform in Ohio. &, A Right To Representation.

In the mid 19th century, the Industrial Revolution was transforming society in developed nations. Accordingly, the franchise of democracy was affected. There was a fear among elites that the growing middle class would, as a majority of voters, displace the establishment in government. In the early 1860's, the influential English thinker and member of Parliament John Stuart Mill found a way to accommodate majority rule while still give the minority a voice. He came across English barrister Thomas Hare’s pamphlet "On The Election Of Representatives, Parliamentary and Municipal."

In his treatise, Hare was advocating the Single Transferable Vote (STV). We call this Ranked Choice Voting today in our nation. STV also is referred to as Preferential Voting and Hare / Clark Method. The system can be called Instant Runoff Voting when used in single-seat elections and Choice Voting (PR/STV) when used with multi-seat proportional representation.

Australia and Ireland were early converts to the system and still use it to this day with national elections. In fact, Kathleen Barber says there is no tradition of party-list proportional representation in English speaking countries.

In the post Civil War United States, the enfranchisement of black males and an influx of European immigrants threatened the balance of power. Again, the establishment was worried about class issues and the impact on suffrage.

Barber says the South Carolina legislature considered RCV to protect the interests of white minorities during Reconstruction. They settled instead on using the semi-proportional Cumulative Voting. After the military left the state, plurality voting came back. The simple barriers of literacy tests, poll taxes, intimidation and violence became the way to simply keep blacks out of power.

Between 1870 and 1900 more than 11 million European immigrants came to the US. Most of them settled in the cities of the Northeast and Midwest. Political parties met the needs of the new immigrants thus cultivating loyalty. These loyal voters were the base of powerful political machines that dominated the "wards"—which are single member political districts with winner-take-all voting rules.

As a reaction to the rule of the party bosses, there were attempts to reform elections and break up the ward system. In 1872, majority Republicans in the New York legislature passed a bill mandating Cumulative Voting, a form of semi-proportional representation, for New York City. The Democratic governor vetoed this system which would done away with single-seat wards—and instead also give a minority of voters an opportunity to elect a candidate of choice.

Between 1890 and 1920, many progressive voting reforms were put into practice. Women's suffrage, direct election of US Senators, open primaries, ballot initiative and referendum, home-rule municipal charters and non-partisan elections are still with us today. RCV was among these reforms adopted at the time.

RCV took hold in New York City along with cities in Ohio, Massachusetts and other places. Oregonians amended their state constitution to explicitly accommodate it—and this language exists to this day.

The system did what it was supposed to do—give voters more choices by the ability of ranking candidates. Voters were no longer stuck in a ward or district dominated by one party and could choose women, independents or racial minorities without splitting a constituency at the polls. The key is to have multiple seats up for election with the ballot results allocated proportional to the votes cast.

Mill and Hare envisioned the promise of minority representation, but in a sense of protectinggentry from the masses. With RCV in the US, minority representation came true but in a way that helped folks who were usually excluded from democratic institutions. In fact, the federal Voting Rights Act has used forms of Fair Voting (proportional representation) to remedy racially polarized and minority voter dilution voting in places where single-member districts are difficult to create. Over 100 jurisdictions in our nation use this kind of voting for inclusive elections.

The Establishment Pushes Back

At first, opponents of RCV went to court with various suits. They claimed it violated the equal protection of the 14th Amendment. But the Courts disagreed and RCV was upheld as legal.

Opponents then mounted repeal efforts. In most places there was a ballot question calling for repealing RCV every time there was an election! Even though voters repeatedly turned the pro-party machine effort down, the same repeal question appeared on the ballot faithfully, year after year.

After World War II, the Cold War and racial issues came into prominence. In some of the cities using RCV, blacks were getting elected and opponents conducted "whisper campaigns" bemoaning racial block voting. In New York, during the height of the Red Scare, of couple of Communist Party members were elected to the city council. Opponents decried RCV as Stalinist and un-American.

It was these charges, unrelenting repeal efforts and voters forgetting why the system was implemented in the fist place that led to successful repeals. By 1960, all cities except for Cambridge MA, had repealed Ranked Choice Voting.

This fall voters in Duluth Minnesota and the whole state of Maine will be considering the reform. These ballot measures have a great chance of winning. RCV is established in California’s Bay Area, the Twin Cities and Portland Maine.

Now that a leading reformer has added this idea to his unique presidential campaign effort, it looks like Ranked Choice Voting's time for national exposure might be coming after all.