New Jersey’s 2015 state election is striking for the predictive power of partisanship and the proportion of voters who are locked out of representation by a state legislator of their preferred political party. In New Jersey, each of the 40 state districts elects two representatives to the General Assembly every two years. Every four years, the 40 state districts also elect a state senator. That means each New Jersey voter is represented by three state legislators.

The presence of contested elections notwithstanding, the New Jersey General Assembly 2015 highlighted two key phenomena: the predictive power of partisanship in modern American elections and the tendency, when using winner-take-all in two-winner districts, for one party to win all of the seats in a district.

These kinds of results, where partisanship is predictive of the outcome of elections at the state- and national-levels and in odd-year, mid-term, and presidential years, are becoming more and more common in the United States, as voters become less and less likely to split their tickets or vote for candidates outside their political party.

Table 1: Partisanship and Partisan Control in the New Jersey State Legislature after the 2015 Election 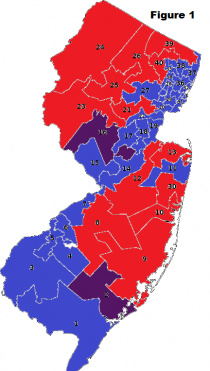 Although almost all districts are contested and a few are even home to competitive elections, most parts of New Jersey are firmly one party territory. All but two districts in the state elected two assembly members from the same political parties (Table 1 and Figure 1), and only two more districts elected assembly members from a different party than their state senator. So, while each New Jerseyan is represented by three elected state legislators, only one in ten is represented by state legislators from different parties. This means that, in 2015, around 30% of New Jersey voters cast a ballot for a General Assembly candidate from the party that is locked out of representation in their district. This includes the 39,000 (46%) Republican voters in District 1 down in the Southern Shore, who are represented by three Democrats in the state legislature, and the 30,000 (44%) Democrat voters in District 40, who are represented by three Republicans.

District 7 is the sole example of a district bucking the dual trends of voting by partisanship and one party domination. It voted 64% for Obama in 2012, and elected two Democrats to the General Assembly in 2015. However, Republican Diane Allen has served in the state Senate for the district since 1998, winning by impressive margins (60% - 40% in 2013) in a firmly Democratic district.

With fairer voting rules, district partisanship would not predict the outcomes of all three seats in each district and one party rule would no longer be the norm. If New Jersey elected its state legislators in three-member districts in the General Assembly, and used ranked choice voting (RCV) rather than winner-take-all, most districts would elect representatives from both political parties to the General Assembly. Table 2 shows a simulation of the results of the 2015 General Assembly election under three-winner RCV, in which a party would win a seat with 25% of the vote in a district. Using the underlying district partisanship to gauge results, only six districts would likely remain dominated by one party. Intraparty competition would occur in all 40 districts, and real competition for seats between the parties would occur in at least eight districts.

In an environment where voters rarely split tickets, New Jersey’s current winner-take-all electoral system ensures that district partisanship is highly predictive of outcomes and that most districts elect three state legislators from the same party. Supporters of the minority party in each district are often left without a candidate of choice representing them. This need not be the case. Under multi-winner RCV, most New Jerseyans would be able to cast a meaningful vote for a candidate of choice in the General Assembly and few voters would be trapped in a district without a representative from their preferred party.