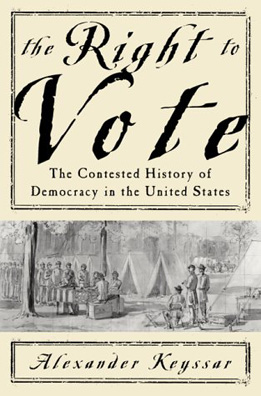 Voter registration originated in the early 19th century as a method of disenfranchisement. Many states were concerned with the growing number of foreign-born transients participating in local government, and so they developed a system of registration to ensure that these non-citizens could not vote. While this did disenfranchise transients and the foreign-born, many poor citizens were also not included on the voter rolls; they were often not home when the assessors came by, which was typically during the work-day, so they were not included. Many areas that were largely Democratic rebuffed the registration system, because most of the poor, immigrants, and other potentially disenfranchised groups tended to vote Democrat.

Near the beginning of the 20th century, other disenfranchisement issues arose, mostly concerning the ability of African-Americans to vote. Laws in the South were designed “expressly to be administered in a discriminatory fashion,” where the validity of a vote due to small mismarks, an arbitrary assessment of a voter’s “understanding,” or other minutia would be subject to the whim of an election official (112).

Between 1870 and WWI, though, most states opted to instate registration, usually to avoid the inevitable conflicts that arose between disenfranchised voters and election officials on Election Day. The Progressive Era also brought new registration developments, allowing citizens an extended window to register, which contributed significantly to the increased participation of working-class people and immigrants.

States mandated the new registration laws individually, so the end result was by no means cohesive or uniform among states. In 1875, the Supreme Court upheld the states’ right to grant suffrage to certain groups in Minor v Happersett, which upheld a lower court’s ruling.

Notable exceptions to the power of the states, in the form of constitutional amendments, arose during the 20th century. Attempts to enfranchise African-Americans culminated in the Voting Rights Act of 1965, which permitted federal examiners to investigate electoral offices in the South to ensure nondiscriminatory voter registration practices. “In Mississippi, black registration went from less than 10 percent in 1964 to almost 60 percent in 1968; in Alabama, the figure rose from 24 percent to 57 percent. In the region as a whole, roughly a million new voters were registered within a few years after the bill [Voting Rights Act] became law, bringing African-American registration to a record 62 percent” (264).

In the 1970s and 1980s, many states were concerned that labyrinthine registration procedures and laws were depressing voter turnout, so they attempted to simplify the process. Turnout was not significantly enhanced by these new reforms, so in 1993, President Clinton signed the National Voter Registration Act, which mandated that states allow citizens to register to vote by mail, at the DMV, or at local public offices, such as welfare offices. Once the bill took effect in 1995, 9 million new voters registered themselves.

Source: Keyssar, Alexander. The Right to Vote The Contested History of Democracy in the United States. New York: Basic Books, 2001. (Buy on Amazon.com)