Voting is an American principle and a basic democratic right that should be protected, promoted and practiced, which is why many people are surprised to learn that the U.S. Constitution provides no explicit right to vote, leaving voting rights vulnerable to the whims of politicians, and some citizens with fewer rights than others.

Add your name as a citizen co-sponsor of the Right to Vote Amendment today!

Why We Need a Constitutional Right to Vote

Even as the rising American electorate gains momentum, new regressive laws, rulings, and maneuvers are threatening voting rights without facing the strict scrutiny that would come with a constitutional right to vote. Too often we run elections on the cheap, opening the door to fraud and abuse, while the existence of 10,000-plus jurisdictions that make their own decisions about how to run elections lead to inequities in voting rules from one place to another. 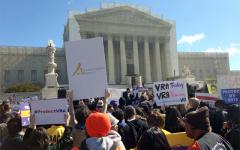 Last year, the Supreme Court struck down Section 4 of the Voting Rights Act (VRA), stripping the Justice Department of the powers it had for five decades to curb racial discrimination in voting. Congress has effectively neutered the Elections Assistance Commission. And many schools skip civic education, contributing to the decline in voter turnout in local and primary elections.

Enshrining an explicit right to vote in the Constitution would guarantee the voting rights of every citizen of voting age, ensure that every vote is counted correctly, and defend against attempts to enfranchise ineligible voters and disenfranchise eligible voters. It would empower Congress to enact minimum electoral standards to guarantee a higher degree of legitimacy, inclusivity, and consistency across the nation, and give our courts the authority to keep politicians in check when they try to game the vote for partisan reasons.

U.S. House Members Mark Pocan and Keith Ellison have shown great leadership in introducing House Joint Resolution 25 (H.J. Res. 25), a bill that would establish an explicit right to vote in the Constitution. Read FairVote's policy brief on the right to vote amendment. See the text of the bill below:

SECTION 1. Every citizen of the United States, who is of legal voting age, shall have the fundamental right to vote in any public election held in the jurisdiction in which the citizen resides.

SECTION 2. Congress shall have the power to enforce and implement this article by appropriate legislation.

Our Work on the Right to Vote

FairVote advocates a constitutional amendment that would grant an explicit right to vote for all eligible voters. Working directly with activists, organizations and elected officials, we are building a critical mass of supporters for the right to vote. Through innovative research and strategic advocacy, we work to enact practices and policies that protect and promote the right to vote.

At the local level, FairVote rallies support for a constitutional right to vote through its Promote Our Vote Project, a pilot program most active in Maryland and Florida.  Its unique change platform works in partnerships to advance resolutions at the organizational, campus, and local level in support of an explicit right to vote in the U.S. Constitution, and concrete changes in practices and policy to ensure fair and equitable voting rights.  The program’s leadership consists of two dozen voting rights experts and advocates.

Based in Maryland, FairVote’s Promote Our Vote Project has worked with local elected officials to build support for city and county right to vote resolutions. FairVote’s Promote Our Vote Project provides services to partners in Florida, as they advance right to vote resolutions across the state. 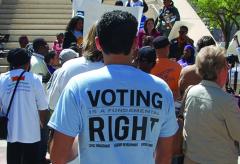 Electoral Dysfunction is a feature-length documentary created by a team of award-winning filmmakers that uses humor and wit to take an irreverent—but nonpartisan—look at voting in America.

Representative Jamie Raskin on the Right to Vote

An Amendment and the Poll Tax: a Piece of the Right to Vote Story

History of a Right to Vote

Event: Is It Time for a Right to Vote in the Constitution

What would a right to vote in the Constitution mean for voting rights struggles? How would it affect the future of the Voting Rights Act and voting rights for the people of Washington, D.C.? Congressman Pocan makes the case for an explicit right to vote in the Constitution. Discussing what the amendment may mean for enhancing a voting rights movement are Washington Correspondent for The Nation John Nichols, Advancement Project co-director Judith Browne Dianis and Color of Change executive director Rashad Robinson. Takoma Park city councilor Tim Male and FairVote's Promote Our Vote director Patricia Hart outline one strategy launched at a local level that holds promise for a realistic roadmap for reform. Mark Schmitt, Senior Fellow at the Roosevelt Institute moderates the discussion.