Equality is fundamental to representative democracy. Therefore, FairVote believes that American voters should be valued equally in presidential elections. Our current Electoral College system, grounded in state laws which allocate electoral votes on a winner-take-all basis, leads presidential candidates to concentrate their resources on voters in a handful of swing states, relegating the vast majority of the country to spectator status.

FairVote focuses on research and education. For advocacy efforts, contact the organization National Popular Vote, which leads the movement to pass this critically important legislation.

What is the National Popular Vote plan?

The bill has had bipartisan support. For example, the most recent state to enter the compact is New York, in April 2014. In the Republican-controlled New York Senate, the chamber approved of the bill 57-4, and majorities of both parties voted for the bill in both legislative chambers. The bill has been enacted by 11 jurisdictions possessing 165 electoral votes - 61% of the 270 necessary to activate it. The bill has also passed 32 legislative chambers in 22 jurisdictions (including the District of Columbia.) A total of at least  2,110 state legislators have endorsed the bill as of April 2014.

Many governors have come out in favor of National Popular Vote. Read what they've said about the effort here.

Many organizations have endorsed the National Popular Vote plan.  Learn more about it at our NPV Facts & Frequently Asked Questions (FAQs) page.

For more information on the National Popular Vote plan, including weekly updates and ways to get involved, please visit NationalPopularVote.com.

For a state-by-state history of the NPV legislation, see http://nationalpopularvote.com/map.php. 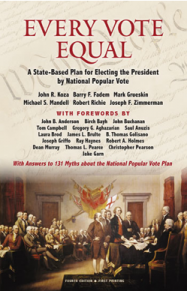 Download your free copy of the new 2013 edition of Every Vote Equal: A State-Based Plan for Electing the President by National Popular Vote, co-authored by FairVote's executive director Rob Richie, today!

What is the Electoral College?

When U.S. citizens vote for president and vice president, they are actually electing a slate of their states' "electors" that represent them, and it is those electors' votes for president that actually count. Learn more about the Electoral College from the links below.

FairVote regularly produces new graphics to visualize our analysis and make the case for electoral reform. Here is one done for reformers in Utah.  To view more factsheets and stats, see all of our Resources and Links.

FairVote.org - Why NPV makes sense (for Utah) from kkellyfv