What is Fair Representation Voting?

A legislature should reflect all of the voters who elect them. For this to be the case, voters must be able to elect representatives in proportion to their number. Fair representation voting describes American, candidate-based forms of voting that respect this principle of proportional representation.

Instead, most elections in the United States are winner-take-all. That means that instead of reflecting all of the voters, our legislators only reflect the one biggest or strongest group of voters that elected them, while leaving all others unrepresented. The near-exclusive use of winner-take-all voting methods in the United States results in partisan gridlock, a lack of representation for women and minority groups, and a lack of accountability as representatives can gerrymander themselves into power, rather than having to face the voters in a truly meaningful election.

A voting method describes how people express their preferences when voting and how those expressions elect candidates. The selection of voting method can have a powerful impact on governance, representation, and voter participation.

Currently, most elections in the United States are conducted by the single-winner vote-for-one plurality method, sometimes called "first past the post." That means that every voter can only indicate support for a single candidate, and then only one candidate is elected: the one who received more votes than any other. This method is winner-take-all, because only one group of voters can possibly elect a candidate, while all others go unrepresented.

Many local and state elections are conducted by block voting. Under block voting, candidates run for multiple seats at-large or in a multi-winner district, and voters are allowed to vote for as many candidates as there are seats elected. For example, the Maryland state house of representatives elects three candidates in each legislative district, and every voter may vote for three candidates. This method is also winner-take-all, because one large group of voters can cast all of their votes for a slate of three similar candidates and prevent any smaller group of voters from electing any others.

FairVote advocates for moving away from these winner-take-all voting methods and instead electing representative using multi-winner ranked choice voting or another form of fair representation voting.

When used to elect more than one candidate, ranked choice voting is a form of fair representation voting. Any group of voters large enough to earn a seat will be able to elect a candidate they prefer. Because of its proven history, its candidate-centric nature, and its ability to allow voters to express their full, honest preferences on their ballots, ranked choice voting is the best fair representation voting method for use in United States elections.

To vote, voters rank candidates in order of preference. Each ballot initially counts as one vote for its top-ranked candidate.

Internationally, multi-winner ranked choice voting is sometimes called "single transferable vote." To see how this method can be used to elect a nation's legislature, watch this video from popular YouTube educator, CGP Grey:

Aside from multi-winner ranked choice voting, two other fair representation voting methods have been used in local and state government throughout the United States: cumulative voting and the single vote method. Additionally, an alternative version of the single vote method is open ticket voting. Each of these is candidate-based and could be easily adapted for use in more U.S. elections. Note, however, that these methods can be more susceptible to gaming or tactical voting than multi-winner ranked choice voting, and so we recommend them only as steps toward the use of ranked choice voting.

Open Ticket Voting: The open ticket method, or "unordered open list system" combines the benefits of fair representation with simplicity for voters and administrators. Voters cast a single vote for a single candidate in a partisan election. Candidates are elected if they pass the same threshold used in ranked choice voting. Additionally, remaining seats are filled by looking at what proportion of voters voted for candidates of the same political party. For example, in a three-seat district in which a majority of voters favored candidates running as Republicans, two seats would be awarded to Republican candidates.

The Single Vote: The simplest fair representation voting method is a variant of "limited voting" (so-called because voters have fewer votes than the number of seats to be elected) called the single vote method. Each voter has one potent vote, and the candidates who receive the most votes are elected. When electing at-large, counties in Connecticut and Pennsylvania are required by state law to use limited voting with limited nominations (meaning that political parties must nominate fewer candidates than the number of seats to be filled). Local jurisdictions in Alabama and North Carolina have adopted the single vote or other variants on limited voting in response to lawsuits brought under the Voting Rights Act. 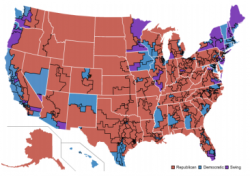 Using a simple "partisanship" metric, FairVote projected the results of 373 out of 435 races taking place in 2016 a mere two days after the election in 2014. This lays bare the uncompetitive nature of single-member district elections. Then, its in-depth analysis makes the case that these elections also make Congress remarkably dysfunctional and unaccountable.

In a dynamic interactive map, Monopoly Politics also demonstrates the fair voting solution: a plan to combine existing congressional districts into a smaller number of multi-member "super districts," each electing between three and five Members by fair representation voting.

A Fair Voting Plan for the California State Assembly

While much of the current dissatisfaction with American politics stems from the effects of winner-take-all congressional elections, similar problems exist in the states. Fortunately, fair representation voting systems can improve elections at all levels of government.

Our Fair Representation voting plan for the California State Assembly would reshape the state's politics by combining assembly districts into multi-seat "super districts," similar to those proposed in Monopoly Politics for the election of the U.S. House. The adoption of such a system would give California voters more choices, more competitive elections, and help promote fair representation of political and ethnic minorities.

Districts Plus is a candidate-based method of electing a state legislature using single member districts as well as additional "accountability seats" to correct distortions in representation.

The fair representation voting methods above all require the use of at-large or multi-member district elections. However, one common international voting method that respects the principle of proportional representation and retains single-member districts is "mixed-member proportional representation" or "MMP." As used in countries like New Zealand, MMP allows voters to indicate a political party preference as well as vote for a candidate and then uses "compensatory" seats to ensure that the overall legislature reflects the partisan preferences of the voters. Districts Plus uses the same principle, but it accomplishes the goals of MMP without resort to party votes: voters only ever vote for the individual candidates they want to see elected.

Fair Voting in the United States

Fair voting has a long history in U.S. elections and is currently used in local jurisdictions throughout the nation. Because fair voting helps to ensure fair representation of racial minorities, it has been used to resolve many cases brought under the Voting Rights Act. Illinois elected its house of representatives by fair voting from 1870 to 1980. At-large ranked choice voting in particular has been used in some two dozen cities, including Cincinatti, Cleveland, and New York City.

Proportional Representation Around the World