The FIFA World Cup is in its final week in Brazil. And while that tournament will eventually crown the best national soccer team in the world, we wondered what it would look like if it was crowning the healthiest electoral democracy in the world. With that in mind, we decided to put together an index that compares electoral health across countries and then apply it to this year’s World Cup.

In the end, the Netherlands came out on top, defeating Australia in a fairly lopsided final. You can see how the whole tournament played out on our blog. 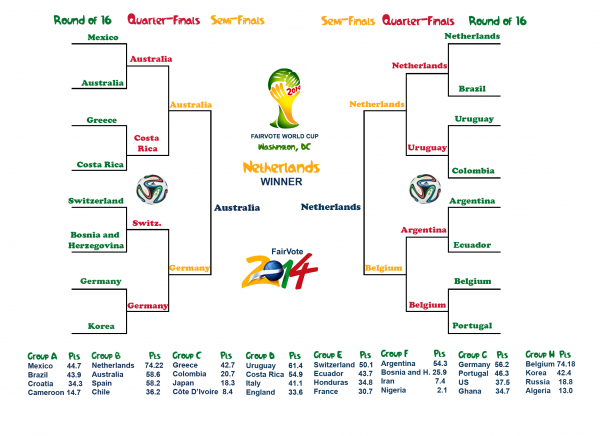 Here is everything you need to know about the World Cup of Democracy:

What does it mean to be the World Cup of Democracy champion?

Winning FairVote’s World Cup of Democracy does not mean that you have the purest or most legitimate democracy in the world. Other organizations, such as Freedom House and the Economist Intelligence Unit, already measure those features (though data from the Economist is part of our metric). This competition is assessing the electoral health of democracies: are voter’s choices and citizen’s opinions translating into representation in government? If the answer is yes, that country will perform well in our index. Legitimacy is still utilized as a way to filter out the more superficial democracies (i.e. democracies with high turnout and plenty of women in parliament but whose elections are less than legitimate), but our prime concern is electoral outcomes relating to participation, inclusion, and fair representation.

How were the winners determined?

Winners were judged on four factors. Scores for the first three were normalized on a 100 point scale. The average of these three scores was then multiplied by each country’s Economist Democracy Index score.

Do citizens make it to the polls? If many people don’t bother to vote, your electoral democracy is probably not healthy – especially if turnout varies by age, income level and educational background. Political participation is at the root of representative democracy, and voting is perhaps the most basic form of participation. Our turnout metric is an average of the turnout of the last two nationwide elections as a percentage of the voting age population, as reported by IDEA. Ideally we would know more about disparities between who is and is not voting in nations, but that information was not available for all nations.

How likely is it that your vote will elect someone? Do political parties receive a share of the power equal to their share of support? These questions are at the heart of measuring fair representation, or “proportionality” in political science terms. To measure this, we use the Gallagher Index, which calculates the overall margin between the votes parties receive and the seats they obtain in a legislature. This index does not measure what percentage of eligible voters directly help elect someone – what we call a ‘representation index’ -- because that data is not available for many nations.

Is your democracy inclusive of underrepresented groups? While an ideal calculation of this would include racial, ethnic and religious measures, what constitutes a minority is so varied across countries that it is too difficult to encapsulate in a single metric. Instead, the percentage of women in government serves as a good barometer for understanding how well a democracy represents those who are traditionally excluded. In particular, drawing on the Inter-Parliamentary Union, we use the percentage of women in the lower house of the legislature, since almost every lower house is directly elected.

Is your democracy a sham? If your elections are rigged, it doesn’t matter how inclusive your legislative chamber is or how many people show up to vote. We use the Economist Intelligence Unit’s Democracy Index, which measures the robustness of democracies, as a multiplier in our calculation. This ensures that superficial democracies, which look good on the surface, are not unduly rewarded. We gave it extra weight in our formula.

How did the United States do?

Some might be surprised to see that the United States did not make it past the group stage. Not even Tim Howard could save the US from its weak turnout and poor representation of women in Congress. Out of 32 countries, the US was 21st in terms of women in the legislature. Even worse, the US was 27th in turnout. Low turnout generally means a skewed electorate, and the low level of women’s representation implies that we are struggling to represent all groups equitably. The United States in fact would not make the semifinals even if looking only at the Economist’s analysis, suggesting that our deteriorating electoral health – falling farther behind other well-established democracies on our core measures – may be having an impact on our overall democracy.

The United States’ placement indicates an electoral system that could benefit from reform. You can read more about FairVote’s proposed reforms that would enhance women’s representation, increase voter turnout and improve fair representation.

Were there any upsets?

Some will also be surprised that a country such as Argentina was able to score higher than the US. It is important to note that we are not measuring the quality of governance in our index, but rather electoral outcomes. Argentina does well in each of our categories regarding electoral inputs and outputs, and while they do not ace the Economists’ Democracy Index with flying colors, they do well enough to be categorized as a “flawed democracy,” maintaining a decent score in our index.  Over time, we suspect Argentina’s electoral health will lead to overall improvement in its democratic performance.

Let’s get back to the fundamentals.

You can find all of our sortable data and calculations here which allow you to see which nations are best in each category. We hope that this serves as a foundation for building an index that serves to compare democracies around the world, not only measuring how free or fair they are, but also how successfully they represent the people they serve.

Stay tuned for our next edition of Dubious Democracy, where we have rated states in congressional elections. Historically we have done a relative index, but the method presented here is a step towards an absolute measure that will allow for more meaningful comparisons.