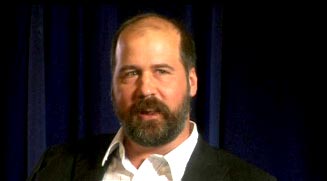 Krist Novoselic has been chairman of the board at FairVote since 2008. He first became politically active while playing bass for the band Nirvana in the early 1990s. Novoselic published his book "Of Grunge and Government: Let's Fix This Broken Democracy" in 2004 and joined the FairVote board in 2005. This is the first of The Chairman's Corner series.

FairVote's vision of election reform has been making excellent progress. We've seen wins in cities and states for ranked choice voting, the National Popular Vote plan for presidential elections and voter registration changes that advance the goal of full and accurate rolls.

Our ideas also keep moving farther into the mainstream. The Washington Post on April 6th wrote an editorial in favor of ranked choice voting. The New York Times has become a champion of the National Popular Vote plan. The Voter Empowerment Act bill has 126 congressional sponsors for the goal of modernizing voter registration. FairVote staff and Board members regularly are printed in our nation's leading publications. 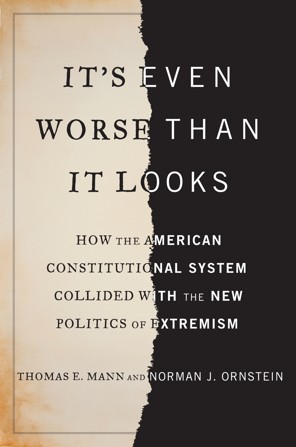 I was particularly pleased to read the new book by two of our nation's leading political scientists and most influential pundits, Thomas Mann and Norman Ornstein. Their new It's Even Worse Than It Looks: How the American Constitutional System Collided With the New Politics of Extremism makes a cogent case for how best to reform our elections. They feature ranked choice voting (RCV, also known as instant runoff voting), independent redistricting commissions (IRC's), changes to boost voter turnout and American forms of proportional representation (PR) - what we call "fair voting" in our new feature on how such systems could work in U.S. House elections.

On May 20th they published a commentary in the Washington Post addressing widespread concern over the polarization in Congress and the authors briefly examine reform proposals - expressing what they think will and what will not remedy our current state of broken politics.

Here's what they have to say about independent redistricting commissions:
"With the partisan redrawing of congressional district lines skewing American politics, we support a redistricting process that - like several states have done - uses independent commissions to draw the lines based on respect for communities' boundaries and for real political competitiveness. It is no cure-all (none of these solutions is), but such an effort could contain and possibly reduce our escalating partisanship."

IRCs are a good way to lessen the influence of political insiders on the redistricting process. But these commissions only go so far and even the authors say it is no cure-all. Mann and Ornstein don't expand on this point in the editorial but in their book finger single-member districts as the culprit and reach to the heart of the matter by suggesting American forms of proportional representation grounded in our own traditions.

FairVote supports well-designed IRCs. Still, we recognize that when tied to single-member districts, they still produce winners and losers in most elections before any ballot is cast. The usual result is the safe-seat dynamic where incumbents run unopposed or face uncompetitive challengers. These safe-seat legislators then have little incentive to reach beyond their base.

It would be great if every single-member district were competitive, however, competitiveness simply can't be the only criteria an IRC need consider when seeking a fully representative legislature. Applying various important criteria is why IRCs can produce safe-seat districts that benefit one party or another - for more, check out our resources on redistricting and state-by-state data in Dubious Democracy: 1982- 2010.

FairVote agrees with the Mann and Ornstein position in their book (page 149) supporting American forms of proportional representation. They write, "Any group of like-minded voters should win legislative seats in proportion to its share of the popular vote, [proportional representation] facilitates the direct representation of racial and political groups and encourages multi-party systems and broad coalitions within legislatures." They go on to recommend candidate-based fair voting systems with higher thresholds than European party-based / low threshold voting. (See FairVote's research on Choice Voting and Cumulative Voting.)

We also agree with Mann and Ornstein on ranked choice voting when electing a single winner like governor. In their Washington Post commentary they write:

"Another option that would help make votes more accurately reflect the electorate's real feelings is instant runoff voting, where voters can rank their candidate preferences. Such a system produces majority winners, eliminates the spoiler role and reduces the "wasted vote" calculation for minor-party candidates, allowing them to participate more fully in the election process. Building more legitimate majorities in this fashion could extend the electoral reach of the major parties and thereby reduce their polarization."

Ranked choice voting is proven here in the United States and abroad - including elections in the past year for mayor of London, mayor of San Francisco, president of Ireland and Australian parliament. It is a constitutionally protected voting system with a long track record. It certainly deserves the endorsement of Mann, Ornstein and other establishment commentators and leaders.

Mann and Ornstein remind us that things will not get back to normal on their own. They add, "There is a more sensible and promising reform agenda, one more focused on fixing the party system and addressing the roots and the weapons of political partisanship."

I am happy FairVote's reforms speak to this sentiment. I'm pleased that we're finding ways to make our reforms viable in the United States - and ways that you as readers can get involved in our work where you live. Stay tuned for the unveiling of our FairVote Action website this summer, and keep up with the latest on Twitter, Facebook and our blog.