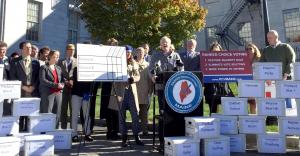 Maine electoral reformers delivered over 70,000 signatures, mostly gathered by volunteers, to the Maine Secretary of State today in Augusta. The Committee for Ranked Choice Voting, a grassroots group of Maine citizens, has garnered broad support from across the political spectrum, all with a singular focus: uphold majority rule and give voters a stronger voice in elections.

The signatures move the citizens initiative for ranked choice voting (RCV, also called instant runoff voting) a big step closer to being on the ballot in November 2016. Prospectively, the first use of RCV for all state and congressional primary and general elections will happen in 2018. Speakers at the press conference making the case for RCV included Polly Ward with the League of Women Voters of Maine, former state senators Dick Woodbury (I) and Peter Mills (R), state representative Diane Russell (D), and deputy mayor of Brewer Beverly Uhlenhake (D). The campaign also released a new video today describing the benefits of RCV in Maine.