FairVote Voices is the podcast of FairVote. Twice monthly, one of FairVote's fellows interviews some leader in elections who is working to promote important democratic reforms. Check us out on the iTunes store, where you can also rate us and leave a review!

On the latest episode of FairVote Voices: An interview with Mayor Mike Brennan of Portland, Maine on how ranked choice voting influenced how he campaigned and how he governs. 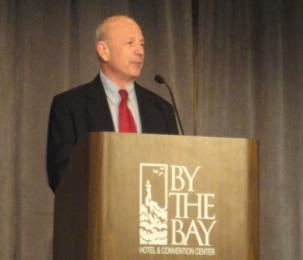 May 15 and May 20, 2013: A history of FairVote and what it does: In this special two-part episode, Drew Spencer interviews FairVote Executive Director Rob Richie about FairVote's history, reforms, and projects.

February 18, 2013: Legal fellow Drew Spencer is interviewed by Mark Haim of Evening Edition on KOPN in Columbia, Missouri on ranked choice voting in Columbia and elsewhere.

January 7, 2013: As part two of a two-part series on the intersection of fair voting and the Voting Rights Act, legal fellow Drew Spencer interviews Alabama-based civil rights attorney Ed Still on the use of fair voting in Alabama.

December 21, 2012: Advocacy fellow Lizz Hudler interviews Victoria Bassetti, author of Electoral Dysfunction, and speaks with FairVote staff and interns about why they vote.

December 14, 2012: As part one of a two-part series on the intersection of fair voting and the Voting Rights Act, legal fellow Drew Spencer interviews political scientist Richard Engstrom on the use of fair voting to achieve representation for racial minorities in local elections.

Also, be sure to check out FairVote's former podcast, the FairVote Democracy Podcast!